Wolfwalkers, Girl from Mogadishu on release, Mank on demand, Crock of Gold on both 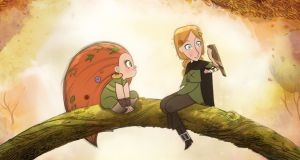 WOLFWALKERS ★★★★★
Directed by Tomm Moore, Ross Stewart. Voices of Honor Kneafsey, Eva Whittaker, Sean Bean, Simon McBurney, Jon Kenny, Maria Doyle Kennedy. PG cert, gen release, 103 min
The latest animation from Cartoon Saloon – creators of Song of the Sea and The Secret of Kells – concerns a young English girl’s encounters with lupine shapeshifters in Kilkenny during the Cromwellian atrocities. As ever, the film is eye-watering gorgeous: a grid-based city contrasting with organic whorls in the possessed countryside. This time round the directors have upped the narrative discipline to produce a rollicking adventure of the highest order. A PG folk-horror Inglourious Basterds for all the family. Strong heroines. Hissable villains. DC

Working from a screenplay written by his father Jack, Fincher looks into Herman J Mankiewicz’s traumas while working on the screenplay for Citizen Kane. Mank postulates that Mankiewicz (Oldman) was the near-sole author of Citizen Kane, a theory that has been subsequently debunked and demolished. Movie fans, even those annoyed by the liberties, will, however, swoon over the sumptuous monochrome recreation of Hollywood’s Golden Age. One thinks of Oliver Stone’s JFK. It’s spectacular! It’s a tour du force! It’s counterfactual nonsense! TB

This gruelling doc feels like an endurance event for director Temple, a film for which The Pogues frontman reputedly refused to give an interview. It falls to archive footage, dramatisation, animations, and interviews-by-proxy to form the narrative. In contemporary footage we are left with chums and enablers such as Johnny Depp, who also acted as a producer. Depp, Gerry Adams and others sit down with MacGowan for the rounds of the title. The man himself is in a sorry state, wheezing and hissing from his wheelchair. TB

Ifrah Ahmed (King) came to Ireland from Somalia in 2006 and, apparently tireless, ended up as our most prominent campaigner against female genital mutilation. She is an unqualified credit to the nation and to the world. It is, thus, a shame that McGuckian’s biopic is so pallid. The facts are all here, but A Girl from Mogadishu is, sadly, shot in the bland, distanced fashion of the dramatised inserts for a documentary TV series. A strong cast does its best, but this is distinctly so-so stuff. DC