Actor, who was diagnosed with cancer, was a key figure in German cinema 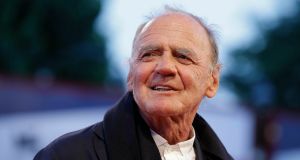 Actor Bruno Ganz, who died of cancer at his home in Zurich on Saturday aged 77, will be popularly remembered for two roles: as the bemused, partially earthbound angel in Wim Wenders’s Wings of Desire (1987) and as a declining, unrepentant Adolf Hitler in Downfall (2004).

A very 21st century class of fame arrived when his “Hitler Rants” were recycled in endless YouTube videos satirising the week’s current outrages. But, even before Wings of Desire, Ganz had secured his reputation as a key figure in the new German cinema of the early 1970s.

“Ah, yes. The four names,” Ganz told me a few years ago. “Volker Schlöndorff, Werner Herzog, Wenders and Fassbinder. That was indeed a very exciting time.” He starred in The Enigma of Kaspar Hauser (1974) for Herzog. His role as the manipulated Jonathan Zimmermann in Wenders’s The American Friend (1977) secured him international cool. He appeared in Schlöndorff’s anti-war film Circle of Deceit. Only Rainer Werner Fassbinder eluded him. “I met him in Bremen a few times,” he said. “But he had his own family of actors.”

Ganz had a large, brooding presence that was moderated by a disconcertingly melodic voice. Though imposing in appearance, he knew how to seem the most reasonable man in the room when that was required. That flexibility won him overseas roles in film and enormous respect in European theatre. His death renders the Iffland Ring – an item bestowed on “most significant and most worthy actor of the German-speaking theatre” – temporarily without a finger. The ring’s next wearer is traditionally outlined in the previous holder’s will.

There was some controversy in Germany at the awarding of the Iffland Ring to a Swiss actor. Ganz was born in Zürich to working-class parents in the early years of the second World War. He never fancied doing anything else. Following his stage debut at the age of 20, he worked steadily throughout the 1960s and was a founder member of Peter Stein’s radical company Schaubühne in 1970.

It fast became the most celebrated theatre group in artistically fecund Berlin. Though unfashionably loyal to the text, they broke whole volumes of theatrical taboos. They were also fiercely political. This was an era when young West Germans were calling attention to the amnesia that allowed former Nazis to occupy positions of authority.

“Clearly we were actors and theatre people, but we understood ourselves as being part of 1968. It was definitely left-wing theatre,” he told me decades later. We were sitting in the umpteenth floor of the Ritz-Carlton Hotel overlooking the grand, impersonal corporate spaces of the new Potsdamer Platz. “They had a chance to build a whole new inner-city,” he said. “And they did this. I just don’t like it. For so many years Potsdamer Platz was this great empty field and then they did this. It is such a pity.”

Spurred into activity by the bourgeois complacency that accompanied the nation’s post-war economic miracle, a new generation of directors – the four mentioned above in particular – made a series of cynical, radical films that, in the manner of the French new wave a decade earlier, helped forge a fresh national cinema.

The films of Wenders and Herzog are vital messages from post-War Europe and Ganz was an essential part of the new movement’s triumph. Ganz admitted wryly that he saw himself as a moderating force between the famously mercurial Herzog and the borderline deranged Klaus Kinski, his co-star in that director’s Nosferatu. He also conceded that he had fought with Dennis Hopper on the set of The American Friend.

“I was jealous because he was a Hollywood star and I was nothing really,” he said. “He made a very nasty remark about blind people and my son is blind – which he did not know. So I began kicking him and we had a little fight. Back then when I was drunk I could get into fights quite easily.”

A full 10 years later, Wenders offered him the part of the reluctant angel in Wings of Desire. The film could scarcely have been better timed. Ganz prowls sadly about a monochrome Berlin that seems tired, despairing and desperate for spiritual renewal. Two years later the Wall came down and the film prematurely became a historical artefact.

“People really seemed to think of me as a guardian angel,” he said. “People would bring their children before me for a blessing or something. And, when flying on aeroplanes, they would sometimes say: ‘Now you are with us nothing can happen.’”

There had been some wild years. He had not always been easy. But Wings of Desire secured him something like international treasure status: the Swiss actor who ruled German performance. He was from everywhere and nowhere. David Hare, who directed Ganz in Strapless (1989), thought of him as “displaced, alienated and rootless”. It was, perhaps, a little easier for such a man – rather than a German – to play Hitler in Downfall. There was less baggage. He did not have to answer questions about his own family’s role in the Reich.

“I was sometimes glad that I could put my Swiss passport between Hitler and myself,” he said. “I am thus protected in some way. A lot of friends my age – German friends – have big problems with their parents.”

He somehow failed to secure an Oscar nomination for that role (though Johnny Depp got in for Finding Neverland). But Ganz’s already lofty position in the firmament was confirmed. He worked steadily until a diagnosis of cancer last year. His performance was the undoubted highlight of Lars Von Trier’s recent The House that Jack Built. Ganz’s turn in Terrence Malick’s Radegund will be seen later this year. The premiere should be an emotional experience.