The Kid Who Would Be King: Camelot meets Grange Hill 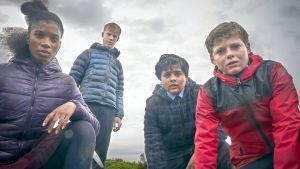 Film Title: The Kid Who Would Be King

Joe Cornish’s retelling of the King Arthur myth in suburban London looks and feels like something the BBC might have broadcast on a Tuesday afternoon during the mid-1980s.

The juvenile actors are satisfactory without doing anything to trouble the scorers at Bafta. It engages with social issues, but remains firmly in the middle ground mapped out by Grange Hill and Blue Peter. The special effects are charming rather than spectacular.

Even the cultural references seem plucked from another era. When asked how she learned to drive so adeptly, young Kaye (Rhianna Dorris) replies: “Mario Kart.” Mario Kart? Really? The equally fresh-faced Alex (Louis Ashbourne Serkis, son of Andy) explains that he’s not yet “old enough for a paper round”. Paper round? What? Joe Cornish turned 50 last December.

Yet this quaint, modestly diverting entertainment – whose starriest performer is a briefly glimpsed Patrick Stewart – somehow cost $60 million and is already on its way to registering as one of the year’s biggest flops. A fair amount of that loot must have gone in to generating digital effects that pointlessly ape the classic stop-motion work of Ray Harryhausen. I know a bloke who can do that on his laptop for beer and cigs, mate.

The Kid Who Would Be King follows Alex, child of a long-suffering single mum, as he locates Excalibur in a building site and, after winning over the bullies, sets out to save the nation from the malign attentions of Morgana (Rebecca Ferguson, who spends much of the film encased in a tree). He is helped by a version of Merlin who, despite apparently passing for a 16-year-old, looks no younger than the 24-year-old who plays him (Angus Imrie, son of Celia).

The film is paced too quickly at the beginning and too slowly at the close. Within minutes of the titles rolling, our hero has grasped the sword and contemplated his role as the chosen one. It ends satisfactorily after 90 minutes and then drags on for another sluggish half hour.

Something uncertain is also going on with the politics. There is much talk about division and despair in British society. When someone suggests that “evil turns people against one another” we could be forgiven for thinking we’re watching one of many expected Brexit movies. Yet all this merrie England, brave Camelot and mighty Excalibur stuff plays like something from a Ukip recruiting video.

No matter. Though overlong, The Kid Who Would be King is zippy enough to tide us over until John Craven’s Newsround.

Patrick Stewart returns to Starfleet: ‘It’s inconceivable to me that I should retire’
3 Welcome to the child sex capital of Europe
4

Rise of the killer robots: The future of war
5