The festival is back with a sponsor and boasts new world cinema, fresh Irish releases and a host of famous guests 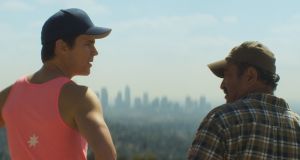 The festival opens with a screening of John Butler’s already well-reviewed Papi Chulo.

The Dublin International Film Festival had a difficult time of it last year. The programme was as busy as ever. The guests were plentiful. Then the Beast from the East came in and laid havoc all around. Screenings and flights were cancelled. A short walk from the Irish Film Institute to Cineworld became an adventure in polar exploration.

Now working with Virgin Media as a title sponsor, the event is returning with undimmed vigour. VMDIFF (as I guess we now call it) offers punters new world cinema, fresh domestic releases and a clutter of famous guests. Fingers are crossed for vernal rebirth.

The festival opens with a screening of John Butler’s already well-reviewed Papi Chulo. The director of The Stag and Handsome Devil steps up with a serious comedy about an LA weatherman who makes friends with a Mexican gardener after finding himself unhappily alone. The film went down a storm at last year’s Toronto International Film Festival.

Paul Duane, the veteran Irish director of documentaries on Bernard Natan and John Healy, delivers his much-anticipated answer to the question: What did the KLF do next? What Time is Death follows Bill Drummond and Jimmy Cauty, key members of that band, as they seek to build a pyramid out of “34,952 bricks made from the remains of dead people”. That’s what they do.

Fresh from rave reviews at the Sundance Film Festival, Garry Keane and Andrew McConnell’s Gaza goes among the citizens of that trouble region and asks how families survive in a state of perpetual conflict.

Fans of Hollywood’s early 1970s high period will not want to miss An Evening with David Shire at the Light House. The composer of scores for such films as All the President’s Men, The Conversation and The Taking of Pelham 123 will be speaking with Aedín Gormley and performing songs and pieces on the piano. There’s something you don’t hear every day.

A few high profile releases should sell themselves, but we highlight them anyway. The lovely Stephen Merchant, alumnus of The Office and recently a busy supporting player in Hollywood, will be in Dublin for the Irish premiere of his directorial debut Fighting with My Family. Florence Pugh stars opposite Dwayne “The Rock” Johnson – playing himself – in a study of wrestler Saraya “Paige” Bevis.

Attendees will also get a chance to make up their own minds on one of the season’s most divisive films. On its premiere at Toronto, Brady Corbet’s Vox Lux – starring Natalie Portman as a traumatised pop star – was greeted with the odd raspberry and a few more declarations of “masterpiece”. We liked it very much and nod towards a first opportunity to hear Scott Walker’s score in the big screen.

Mention should be made of VMDIFF’s excellent season of Chinese films. Zhang Yimou’s Shadow sees that master unveil another of his martial arts extravaganzas. Expect as much beauty as violence. Zhangke Jia’s Ash is the Purest White, a satirical epic stretching across many years of Chinese life, marks an improvement on his fascinating, flawed Mountains May Depart. Zhao Tao is brilliant as a dancer flung into mayhem after brandishing a gun at the wrong time.

VMDIFF ends with an irresistible crowd-pleaser that will send punters bellowing happily into the (we trust) sun-soaked streets. Wild Rose features Jessie Buckley, Kerry’s finest, as a Glasgow girl who dreams of taking her country music to Nashville. Buckley is incandescent in the flick. That’s in-can-des-cent.

The Goop Lab: One episode is about the vulva. I’ll probably watch that with my parents
6