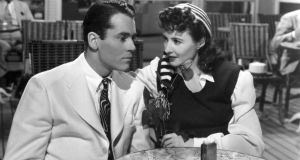 She’s got him wrapped around her finger: Henry Fonda and Barbara Stanwyck in The Lady Eve (1941)

THE LADY EVE ★★★★★
Directed by Preston Sturges. Starring Barbara Stanwyck, Henry Fonda, Charles Coburn. Club, IFI, Dublin, 94 min
Charles (Fonda), the bumbling heir to a brewery fortune, seems blissfully unaware of the many “dames” who flutter and fawn in his presence until he falls, literally – she sticks her foot out on purpose – for the streetwise Jean (Stanwyck). Charles – Hopsie to his friends – is just another mark for Jean and her smooth-talking father (Coburn). Until, of course, he becomes more than a mark. Hopsie gets wise just as Jean gets soft. Take two and Eve has reinvented herself as Lady Eve, a British aristocrat. She has revenge in mind: I need him, she says of Hopsie, “like the axe needs the turkey”. Flawless screwball comedy from 1941 ensues. TB

Strongly acted biopic of the late war correspondent Marie Colvin from the director of Cartel Land. Pike creates a person who is at least the equal – and usually the superior – of the men around her, but who also remains separate, singular, at an angle. She moves with an assurance that never gives in to swagger. A veteran of conflict zones, Heineman makes a busy chaos of the action sequences. Unfortunately the script, rife with cliches, isn’t worthy of the talent interpreting it. Full review/trailer DC

Happy Death Day 2U revisits and reworks the pleasing conceit of the original with mixed results. It starts promisingly, by kicking the Groundhog Day meets Scream mash-up that made the 2017 film so appealing into the lap of one the original film’s minor characters, Ryan (Vu), before switching back to the original heroine, Tree (Rothe). It’s clear that writer-director Landon (Paranormal Activity: The Marked Ones) wants to expand the universe; it’s just not clear that he should. TB

Jenkins’s wonderful follow-up to his Oscar-winning Moonlight adapts James Baldwin’s novel concerning a New York couple caught up in the malign jumble of legal evasions and societal dishonesties that worked to constrain African-Americans in the 1960s. Layne is the young pregnant woman fighting to stay aloft when her partner (James) is wrongly convicted of rape. The massed harmony of lighting, music and set dressing sets Beale Street apart. Both beautiful and angry. Full review/trailer DC

Charming, tender study of Shakespeare’s final days starring a big-nosed Branagh as the great man and Dench as his long-suffering wife. Written by Ben Elton, the film sits in odd relation to the author’s Shakespeare sitcom Upstart Crow. Branagh’s direction is not always subtle, but for the most part this is a balanced drama concerning the perils of unfettered contemplation in later life. As Shakespeare digs his garden, he fails to process accumulated regrets or push away ancient sorrows. Full review DC

McCarthy excels as boozy Lee Israel, the real-life biographer of Estée Lauder and Tallulah Bankhead, who, in the early 1990s, launched a second career as a forger of literary correspondence. Grant (like McCarthy, Oscar-nominated) is her even boozier, serially untrustworthy pal. The compactness of Can You Ever Forgive Me? has invited inevitable under-appreciation. It’s a great New York movie. It’s a great film about friendship. It’s also a great cat movie (if that’s your bag). Full review/trailer DC

Other ★★★★☆ and ★★★★★ movies out and about: Bohemian Rhapsody, Burning, The Camino Voyage, The Favourite, Free Solo, How to Train Your Dragon: The Hidden World, Spider-Man: Into the Spider-verse, Stan & Ollie

Dancing with the Stars: Love Islander Yewande Biala voted off as public save Fr Ray Kelly
8