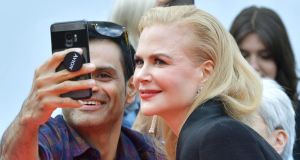 I can’t get away from Adam Driver. There he was at the Winter Garden screening of The Report. A few hours later he was back in the same theatre to remind us that he’s also chasing awards in Noah Baumbach’s Marriage Story. That’s how the opening weekend of Toronto International Film Festival works. If it’s not Adam Driver, it’s Jennifer Lopez staking a more unlikely Oscar claim for Hustlers.

The weekend closed with a film that – excuse the stereotyping – may be of particular interest to Irish Times readers. Four years after scaring up nominations for Brooklyn, John Crowley arrived here with the world premiere of The Goldfinch. The critics have not raved. Ansel Elgort, Nicole Kidman and Sarah Paulson star in an adaptation of Donna Tartt’s novel that reorganises the timeline without otherwise much altering the plot.

Marriage Story is close to Noah Baumbach’s best film – and, from the director of The Squid and the Whale and of Frances Ha, that’s saying something

Therein lie some of the film’s problems. Tartt was happy to admit that she leaned towards Dickens when writing, but, disordered and loaded with improbability, the book too often suggested that author’s earlier, less disciplined incarnation. The film is beautifully mounted, discreetly acted and desperately hard to get hold of. Peter Straughan, its scriptwriter, has worked hard at making a movie of the baggy plot, but he has not been sufficiently ruthless. Given the opportunity to ditch one ludicrous central plot swivel, he has merely rewired it without dragging it any closer to the realm of the possible. This is not the first Oscar-chasing adaptation to end up pretty, respectful and dull.

Crowley was not the only Irish film-maker unveiling new work this weekend. The experienced TV director Neasa Hardiman makes her theatrical debut with the maritime horror Sea Fever. The picture makes no secret of its influences. It begins in Jaws territory as a trawler heads into the Atlantic with a young biologist (Hermione Corfield) onboard. It goes a bit Alien when a luminous sea creature attaches itself. We head toward The Thing as crew gradually become altered. There is some very odd Irish accent work here – Lord knows what Capt Connie Nielson is up to – but the rest of the world will care little as the tension ups to satisfactory effect. It’s an effective film that won many positive notices.

You have some idea what to expect from a Pat Collins documentary – intellectual integrity played out at a studied pace – and he does not disappoint with the excellent Henry Glassie: Field Work. A study of the eponymous American folklorist, the picture begins in a manner that is leisurely for even the consistently unhurried Collins. We watch as a series of artists from various parts of the world construct beautiful items from wood, metal and paper. After 20 minutes or so Glassie, extravagantly moustachioed, turns up to lay out interesting theories about the importance of art in community. Raised on an American Civil War battlefield, with a talented carpenter for an uncle, Glassie proves endlessly wise on the presence of genius in all societies. He seeks to “understand people in terms of their excellence”. Quite right too.

Early favourite for the People’s Choice Award – a very reliable pointer to Oscar success – looks to be Rian Johnson’s Knives Out. Stuffed to the gills with stars, including Jamie Lee Curtis, Michael Shannon, Don Johnson and, as a New Orleans detective, Daniel Craig, the picture stands as a parody and a celebration of Agatha Christie. It’s funny. It’s silly. But it also has a sound mystery that’s worth trying to disentangle. The crowd howled at every credit.

Greed stars Steve Coogan as corrupt businessman in a slightly clunky satire of the super-rich. The targets have it coming, but Winterbottom carves with a shovel rather than a scalpel.

The Two Popes is a surprisingly funny study of the relationship between Pope Benedict and Pope Francis featuring unbeatable performances by Anthony Hopkins (as the German) and Jonathan Pryce (as the Argentinean). Hopkins maybe just wins the duel of the Welshmen as a man slightly embarrassed by his own fustiness.

Marriage Story is close to Baumbach’s best film – and, from the director of The Squid and the Whale and of Frances Ha, that’s saying something. Driver (him again) and Scarlett Johansson break hearts as a couple going through a painful divorce – and we can also celebrate another great performance from the Irish cinematographer Robbie Ryan, whose medium shots coolly convey the increasing distance between the two leads. Nominations for all. For all!