Review: Existential despair is the driving force in this promising outer space debut 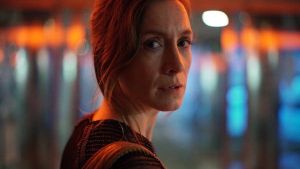 Mimaroben (Emelie Jonsson) works on the Aniara, a spaceship that takes passengers from the Earth, now ravaged by the climate crisis, to Mars. Her job involves operating the Mima, a machine designed to recreate viewers’ cherished memories as virtual reality. When the ship collides with debris, it is thrown off-course and left without fuel reserves. The Captain (Arvin Kananian) soon informs the passengers that they now have no control over their course and that a trip that ought to have taken three months may take up to two years. The cynical ship’s astronomer (Anneli Martini) tells Mimaroben, her roommate, that the Captain’s projections are fanciful.

Sure enough, three years later and the Mima has become the most valued aspect of life for occupants of the Aniara, but the horrors of Earth’s destruction overwhelms the machine, causing it to self-destruct.

Aniara has previously inspired a 1960 TV movie, a heavy metal album, and an opera

The second film adaptation of Nobel Prize-winning poet Harry Martinson’s 1956 cycle of 103 cantos – Aniara has previously inspired a 1960 TV movie, a heavy metal album, and an opera – feels like the Rapture translated into elegant science fiction.

The post-atomic and Cold War paranoia underpinning the source poem has given way to contemporary concerns for the environment and consumption. There are conscious nods to Tarkovsky’s equally cerebral sci-fi Solaris, but Aniara, the promising debut feature from writer-directors Pella Kågerman and Hugo Lilja, has its own unsettling, apocalyptic feel. Sophie Winqvist’s cinematography alternates between claustrophobic framing and the hopeless expanse of space. Alexander Berg’s eerie electronic score amplifies the existential despair.