It Chapter Two: What could possibly go wrong? Everything

Review: The sequel to the crowd-pleasing, $700-million grossing 2016 hit is a giant miss 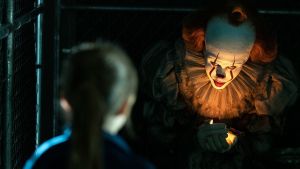 Pennywise the clown is reduced to a mere cameo

Where did all the fun go?

The sequel to the crowd-pleasing, $700-million grossing, fairground-scare-ground 2016 hit picks up 27 years after the first film, as the Losers’ Club – now essayed by grown-up stars including Jessica Chastain and James McEvoy – are summoned back to Derry to once again stand against the supernatural child-killer, Pennywise the Dancing Clown (Bill Skarsgård).

What could possibly go wrong?  Absolutely everything, as it happens.

By the time the Losers reassemble for an appallingly staged sequence in a Chinese restaurant – characterised by a lazy consumption montage and unscary monsters – It Chapter Two has already squandered any and all goodwill amassed by its predecessor.

The film somehow manages to keep going downhill from there as each of the Losers is sent off to confront their childhood demons, a therapeutic exercise that is rather undermined by the notion that said demons are an actual demon.

Along the way, they bicker like the adolescents we met in the first film, swear a lot, and keep running into ineffectually cartoonish creatures that might have been designed by a nine-year-old on a Skittle binge: and then its head falls off, and then it grows tentacles, and then the tentacles have hands, and then the hands have baby heads.

It Chapter Two generates an average of one fright per hour, not very much bang for your buck. Suspense is entirely eschewed in favour of embarrassing attempts at humour. Juice Newton’s Angel of the Morning strikes up as black goop oozes. Worst of all, Jack Nicholson is copied and pasted in for a “Here’s Johnny!” punchline as Jessica Chastain’s character cowers in a cubicle.

Between cusswords, the dialogue in Gary Dauberman’s script sounds like it was cribbed off a particularly pompous stack of inspirational posters, with lots of guff about promises and “the things we wish we could leave behind”.

Pennywise, meanwhile, is reduced to a mere cameo.

With all the film’s distracting awfulness, one shouldn’t have time to notice the brief appearance of a shrew wife or the plush townhouse that the gang stay in, with its free bar and no sign of a concierge, But here we are.

Don Delillo: ‘Conspiracies have always been on my mind’
9