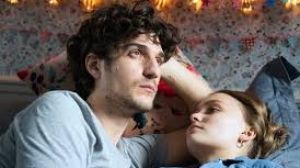 Louis Garrel and Lily-Rose Depp in A Faithful Man

The French actor Louis Garrel first came to international prominence as a possibly incestuous bisexual twin in Bernardo Bertolucci’s 2003 film The Dreamers, one point on a very complicated love triangle.

Following on from the similarly themed Two Friends (2015), A Faithful Man, Garrel’s second film as a director, also features a love triangle, although not  necessarily the one promised in the opening scene.

“Got a sec?” Marianne (Laetitia Casta, who is married to Garrel in real life) asks Abel (Garrel) as he is about to head out to work. She coolly informs him that she’s pregnant, that he’s not the father, that the father is a mutual friend, she’ll be marrying this mutual friend, and Abel needs to move out of their apartment before the wedding. Oh, quick mathematical calculation: the wedding is in 10 days.

Abel’s voiceover notes the brutality of these marching orders, but he nonchalantly walks out the door.

Years pass, and the mutual friend has died. A widowed Marianne is pursued by Abel, despite claims from her eight-year-old son Joseph (Joseph Engel) that she poisoned his father. The precocious kid seems to know his stuff: at a family outing to a screening of The Strange Love of Martha Ivers, he quickly identifies the killer.

Abel, meanwhile, is pursued by his late friend’s younger sister Eve (Lily-Rose Depp), who, echoing the film’s opening romantic dismissal, calmly tells Marianne to get out of her damned way.

This uneven but tremendously enjoyable film often feels like a series of MacGuffins, as it slyly shifts from fake murder mystery to romantic comedy to family melodrama. A clever script, co-written by Garrel and Jean-Claude Carrière, recalls the stylish shenanigans of L’Appartement, in its interplay of voiceover and shifting perspectives, skilfully put together by editor Joëlle Hache. Philippe Sarde’s romantic score and Irene Lubtchansky’s bright lensing add to the overall playfulness. Garrel is having fun with us, and the feeling is mutual.