Review: A Withnail and I-style study of a posh lush, but without the nostalgia 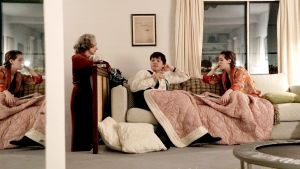 You won’t find two films more different in tone than Withnail and I and the latest strain of coiled unease from Joanna Hogg. Yet they are both drinking from the same stream.

Like Bruce Robinson’s comedy, The Souvenir sees a middle-aged filmmaker looking back at impoverished early experiences with a posh lush. The autobiographical element – to those aware of it – is an important balancing factor: we suspect escape will come at some point.

The earlier film is talky, autumnal and a tad at home to nostalgia. The Souvenir is so brittle that the slightest stress sends off dangerous sharp edges. The comparison is worth making as it points up the impressive disinterest with which Hogg goes about her work.

The film is moving, but it is entirely free of Robinson’s sentimentality. The director’s own past is pinned to the screen like a collected butterfly.

Honor Swinton Byrne (daughter of Tilda, about whom more in a mo) plays a comfortably off, naive film student called Julie. In between efforts to make an ill-advised social-realist project in Sunderland, she meets and falls for an upper-class bloke from the foreign office.

Anthony (Tom Burke), displaying the insouciance that passes for charm in Harrovian circles, initially seems like a catch, but hints of a dark secret eventually emerge.

Higher-browed English cinema rarely approaches the upper classes without winding out the satire (there’s a fair bit of that in Withnail), but Hogg makes only occasional digs at the characters’ unacknowledged privilege.

We may snort when, observing track-marks on Anthony’s arm, Julie accepts his vague explanation about some skin ailment. Not every kid was, however, alert to the signs of heroin addiction in 1980.

The sight of Tilda Swinton (see?) in headscarf and pearls as Julie’s mum alerts us to the possibility of an attack on Home Counties’ values, but the character, though socially conservative, proves to be the most compassionate in the picture.

“More money? Oh?” she says, more in surprise than irritation, when Julie, her boyfriend now a drain, admits to running short.

All of which is to confirm that The Souvenir does not often go to the places you expect. Shot in permanent shades of washed-out grey – with fairy lights for the occasional, mournful Christmas sequence – the picture sits back at a respectful distance from its queasy action.

The takes are long. The camera rarely deals in close-ups. Playing similar visual tricks to those she developed in Archipelago, Hogg arranges attractive tableaux on the other side of windows in increasingly joyless apartments. Life is elsewhere.

Burke knows to bury the addiction deep and to bury the despair deeper still. He may be a happening figure in the Civil Service, but he’s still green enough to jaw in half-baked fashion about the contemporaneous Republican hunger strikes.

By keeping his worst outrages off-screen, Hogg allows us some understanding of his continuing appeal to our protagonist.

At times, the film’s restraint borders on lack of generosity. A visit to Venice is briefer and less delicious than we deserve: a dark room and a darker conversation. The period detail never slips into jocularity.

We do get an excellent selection of contemporary tunes – Totally Wired by The Fall is particularly welcome – but, for the most part, we are stuck in an episode of I Don’t Love the ’80s.

It is, however, Hogg’s way to leave us in a state of tantalising incompletion. We collapse out of The Souvenir wanting more of everything. Which is just fine. A sequel will be with us next year.