Election 2020: 10 things you should ask your candidate but probably won’t

As funding for the arts continues to erode, here are the questions to ask on the doorstep 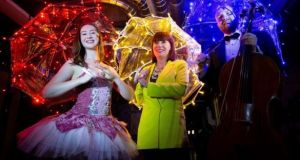 Minister for Culture Josepha Madigan launches this year’s Culture Night; the Arts Council is taking on responsibility for the event. Photograph: Tom Honan

From housing to health, Ireland’s next government has big issues to tackle, but the slow erosion of our arts and culture probably won’t be on their list. Arts workers and makers are schooled in almost masochistic levels of self-exploitation; something those at the top seem happy to continue to manipulate.

If the Government (and people) really cared as much about the arts and culture as they claim to do when someone Irish wins big on the international stage, here are 10 issues that would be live on the doorsteps.

1. Turn STEM into STEAM. Often considered a soft subject, art education teaches children to think laterally, look closely, understand their own creativity and value difference. Seems a no-brainer to make it core to the curriculum, alongside Science, Technology, Engineering and Maths, and even integral to how we teach other subjects in this fast-changing world, and yet we don’t seem to have cracked it yet.

2. Give the arts more money. Irish theatre companies have been enduring a long, slow death by 1,000 cuts. Cultural historians may well look back at the last decade and weep for what was lost, as young companies give up the ghost and older more established ones find the future near-impossible to contemplate.

3. Speaking of theatre, sort out the Abbey. The current drama kicked off just over a year ago, as 311 (rising to 427) theatre professionals signed a letter to the Minister for Culture protesting co-production practices at the theatre. Twelve months on, the dispute lingers, unresolved, with Minister for Culture Josepha Madigan saying it would not be appropriate for her to intervene in artistic matters. It’s our National Theatre, so where’s the national pride?

4. Fix NCAD. Buildings at the National College of Art and Design are leaking and damp, equipment is broken and not replaced. Staff are demoralised. On the other hand, maybe that’s just the training the next generation needs to understand the life of an artist?

5. Give the arts more money: and take a look at how it’s distributed. We have The Arts Council, Culture Ireland, Creative Ireland, Aosdána and the Local Authorities. We don’t want a monolith, but surely there’s room for reform.

6. Invest in rural networks. It’s a myth that our cities are the only creative hubs. Take a look at what’s really going on in rural Ireland and work out how best to celebrate and support it, rather than relying on colonising it with touring city projects.

7. Give the arts more money. While rural networks need supporting, our cities need love too. Private investment is not the answer, as we saw when plans to redevelop Parnell Square collapsed last summer, when projected philanthropy didn’t materialise. And yet from Poetry Ireland to the Olivier Cornet Gallery, the Hugh Lane to Hillsboro Fine Art, The Writers Museum, The Gate and more, all the ingredients are there.

8. Have a better strategy for preserving our heritage. You can’t hang on to everything, and new collections wouldn’t come in to being if old ones weren’t occasionally broken up. But when The OPW buys RTÉ’s Louis le Brocquy artworks, with the Arts Council getting a cut of the proceeds, it seems almost as nuts as imagining you’re saving money by getting pensioners to sign on to Jobseekers for two years before they can claim the real thing.

9. Get a decent strategy for Public Art. What is Public Art anyway? For some it’s a time-based project half way up a mountain, for others, it’s something large on a roundabout. Our roadsides are littered with the often-costly results of committee decisions, where vision is sacrificed for consensus, or bulldozed by clout. Agencies such as the UK’s Artangel, and London’s Fourth Plinth project offer a good model for how to push boundaries without losing the plot completely.

10. And did we say “Give the arts more money”? We’re way down the European league tables for per capita spending on the arts, although different measures can fudge the figures. There’s no point pretending to be a nation of culture lovers, if that love is merely a front for toxic exploitation.