Actor and comedian Terry Jones had died aged 77, Jones became famous for his roles in hit movies with Monty Python such as Life of Brian and The Holy Grail. 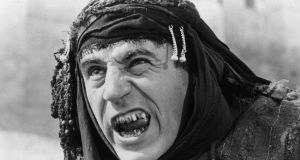 What The Beatles were to British music, Monty Python were to British comedy and it is no great stretch to view founding member Terry Jones, who has died aged 77, as the John Lennon figure in the comedy ensemble.

While most will remember the Welsh actor, comedian,director as the screaming harridan figure who cropped up regularly in Python sketches, or as the mother of the hapless Brian in the film Life of Brian who announced angrily that her son was not in fact the messiah, just “a very naughty boy”, Terry Jones was very much the comedic creative force in Monty Python.

It was his idea, early on, of abandoning the traditional punch line at the end of sketches and developing a more stream of consciousness, absurdist, approach to TV comedy.

Jones and the other five members of Monty Python – John Cleese, Michael Palin, Eric Idle, Graham Chapman and Terry Gilliam – irrevocably changed the course of TV comedy on the BBC show, Monty Python’s Flying Circus, which ran from 1969 to 1974 and is an acknowledged influence on performers such as Ricky Gervais, Eddie Izzard and Stephen Fry.

Comedians on US programmes such as Saturday Night Live, The Simpsons and South Park have all also spoken of their debt to the group’s groundbreaking work.

As important as Jones was as a performer and writer, he was the only Python member that all of the others trusted as a director when it came to graduating from the television to the cinema screen. Jones co-directed the Pythons’ first film, Monty Python and The Holy Grail, and then took sole directorial responsibility for the film they are still best remembered for – 1979’s Monty Python’s Life of Brian.

A sophisticated satire on organised religion and the ideas of credulity and hypocrisy, the film was controversial at the time of release and was banned in Ireland for a number of years. It is Jones’s directorial masterpiece and he took no end of satisfaction from the opposition to the film by many religious groupings saying once: “Life of Brian wasn’t about what Christ was saying but about the people who followed him – the ones who for the next 2,000 years would torture and kill each other because they couldn’t agree on what he was saying about peace and love.”

Originally from Wales, Jones began his comedy career while at Oxford University in the 1960s. He was part of a starburst of talent at the time; fellow students included his close Python collaborator, Michael Palin. Jones formed a successful writing partnership with Palin and when they met another student writing team from Cambridge University – John Cleese and Graham Chapman – Monty Python’s Flying Circus was born.

Although only a cult success when it was first transmitted on BBC2, the show tore up the unwritten constitution of what TV comedy could and could not do. Sketches such as The Spanish Inquisition and The Dead Parrot still have such a potent force that people can recite them verbatim to this day.

Jones’s last Python film as a director was 1983’s patchy affair, The Meaning of Life, where he is best remembered as the Mr Creosote character – the gourmand who explodes after accepting “just one more wafer-thin mint”.

To really understand the depth and range of his talent, you only have to consider the TV series he co-wrote with Michael Palin after the Pythons disbanded. Ripping Yarns was a TV comedy shown in the late 1970s which expertly and brilliantly satirised pre-second World War British culture. A neglected work, it contains some of his finest comedy.

When the Pythons pursued their other interests, Jones continued to direct films (very much his first love) and indulge in his passion for ancient and medieval history, writing a number of very well-received books.

In the 2000s he became known as a passionate and vociferous opponent of the Iraq war. He wrote fluently and with considerable knowledge about the geopolitical background of the turbulence experienced after the 9/11 attacks, and he collected all his newspaper articles on the subject in an informative and enlightening book called Terry Jones’s War on the War on Terror.

In 2016, he revealed he had a rare form of dementia (frontotemporal dementia) and in recent years had lost the ability to speak.

He becomes the second founding member of Monty Python to die after Graham Chapman’s death in the 1980s, which explains John Cleese’s very Pythonesque reaction to Jones’s death: “Two down, four to go”.

Cleese did add: “Of his many achievements, for me the greatest gift he gave us all was his direction of Life of Brian.”

His close friend and collaborator Michael Palin summed him up perfectly: “Terry Jones was far more than one of the funniest writer-performers of his generation. He was the complete Renaissance comedian.”