Donald Clarke: Chris Evans’ endeavour into US politics may prove to be just a hero’s folly 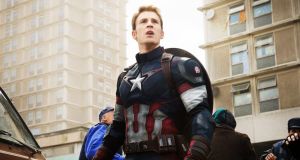 Red, white and blue: Not every sane contributor needs to be complemented by a lunatic. Captain America can avoid that trap.

I like the Chris Evans who plays Captain America. He’s my favourite famous Chris Evans. In interviews he has always seemed reasonable, amusing and morally sound.

To my knowledge, he has not hosted a single episode of Top Gear. Good for him.

His latest project sounds, in theory, like something worth pursuing. Last week, Evans sent a video to members of Congress announcing the imminent arrival of a “new civics engagement project” called A Starting Point.

“It’s a website designed to provide succinct answers to common questions by presenting both the Democratic and Republican point of view,” he said.

Modern discourse is so fractious that any choice by any news organisation is now going to drive many, many people bonkers

Presenting views from both sides of the aisle and allowing thoughtful observers to come to their own conclusion is a noble ambition.

It will almost certainly fail.

Evans may as well make for the current equivalent of Hanoi and, like Jane Fonda in an earlier era, chat with America’s enemies while straddling an anti-aircraft gun. This is the wrong way to make friends in 2019.

If he and his colleagues work hard then he may escape the current inclination towards false balance. You hear this when radio stations offer opponents of vaccination equal airtime to doctors advocating a public health policy that has saved millions.

This is akin to “balancing” a piece on round-the-world yachting with somebody who believes that if you sail too far westwards you’ll tip into a pit of hungry dragons.

Not every sane contributor needs to be complemented by a lunatic. Captain America can avoid that trap.

Evans may find it harder to structure his project around the current centre of US politics.

Never much at home to Maoism, the American polity has been dragged towards the authoritarian right by the election of Donald Trump and the subsequent acquiescence of too many establishment Republicans.

Positioning yourself between the “Democratic and Republican” point of view no longer means what it used to.

Locating gravitational equilibrium is made more difficult by the presence of black hole Trump-45 at the centre of the constellation.

The post-war consensus – less firm in the US than in the UK, but steady nonetheless – survived the Nixon thugocracy to burn up in Reagan’s bonfire of regulations.

Though Bernie Sanders put up a good fight, there has, in the succeeding years, been no convincing left-wing response from top-flight Democrats to compare with that by Michael Foot or Jeremy Corbyn (whatever you think of either).

As in physics, the political centre is positioned within an artificial frame of reference constructed by the observer.

Captain America and his team (I’m imagining Black Widow and Hawkeye passing him notes on yellow legal pad) are – if they stand by the press release – likely to position theirs several miles starboard of its likely position five years ago.

Even if Evans were to reach some kind of agreement on a neutral place to stand, there is no possibility of the surrounding world agreeing that subsequent content is disinterestedly commissioned.

One can reasonably argue that there is no such thing as impartiality. Human beings run the media. Human beings decide upon content. Any such decision is inherently political.

The late Jeremy Hardy, astute left-wing comic, argued that the fact that the left and the right now complained equally about the BBC did not confirm that the organisation was neutral; it merely confirmed that it was centrist (let’s not go back over the unreliability of that word).

Modern discourse is so fractious that any choice by any news organisation is now going to drive many, many people bonkers. I return again to the blackly hilarious response on Twitter to the BBC’s reporting of Martin McGuinness’s death in 2017.

There was close to a 50-50 division between users incandescent about pro-IRA coverage and those incensed about anti-Martin reporting.

“The BBC are making Martin McGuinness out to be some sort of hero,” Graeme yelled. A minute later Connor fumed: “It’s a f**ing joke how BBC news choose to portray Martin McGuinness by only showing the Troubles/IRA.” And so on.

The man who, last year, cornered me on the Galway train to demand that The Irish Times be prosecuted over its biased coverage of the Eighth Amendment campaign would – if he’d allowed me a word – have been surprised to hear that social media was fuming about the paper daring to publish the odd anti-repeal piece.

It may introduce false balance. It will certainly fail to find a sane centre.

If it somehow avoids both those traps millions will – after studying its Rorschach Ink Blot – conclude that it is hopelessly biased either to left or to right. Still, it’s a nice idea in theory.