Derry Girls’ blackboard scene is the TV moment of 2019 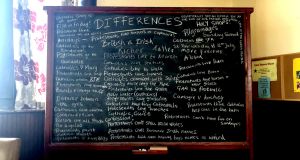 The blackboard from the opening episode of the second series of Derry Girls. Photograph: Dylan Llewellyn via Twitter

It’s time for the Derry Girls backlash. I’m here to wonder why this overrated show is getting such coverage in (wait for it, wait for it) The Paper of Record. The language! The bad manners!

Madonna once said she couldn’t love anybody who didn’t admire the paintings of Frida Kahlo. I feel the same way about curry, Alastair Sim and Lisa McGee’s sitcom.

The opening episode of the second series was excellent throughout, but one scene in particular managed the extraordinary feat of acquiring iconic status before the final credits had rolled.

Despite the show being set in the mid-1990s, the blackboard gag is startlingly of the moment

That’s the social-media age for you. The race for “TV moment of 2019” is already over. Heck, we’ll have polls summing up the decade in eight months. Place your bets.

I’m talking about that blackboard. The premiere episode sent our Catholic heroines on an outward bounds event with a group of Protestant boys from “Londonderry Academy”.

The weekend began with a priest bringing together the two groups for some light reconciliation. One student was given chalk and positioned before a board allocated for “similarities”. Another was in charge of “differences”.

By the end of the class, one board was blank and the other was crammed with suggestions. Even Derry Girls virgins will guess which was which.

“Fish on Friday!” was obvious enough. “Protestants love flutes,” was better. “Protestants keep toasters in cupboards,” caused me to laugh so hard I spat whiskey on the cat. (It would fit the narrative better if I were drinking Scotch – or Black Bush, at least – but this lapsed Protestant favours John Powers.)

The blackboard could not have had such immediate impact in any decade before the 2010s. It’s not just that we wouldn’t have had the means of sharing our appreciation. The gag is designed for an era in which most viewers can freeze the image and analyse all corners. If this had happened in 1989 only those who’d taped the broadcast would have had an opportunity to agree or disagree that: “Catholics love bingo”.

If the episode had emerged in 1975 you’d have had to wait for the repeat to learn if somebody had really claimed that: “Protestants love accordion bands + orange stuff”. Despite the show being set in the mid-1990s, the blackboard gag is startlingly of the moment.

McGee has selected her slurs and generalisations brilliantly. They cross the spectrum from genuine prejudice to harmless misconception.

We don’t know which team argued that: “Protestants think Catholics keep coal in the bath.” The suggestion was either a manifestation of bigotry or a complaint about such bigotry.

“Protestants think Catholics are all alcos,” does the same work.

There is some genuine theological confusion.

It looks as if the recording student had written “Protestants say an extra bit at the end of ‘our father’,” and then – after hearing a follow-up suggestion – squeezed “also call it the Lord’s Prayer” vertically down the last strip of empty space.

You probably need to be from Ulster to appreciate: “Catholics go to Bundoran. Protestants go to Newcastle.” (The latter is the home of Royal County Down Golf Club.) Most Irish people will, however, catch the subversive magnificence of “Protestants love soup”.

Freud’s narcissism of small differences, without which the blackboard would be blank, may well persuade some Catholics that their Protestant neighbours enjoy hearty broths before a stout mid-summer march, but the sentence also gets at the still-notorious history of bribed conversions during the Famine.

It is surely no coincidence that McGee and her team have placed their masterpiece at the top centre of the now-famous blackboard. “Protestants keep toasters in cupboards.”

My mother is as clean and organised a housekeeper as you could hope to meet, but her toaster has always remained easily accessible on the kitchen worktop. My friend Bronagh, who is from Newry, tells me, however, that: “I have checked with Protestants – the toaster thing is real.”

Is it? The joke works because it feels right. It gets at some prevalent stereotype we can’t put our finger on. Something about Protestants being obsessed with tidying?

Like most everything else in Derry Girls, the blackboard hints at a malignity that is forever looming just outside the busy frame.

The urge to exaggerate tiny social distinctions between our neighbours and ourselves is one of our species’ most regrettable traits. It still leads to much misery on this island. It also generates much spiky humour. There is scarcely a Northern Irish person standing – whether full-on bigot or enlightened egalitarian – who has not smiled at some supposed defining trait of either “community”.

Derry Girls has refined those million jokes on to a single durable image. Please, please tell me the production team kept the blackboard. If so it will be in the Ulster Museum before the coming decade is out.