Donald Clarke: Woodstock 50 line-up criticism has left you sounding like your parents 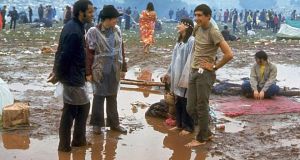 Young people standing in the mud and water and talking, during Woodstock in August, 1969. Photograph: John Dominis/The LIFE Picture Collection/Getty

Anybody keen on celebrating the 50th anniversary of Woodstock deserves whatever comes their way.

Fighting dysentery to the strains of the Paul Butterfield Blues Band was never my bag (man), but, if you want to mark the event, knock yourself out.

We’ll throw in a side order of trench foot.

The acts have been announced for the inevitable Woodstock 50 festival in August and people are upset. If you were hoping for original headliners such as Bert Sommer, Quill or the Keef Hartley Band then you will be disappointed.

There’s more to the anniversary event than the grand old men of older-brother rock.

“Anyone who loves music and loves love would enjoy this,” Common (47) said at the press conference.

Jay-Z, The Black Keys and Janelle Monae will be there. Yay! I like them.

The blue-veined yelling in the aftermath confirmed that Woodstock helped create an establishment more reactionary than any suburban golf club. It was everywhere, but a glance at the comments section in Variety will suffice.

“This Woodstock is mostly comprised of people who can’t sing or play an instrument . . . ROFL,” Drew told us (presumably from the floor).

“This lineup is a joke by comparison to the legends who took the stage and made history,” Este8888 agreed. Elsewhere, to the accompaniment of a dog-whistle, others objected to the inclusion of rap in a concert that was supposed to be celebrating rock and folk.

Will these people ever go away?

When their parents screwed up their eyes and – appalled by T Rex or David Bowie – wondered whether “that was a man or a woman” they were, at least, under no illusion that they were keeping a revolutionary spirit alive.

Within minutes of first hearing Exile on Main Street, The Rock Bores confirmed their status as the sort of insurrectionists who, once the oppressors had been defeated, brought in laws more puritanical than anything the dead Generals imagined.

During the height of the Disco Sucks campaign, they blew up records at a baseball field in Chicago.

The old refrain of “they can’t play their instruments” was bellowed during the punk years.

The reactionary tendency really set in with hip-hop. Many are the Bores who believe that rap is a brief passing phase that appears to have lasted decades only because of a temporal anomaly that allowed 1979 to happen 40 years before 2019.

You’ll find something about it in Stephen Hawking’s A Brief History of Time.

None of this is to suggest that Woodstock 50 is worth tolerating. The various attempts to revisit the event have been as unintentionally hilarious as the activities of military re-enactment societies.

The 25th anniversary event in 1994 was dogged by baby versions of the ticketing catastrophes from 1969, but the main stage could boast nobody more invigorating than Del Amitri or Sheryl Crow.

Woodstock 99 was characterised by a near-riot during a set by the ill-remembered nu-metal band Limp Bizkit. “Wouldn’t happen in my day,” the Rock Bores mused from the comfort of their bath chairs.

All this is to no sensible end.

Edited in part by Martin Scorsese and Thelma Schoonmaker, Michael Wadleigh’s Woodstock is a vital piece of documentary filmmaking.

The movie’s significance springs from its ability to convey the wretchedness of the festival without the viewer having to actually be there (you get much the same effect from Peter Jackson’s recent film on the first World War.)

Few decisions in Schoonmaker and Scorsese’s long career were quite so welcome as the choice to leave out the Grateful Dead, but there is some characteristically gruesome footage of John Sebastian and Ten Years After.

Yes, yes, yes. There are excellent performances by The Who and Jimi Hendrix, but both seem at odds with the stoned, drenched atmosphere that surrounds them.

It looks like the death knell of an exhausted era.

But it wasn’t quite that. It is now often forgotten that almost everybody felt this culture to be ephemeral. Few reckoned that they were witnessing the cementing of a cultural institution.

Last week, Roger Daltrey mouthed off in favour of Brexit as The Who announced yet another tour.

At least two generations of imitators (you know who they are) have followed. That’s the thing no Woodstock revival can capture: the suspicion that the supposedly revolutionary musical movement was about to go the way of Dixieland jazz.

Oh well. There is some good news.

Woodstock 50 is, at least, among the last golden jubilee celebrations for the decade that won’t shut up about itself. It will soon be a lot quieter round here.

The 1970s were mostly ghastly.