Donald Clarke: A new print of A Clockwork Orange is on the way – get your boots on 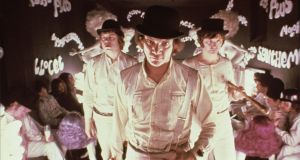 There are no sacred cows. Once something gains such status it has begun to atrophy. You may as well sling it in a gallery and put a red rope around it.

Such thoughts were triggered by the extraordinary furore that greeted an article on the US pop culture website, Jezebel, suggesting Alanis Morissette’s Jagged Little Pill might be “actually very bad”. Was this really such an unexpected opinion? People have been saying that for ages and ages. Haven’t they?

I remember the resistance to that record being built around retaliatory support for the near-contemporaneous Live Through This by Hole. That was the less bourgeois feminist text. You see? Its very existence constituted a two-fingers to the rock bros who were already framing Courtney Love as Yoko Ono to Kurt Cobain’s John Lennon (a badge of honour if ever there was one). You follow? Allow me to explain feminism further to you. Allow me to press this copy of David Foster Wallace’s Infinite Jest – another key mid-1990s text – into your hands as I spill beer down your unwilling front.

All this links together. A glance at the article suggests the author, originally a fan of the record, was belatedly giving in to her husband, no Morrisette supporter, who was responsible for bringing Fleetwood Mac albums into the house.

There was a sense that even this last outrage was now seen as a good thing. On reflection, the fury was entirely justified.

“There is nothing more shaming than to be loved by teenage girls,” journalist and author Caitlin Moran once wrote with a heavy dollop of irony. “The love of teenage girls is not merely substandard, or worthless – it is an active mortification to an artist.”

You see this in the disproportionate hatred of Twilight, the movie based on the novel by Stephenie Meyer. A cadre of halfwits still follows Kristen Stewart – the only American woman to win a César Award – about the virtual globe, castigating her for appearing in a project that once appealed to females under the age of 20.

So, yes. Maybe the offended were on to something.

It is, nonetheless, a good thing to pull out the golden calves and kick them about the street for a spell. Don’t fret if somebody argues that the Beatles’ White Album largely comprises tuneless indulgences thumped out begrudgingly by a drugged-up band who could barely stand the sight of one another. If somebody (I can’t imagine who) were to say this, you would still be allowed to sing along to the irresistible strains of Wild Honey Pie or Savoy Truffle.

At about the same time as people were arguing over Hole and Morissette, Robert McKee, the eternal screenwriting guru, made a television programme explaining why Citizen Kane wasn’t very good. Orson Welles’s first film continued to top critics’ polls for decades to come. Ulysses had scarcely secured its reputation before Virginia Woolf was declaring it “the book of a self-taught working man, and we all know how distressing they are”. Woolfy and the Joycer still share space in bookshops.

There is no more revered figure in post-war American cinema than Stanley Kubrick. The late director has gained a particularly robust reputation among the sort of young man who relaxes by compiling lists on the internet. That monumental perfection appeals to such brains. It’s more easily scored out of 10 than the chaos of early Jean-Luc Godard or the madness of high-period Werner Herzog. Those fans will get a chance to genuflect one more time when a new print of A Clockwork Orange goes before punters next week.

The legend is familiar. Released in 1971, the adaptation of Anthony Burgess’s dystopian novel was withdrawn by its director two years later following suggestions that violent criminals had drawn inspiration from its content. That didn’t stop it inspiring David Bowie’s lyrics, Heaven 17’s name, a Blur video and countless other legacies.

It is often forgotten that the homage is invariably to scenes and images from the opening third of the film. A Clockwork Orange begins with a brilliant variation on 1970s decadence – all noisy hair and glam lines – that points to anticipated outrages in a totalitarian future. The Korova Milk Bar. The Droogs. The Thamesmead brutalism. When Alex gets caught, however, the film slopes into agit prop that could scarcely be any broader if it were performed by drunk undergraduates. Ronnie Barker’s TV comedy Porridge offered more biting penal satire at much more economic length. Much of A Clockwork Orange is very bad. Watch Barry Lyndon instead. Almost all of it is very good.

None of this will harm the reputation of Kubrick’s most controversial film. Indeed, such demolitions invariably inspire robust defences that help renew the work for hitherto jaded eyes. Something like that happened with Jagged Little Pill this week. There are still reasons to snort at it. But the kickback confirmed its importance with often-ridiculed corners of society.

It’s still no Live Through This, mind you.

Pizza Girl: A sharp shock of a novel
7