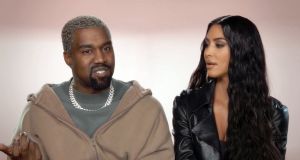 Konfessional mode: Kanye and Kim in the new series of Keeping Up with the Kardashians. Photograph: E!

After a long season that became a self-referential commentary about what it means to be a Kardashian, this season (in a bid to stem any growing fatigue) they’ve unleashed the big guns, as the show unveils Kanye (West) Kardashian, ready for his close-up.

The star has been an elusive figure throughout the show appearing on the fringes, silently brooding or beatifically smiling like a benign God blessing the family with his presence, but now has finally agreed to be part of the show’s talking-head segments alongside his wife.

Thrusting Kanye into the spotlight in such an obvious way feels like Kim’s last-ditch attempt to rehabilitate her husband’s image, which has suffered from his freewheeling, desperately uninformed political hot takes. Mired in his MAGA hat, he has become a figure of ridicule rather than the Instagram version of John and Yoko that Kim had hoped for. By giving him a platform where he can be ruthlessly edited, the shows producers have created another Kanye, a pleasant televisual version.

Within the show, especially in the interview sections, he comes across as the more human of the couple, emitting a relatable warmth against Kim’s blank coldness. He gently chides her for saying that their son Saint is her “favourite human at the moment”, shaking his head when she tries to explain that her family plays favourites with billionaire Kylie being Kris Jenner’s current golden child. He playfully compares their family to The Incredibles, where “the wife has a big butt” while Kim looks on half embarrassed.

This episode is Keeping up with Kanye, celebrating the news that the Kardashian-West’s are expecting their fourth child, a son, through a surrogate, and following them on a trip to West’s hometown of Chicago.

The episode’s main storyline looks at his work helping to rebuild the Avalon Theatre where he once supported Jay-Z. This is Kanye going back to his roots and an ideal opportunity for Kim to address their side of the Donda House controversy – an argument that stemmed from Kanye’s longtime friend and collaborator Rhymefest tweeting about how the rapper has had little or no input into the charity that bears his mother’s name.

The Kardashians (especially Kim) refuse to follow the old showbiz maxim of never complain, never explain. Theirs is the language of oversharing, so true to form, she escalated the issue by retaliating via Twitter, creating more press about Kanye’s “troubled” state.

Kim has a tendency to position herself as Kanye’s protector/defender/translator, attempting to do damage limitation whilst her husband bounds towards the next controversy like a hyperactive toddler.

She sees her involvement in Kanye’s ever-growing list of calamities as her wifely duties, but in this episode she complains to her mother that she can no longer be his babysitter, aligning him with creative geniuses such as Brian Wilson who cannot deal with the real world.

As with most of their Twitter “beefs”, any genuine sentiment the family has gets lost in their craven need to control the headlines. But after a decade of creating content, the public may be growing tired of their transparent tactics and the stuck in petty teen-mode.

Eventually, Kim summons Rhymefest to their mausoleum-style home asking that he conducts any further business in private, talking as if her husband isn’t in the room. But he’s there sitting on the couch waiting patiently for his wife to resolve his messy business.

Nothing is solved, Rhymefest produces some crystals and bangs on about healing, with the couple accepting his magic beans as Kanye chatters about love and family. Family may be everything to the Kardashians but the pressure is now on Kim to keep their empire intact as her childlike-husband appears intent on its destruction.