Yes, the Gaeltacht is in a bad way, but don’t panic yet 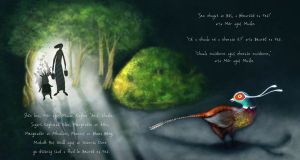 A page from Mór agus Muilc, illustrated by Kim Sharkey

When he died, aged 89, my uncle was still John Óg, Young John. Born in 1918 to an unmarried mother, there had been another John – his own uncle, John Mór, Big John – in the house where he was reared, and the older man living into the 1970s, there remained a need to distinguish between the two and so the name stuck.

And it suited him, for until near the end, he was young in spirit, curious about the world around him, particularly politics, and he had a mischievous sense of humour. One would almost pity the would-be politician that called to the house without having his or her homework done. John Óg would have all the details of the last budget, any broken promises and the party’s manifesto memorised and, sitting by the range, he would cross-examine the upstart.

Like most of his generation in Gaoth Dobhair, John Óg spent his late teens and 20s going over and back to Scotland, tattie-hoking (harvesting potatoes) and singling (harvesting turnips). He was well-regarded by the farmers of the Scottish borders and while others returned home after the harvest, he sometimes stayed in Scotland through the winter, tending to the animals. He was there in the atrocious winter of 1946-47. Indeed, it may have been that winter that he rescued a young rat from a tin can and the rat, with John Óg feeding it, hung around the bothy until the spring and kept him company.

Rural electrification and water schemes brought John Óg home for good in the early 1950s. A hard worker, he was in great demand for connecting pipes and cables – no easy task with holes to be chiselled with a hammer through stone walls that were two-feet thick. Then, in 1963 his friend Seán Jimí opened a bar and lounge, and John Óg began a new career serving bottles of Smithwicks and Guinness and leath-chinn uisce beatha, halves of whiskey.

The beár beag, the wee bar, was a male preserve. Here, neighbours would gather in the evening to get the news, forecast the weather and tell tall tales of their days thall údaí or “over-by”. John Óg would lead the discussion, prod, cajole, encourage, and incite and then, occasionally, eject the obstreperous or offensive. No row lasted too long. Everyone understood their role and the ejected, after a brief exile in Tigh Néill in Doire Beaga or the Foreland Heights in Cnoc Fola, would soon return to play their part in the little dramas of the beár beag.

If John Óg was more than sociable, he didn’t attend chapel too often. He had a special dispensation from the parish priest, he told us. And he never married. “I like the quiet life,” he used to say. In fact, his quiet life had ended in the early 1970s when my parents and the seven of us (soon to be joined by another two) moved in with him. Still, he never complained and every evening he would regale us with songs and stories before heading out to the refuge of Tigh Sheáin.

Mór agus Muilc includes a gentle satire of the better-off

There is something special about growing up around an older person. The Scottish villages of Lauder, Kelso and Chaple Mains became familiar to us. John Óg had a great memory for names and details and he brought alive the world of the tattie-hokers and the navvies with stories of Horse McBride, Tiger Friel, Paddy the Donkey, the Coinín and “various other animals”.

We learned other things too-rhymes and riddles, local history and “Latin”. In fir tar is; in oak none is; in mud eel is; in clay none is, he used to intone with all the solemnity of the parish priest.

Among his favourite rhymes was Mór agus Muilc. It tells of a woman, Mór, and a man, Muilc, who go down to the beach to collect limpets. Turning a stone, they find a crab, which they think is Death, and they run away in terror. Meeting a character called Eoghan an Chailc, Eoghan of the Chalk, who we imagined a schoolteacher, they shout, “Seo chugat an Bás!” Death is coming.

“Who saw it or says it?” he asks. “We saw it and say it!” they answer. And off he goes with them, all three now running in panic, collecting a series of fantastically named characters as they flee Death: Sagart Eoghanaí Glic, Cute Owenie’s Priest; Meagadán an Átha, the Blatherer at the Ford; Meagadán an Mhuilinn, the Blatherer at the Mill; Pioncas an Bhun Bhig, the Bunbeg Pin Cushion; Madadh Ros Goill, the Rosguill Dog; Bearád na Feá, Pheasant Hat; and An Goirria Donn, the Brown Hare.

The stampede only ends when the motley crew clambers onto a white horse, An Gearrán Bán, to cross the channel from Gaoth Dobhair to Na Rossa. There, a flood sweeps them away, drowning the lot. And with that, John Óg, with a twinkle, would explain to the wide-eyed children gathered around him, that there was no escaping Death. Yes, child-rearing was different in the 1970s.

John Óg could not remember when he first heard Mór agus Muilc. Certainly, it is old: in the 1930s, old people around Gaoth Dobhair told versions of it to school children collecting yarns for the Irish Folklore Commission.

It includes a gentle satire of the better-off; the teacher, the priest, the miller and the man with the fancy hat. And while John Óg cheerfully tried to get kids to ponder the inevitability of death, it was probably intended as a cautionary tale, a warning not to panic, a Gaeltacht equivalent of “Keep Calm and Carry On”, or, better still, a reminder to always establish the facts before acting.

That advice remains useful to those of us concerned with the condition of the Gaeltacht: yes, things are bad, but panic is not going to get us anywhere.

In truth, there are grounds for optimism. It is now twelve years since the National University of Ireland, Galway produced A Comprehensive Linguistic Study on the Use of Irish in the Gaeltacht (2007), that documented the rapid decline of Irish in even the strongest Irish-speaking areas and made clear proposals for reversing that trend.

To its credit, the Oireachtas responded imaginatively, producing the cross-party Twenty-Year Strategy for the Irish Language (2010), and then, in 2012, carrying the Gaeltacht Act, which committed resources to foster the language in 26 newly-defined areas. Údarás na Gaeltachta will have language planning officers in each of those areas by the end of 2020.

It remains to be seen if Irish will long remain the primary language of the present-day Gaeltacht. But surely it is better that we acknowledge the reality of the situation and respond accordingly, than rush off, like Mór and Muilc, proclaiming that Death is coming?

Mór agus Muilc, illustrated by Kim Sharkey, is published by Éabhlóid. It is available from bookshops and from www.eabhloid.com Price: €12