A sneak preview of this Saturday’s books pages 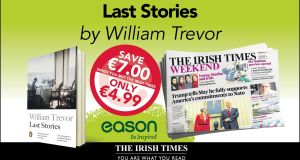 This weekend’s Eason book offer when you purchase a copy of The Irish Times is €7 off the cover price of Last Stories by William Trevor, now just €4.99.

Travelling in a Strange Land by David Park has won the €15,000 Kerry Group Irish Novel of the Year at the 49th Listowel Writers’ Week, while the €10,000 Pigott Poetry Prize was awarded to Ailbhe Darcy for her collection, Insistence.

It’s a bumper book edition of The Irish Times this Saturday – what readers of a certain vintage might describe as a summer special – leading off with Anna Carey’s cut-out-ad-turn-into-a-sunhat summer reads recommendations. Despite its rich literary tradition, Ireland has produced very few science fiction writers. A new generation of novelists is changing that, writes Julian Gough to mark the paperback publication of Connect, his own foray into the field. Caleb Richardson, author of Smyllie’s Ireland: Protestants, Independence, and the Man Who Ran the Irish Times, considers the importance of one of Ireland’s greatest editors. In the Magazine, Sorcha Pollak talks to Christy Lefteri about The Beekeeper of Aleppo and Amy O’Connor interviews Tan France about his memoir.

Our reviews include Martina Evans on Elsewhere by Rosita Boland; Joanne Hayden on Salt Slow by Julia Armfield; Keith Duggan on In Sunshine or in Shadow by Donald McRae; John Self on Ordinary People by Diana Evans; Tony Clayton-Lea on the best new music books; Margaret Ward on Outrages by Naomi Wolf; Carl O’Brien on Some Kids I Taught and What They Taught Me by Kate Clanchy; Paschal Donohoe on The Third Pillar: The Revival of Community in a Polarized World by Raghuram Rajan; Sarah Gilmartin on She Would be King by Wayetu Moore; and Martina Evans on new poetry collections by Pat Boran, Mya Roddy and Anne Casey.