Rees-Mogg’s terrible reviews are a cause for celebration 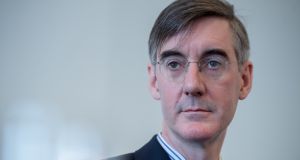 Let’s hope that Jacob Rees-Mogg is keeping his chin – such as it is – up after last week’s critical reaction to his new book. The archest of arch-Brexiteers was commissioned three years ago to write The Victorians: Twelve Titans Who Forged Britain, for a publication date timed to coincide with the bicentenary of the eponymous empress’s birth this year. He reportedly spent 300 hours on the assignment, which, at 25 hours per titan, seems a little on the light side for such a weighty subject. But, as we all know by now, Rees-Mogg is not a man crippled by a sense of his own limitations.

Reviewers, however, have not been kind. Historian AN Wilson, whose own The Victorians was published in 2002, wrote in the London Times that Rees-Mogg’s effort was “anathema to anyone with an ounce of historical, or simply common, sense”, and described the 12 profiles as “a dozen clumsily written pompous schoolboy compositions”. He went on to describe the author as “worse than a twit” and the book as “morally repellent”.

Dominic Sandbrook in the Sunday Times agreed. “There have been many books on the Victorians, but surely none so badly written,” he wrote.

In the Guardian, Kathryn Hughes described The Victorians as “an origin myth for Rees-Mogg’s particular right-wing vision of Britain”.

“In parliament, Rees-Mogg is often referred to as ‘the honourable member for the 18th century. What a shame, then, that he has not absorbed any of the intellectual and creative elegance that flourished during that period.”

Over in the Observer, Kim Wagner, a senior lecturer in British imperial history at Queen Mary University of London, joined in the general mauling. “The book really belongs in the celebrity autobiography section of the bookstore. At best, it can be seen as a curious artefact of the kind of sentimental jingoism and empire-nostalgia currently afflicting our country.”

Who, apart from the Honourable Member for North East Somerset himself, could fail to enjoy this barrage of abuse and contempt?

In our modern age of safe spaces, sensitivity training and, you know, fairness, the critical pile-on is, sadly, increasingly rare.

Those of us who dabble in reviewing are occasionally called to atone for our sins at doleful seminars on “the role of the critic”, where there is talk of eunuchs in harems and dogs’ relationships to lampposts, while a considerable amount of hot air is generated about the reviewer’s duty to be fair and measured.

All humbug . There are few things more entertaining than an out-and-out critical flaying as long as some basic ground rules have been observed.

Kicking down, for example, disqualifies immediately. First-timers or struggling marginalists who produce terrible work need to be handled with patience and tact (or, even better, let slip past unmolested and unreviewed). Ideally, the author/artist should enjoy the highest stature in their profession, and be blessed with an even higher level of self-esteem. Pomposity is highly valued. And, yes, the work under consideration should be unspeakably awful.

Congratulations to Rees-Mogg for meeting all these criteria so splendidly. His defenders may contend that much of the venom is politically driven (although what’s wrong with that?), or that it’s all just a case of professional historians ganging up on a gifted amateur (shades of the stormy interchanges here over the years between Tim Pat Coogan and Diarmaid Ferriter ).

But Wilson, to be fair, did express some regret that this was the review he had to deliver.

“No doubt every sanctimonious academic in the country has already decided that Rees-Mogg’s book has to be dreadful, so it would have been fun to disappoint them,” he wrote. “But there is just no denying it: the book is terrible, so bad, so boring, so mind-bogglingly banal that if it had been written by anybody else it would never have been published.”

This is good stuff; when writing a real stinker of a review there must be no holding back. Once the defamation laws are not breached, every insult and rhetorical flourish should be deployed. At least, that’s usually the case. In this particular instance, though, we may have found one exception

“Before I started the prospect of Rees-Mogg in Downing Street struck me as a ridiculous idea,” Sandbrook wrote in his Sunday Times review. “But if this is what it takes to stop him writing another book, then I think we should seriously consider paying the price.”