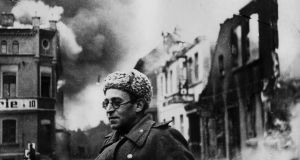 In 1932, Vasily Grossman’s first novel was refused publication for its “counterrevolutionary tendencies”. The young author wrote to Maxim Gorky to enlist his support:

“I wrote what I saw while working for three years [in the mines]. I wrote the truth. [. . .] I fail to understand what’s counterrevolutionary about my book – is it that there’s drinking in the Donbass, that there are frequent brawls there, that work in a coalmine is very hard or that people, coalminers . . . don’t smile 24 hours a day?”

Gorky replied that Grossman’s simplistic “naturalism” depicted “the truth of the past, [. . .] a very bad and tormenting truth”.

Soviet truth was aspirational. The writer’s role was to usher in the Marxist-Leninist utopia. That was also the year the Union of Soviet Writers was established and the term “socialist realism” coined to describe the compulsory house style. Grossman took the hint. He rewrote his first novel and got it published.

In the 1940s Grossman, now famous, was appointed to give The Great Patriotic War the Tolstoyan treatment. The result was Stalingrad, now appearing in its first English translation.

The novel has been reconstituted at great labour by editors Robert Chandler and Yuri Bit-Yunan, as no definitive Russian edition exists. The 1952 publication, just before Joseph Stalin’s death, was followed by editions in 1954 and 1956. Each edition is significantly different to the others, and different again to 11 typescripts in the Russian state’s literary archive in Moscow. The third typescript seems closest to what Grossman wanted to publish, before successive rounds of editorial revisions. The notes to this translated edition allow us see which version, or versions, each chapter was based on, and it is plain to see how much fine material had been excised for ideological reasons.

One scene even seems to reprise Grossman’s youthful exchange with Gorky; Marusya chides her sister, Zhenya, for not appreciating that collective labour is “a source of constant moral uplift. The workers make jokes, their confidence never flags.” She recounts the moment a new gun was wheeled out of the workshop: “I felt such love of my country that I could have gone on working [. . .] for another six days.” Zhenya counters that such language rings false – it turns people into figures on posters. Marusya retorts that there are two truths: “There is the truth of the reality forced on us by the accursed past. And there’s the truth of the reality which will defeat the past.”

Stalingrad is stylistically and intellectually dissonant, as though these sparring sisters had penned it together. The exchange quoted above reads like Grossman’s apology for his compromises on the page.

When the editors demanded proletarian heroism, Grossman produced chapters set in a coal mine, where a model worker feels a transcendent sense of fellowship with his co-workers for exceeding their production quotas. The action here is finely observed and paced and imposes itself, as all skilful fiction does, as a vision of reality. Yet Grossman – who nearly died after his three years down such mines – had privately written of workers “shackled” by quotas and obligations: “I’m convinced you wouldn’t find even 10 workers in 40,000 or 50,000 going to work at 6am willingly and freely.”

The war in the east was a tale of brutality on both sides. The frantic Soviet retreat had much to do with unwillingness to resist. More than three million Soviet soldiers were captured in the first year of the war. After a decade of famine and forced collectivisation, many civilians welcomed the Germans. Battalions of Soviet citizens fought alongside the Germans. At Stalingrad, Stalin’s decree of “Not One Step Back” was enforced by the NKVD, which formed a second line behind the front to shoot those who retreated. About 13,500 men were officially shot for cowardice. The unofficial numbers can only be guessed. The slave-labourers of the Gulag were put in uniform and sent to their deaths by the hundreds of thousands. These “punishment battalions” were known as smertniki – the walking dead.

There are fine descriptions in Stalingrad of combat, of the carpet-bombing of the inhabited city, of the evacuation of civilians across the Volga under fire and of the counterattack to defend the city. The great writing alternates with passages of bombast and didacticism. Grossman does not capture the brutality inflicted on Soviet soldiers, or the brutality of which they were capable. His censors even struck references to petty thievery, swearing, rotten food, bedbugs – at one stage they removed mention of unwashed hands. Even moments of humour or farce were slashed for undermining the heroic tone.

Yet Grossman struggled with ingenuity and tenacity for the partial truth Stalingrad contains. He pushed boundaries at great personal risk, and was sometimes successful. There is much in Stalingrad that is categorically not the official line. Grossman wished for those who had perished anonymously to be remembered, and he emphasises the bravery and suffering of ordinary people rather than strategic genius of their supreme leader. He also wished his novel to speak to the ordinary soldier who had fought and survived. There are passages on Nazism, including Hitler’s contempt for the lives of his soldiers, which are coded attacks on Stalinism. Punishment battalions and the existence of dissatisfaction with the regime are referenced. There are allusions to taboo subjects such as the Holocaust. One of the main characters is recognisably Jewish, at a time when Jews were being purged from Soviet public life and executed.

Stalingrad was being publicly denounced soon after it appeared. Grossman would probably have ended up shot had Stalin not died only months later.

Stalingrad is a magnificent but mutilated achievement. Any simple response to it is bound to be wrong. Anything that can be asserted about it needs to be contradicted. As soon as it is examined as a narrative, we are forced to delve into the story of its tortured composition.

Grossman’s later novel Life and Fate would pick up chronologically where Stalingrad left off and features many of the same characters. Superficially, Life and Fate is Stalingrad’s sequel. On a deeper level, the later novel is a rewriting of Stalingrad without regard for the censor, revisiting the same landscape but with the vocation for truth that Grossman had expressed years before when he wrote his account of the Treblinka extermination camp:

“It is infinitely painful to read this. The reader must believe me when I say that it is equally hard to write it. [. . .] It is the writer’s duty to tell the terrible truth, and it is the reader’s civic duty to learn this truth. To turn away, to close one’s eyes and walk past is to insult the memory of those who perished.”

Philip Ó Ceallaigh is a Bucharest-based author and translator