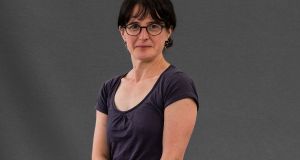 Author Sarah Moss: ‘I began to write Ghost Wall in the aftermath of the Brexit referendum.’ Photograph: Massimiliano Donati/Awakening/Getty Images

You can’t write in English about bog bodies without Seamus Heaney murmuring over your shoulder. Heaney’s bog people lie fermenting in the marshes, gagged witnesses to more recent killings, “the exact/ and tribal, intimate revenge” much the same down two millenniums. The community chooses someone to blame, erases her humanity by shaving and mutilation, gathers to watch a slow killing. I thought a lot about bog bodies and their ritual murders as I wrote Ghost Wall, which is about an experiment in Iron Age living that gets out of hand.

I began to write the novel in the aftermath of the Brexit referendum. I had a writing residency in Hexham, near Hadrian’s Wall. The English, being imperiously vague about their own boundaries, tend to think of that wall as the border between England and Scotland, but it never was. England and Scotland had not been invented 2,000 years ago. It was the border between the Romans and the others, between civilisation and barbarity. It was the edge of Europe. Trump, as I wrote, was trumpeting about his own wall, also imagined as marking the edge of civilisation. Us on this side, them on the other. Goodies and baddies, citizens and scapegoats, people and enemies.

While I read the inscriptions left in Northumberland by Syrian soldiers who built the Roman infrastructure, Syrians on the news were dying in the wine-dark sea because they had nowhere left to go. In my home city of Coventry, I helped at a youth club for children who had survived that journey, but they had all watched deaths. Tribal, intimate revenge. On the sides of buses and in the tabloid press there were incitements to xenophobic violence, increasingly realised on the streets of England.

The English have never known quite what story to tell about the Romans. The British Empire was run by Oxbridge Classics graduates, whose knowledge of the Roman Empire was considered the ideal basis for the subjugation of foreign parts (Boris Johnson has a 2:1 from Oxford in Classics, Jacob Rees-Mogg likes to tweet in Latin). Like the Italians in Libya and the French in Morocco, there was an idea that the English were reviving and maybe expanding on an old imperial structure: the new Romans. On the other hand, tribal resistance to the Roman invasion of what’s now England offers an irresistible blueprint to those looking for a plucky underdog to celebrate; former Brexit minister David Jones recently quoted Tacitus’s account of Ancient British resistance to the Romans in a meeting of the ERG, although the fact that he did so in Latin indicates who won.

I wrote Ghost Wall into and for our strange moment. The novel is set in the early 1990s, the years of my own adolescence when those of us born as the UK entered what was then the common market were taught that our future was European, that we should learn the languages and read the literatures of other European countries and prepare to inherit the freedom of our continent. Walls were coming down, then, and only our grandparents, who had survived the second World War, knew that they could go back up again just as fast.

My teenage narrator’s world begins to open as ours did, but her father Bill, angry that postwar social progress passed him by, cannot bear her freedom. For Bill (as, apparently, for Jones), the Iron Age, just before the Roman invasion, is the last moment of British purity, the vanished time of authenticity before the foreigners came and tried to stop “us” sacrificing people in bogs; the Romans, of course, preferring crucifixion for ritual killing.

There’s a tradition of nostalgic English nature writing with few European equivalents. The Lost this, the Forgotten that, the Ancient other thing. They do these things differently, or not at all, in France, and not that I have found in Ireland either. I have little patience for this stuff – the writers mourning the past are invariably those who would have done rather nicely in it – but the books feed a national appetite. Modernity is the scapegoat here, and the country was better when there were fewer people cluttering it up and is best now when the narrator is in sole possession of a landscape. Ghost Wall turns away from all this to Heaney’s “unfenced country”, to his reminder that we are all, one way and another, collaborators.

Ghost Wall was published in paperback this week by Granta Books