Knockfane: a novel way of looking at the world of Rathcormick 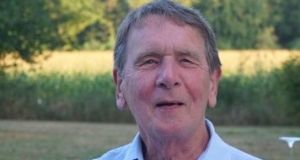 Homan Potterton: I found that, after memoir, there was a tremendous freedom to writing fiction

When I was writing Rathcormick, my memoir of growing up on a farm in Co Meath in the 1950s, I thought that, if the book was ever published, it would have a very limited readership on account of the very tight little Protestant world it described, a world that I knew to be largely incomprehensible to people today.

I was astonished when, on first publication (by New Island in 2002), the book was immediately successful with sales well above expectations. Rathcormick’s popularity was further evidenced by the fact that it was (something like) the most borrowed book from Dublin city libraries in its first six months.

The press took it up and it was widely noticed and reviewed. Of course, I was very gratified by this popularity but also flabbergasted. But that was as nothing to my amazement at the enormous number of letters I received from members of the public.

These were, for the most part, very fascinating for the light they incidentally shed on de Valera’s Ireland of the 1950s and the segregation of Protestant and Catholic that prevailed at the time and all that that entailed. I remember one letter in particular from a lady who announced herself as a Catholic.

“We was brought up to believe that you lot, Protestants, were a completely different race to us Catholics but now when I read your book, I realise we were both exactly the same. My mother behaved in an identical manner to yours and life at home was just like what you describe. I think we were had.”

In Rathcormick I had touched upon some issues which preoccupied Protestants like my parents and I tried to gently spell out the Protestant viewpoint. One of these issues was the subject of what were called mixed marriages; another was the terror which the activities of the Land Commision caused the Protestant farming community. Of the letters I received from readers, there was very little evidence of sympathy for the Protestant viewpoint in relation to the Land Commission; but it was quite a different reaction when it came to mixed marriages.

One correspondent wrote from England: “but there were no immigrants in Ireland in the 1950s so you must be mistaken in writing about ‘mixed’ marriages as there can’t have been any.” A letter from a Catholic in Donegal was more specific: “we were six girls in the family and our parents lived in dread of the day when any of us would want to marry a Protestant. But we girls always did our best to get a Protestant boyfriend. They were so different to Catholic boys. It was nothing to do with religion.”

In setting out to write a memoir, I avoided creative writing classes as I knew they would not be for me. Instead, I reached for some teach-yourself books about writing. In my professional life I had written and published a number of books about art so in taking on the quite different task of writing creatively rather than academically, I had an advantage in that I knew and had already mastered the discipline and concentration that is required in order to get words down on paper or, in my case a keyboard and I knew the importance of keeping to a schedule.

Concurrently with writing Rathcormick, I had a period of writing a regular arts column for the Financial Times and that foray into journalism encouraged me to practise writing in a reader-friendly way. In one of the teach-yourself books I read, it said that in writing about anything that one is supposed to have witnessed, one should think of oneself as being alone in a darkened theatre with the scene to be described taking place on a brightly-lit stage.

As my memoir was to be peopled mainly by my own large family of brothers and sisters, it was they who would occupy my brightly-lit stage. But this posed problems in that certain events and characters which I remembered vividly could not, in the interest of discretion and tact, be written about at all. It came as something of a relief to me, however, when the book was published to learn that my family felt that the world of our childhoods was exactly and accurately as I had described it and that I had made nothing up.

All the teach-yourself books mentioned what I learned were two staples of creative writing classes: a command to “show; don’t tell” and point of view or POV to the initiated. The latter was no problem to me as it was my memories that I was recording and of course they had to be told from my point of view. But I had to be careful not to describe scenes or events where I could not have been physically present .”Show; don’t tell” was made easy when I discovered how useful dialogue could be.

Before writing Rathcormick, I had always considered that the frugal, abstemious, safe lives which Irish farming Protestants led were very uninteresting but, having written the book, I came to the conclusion that there was much that was amusing, ridiculous and interesting about our way of life and thinking and if I was relieved of the constraints of recording fact and free to invent a story set in the same world as Rathcormick but not at all about my family or Rathcormick, I could create characters and make observations that I knew to be typical but nevertheless not actual fact. I knew from the response to Rathcormick (and the size of my postbag), that there was, oddly, an appetite for such a story.

Knockfane was finished at the end of 2008 but when I failed to find a receptive publisher at that time, I put the typescript away and only took it up a year or so ago when I thought it worth trying again to find a publisher. To my relief and joy, Conor Graham and his Merrion Press came to my rescue.

When I re-read the typescript after a 10-year interval, it struck me that as the plot is so complicated with so many surprising twists and turns, that I must have sketched out a plan for how the story would develop, but remarkably (when I think of it now) I had not drafted a plan before starting to write.

I had some ideas for some of the characters: a selfish old father who blights a daughter’s life by having her stay at home to look after him and keep him company was one type that I wanted to use and did. Two elderly sisters obliged to live out their lives together without any real affection between them were other stock characters with whom I was familiar and wanted to include. I felt free to go over my themes of mixed marriages and the Land Commission again. And of course I wanted to focus on property and a complicated will that goes wrong.

I found that, after memoir, there was a tremendous freedom to writing fiction but I remember the tiring sensation of dragging the story out of my brain which was quite different to trying to remember the antics of my pet dog when I was a child or, in the case of art books, ensuring that dates for pictures and buildings were correct. I paid attention to my POVs and refrained from telling in order to show. Learning a new craft at my age proved to be an exhilarating experience and I enjoyed it. Hopefully readers will like the story I had to tell.
Knockfane is published by Merrion Press and is launched this evening at 6.30pm in the Hugh Lane Gallery, Parnell Square North, Dublin