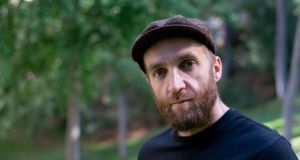 Shane Tivenan: came across Violet Gibson when listening to Lisa O’Neill’s song about her

Shane Tivenan, a writer from Athlone who now teaches English in Madrid, has won the RTÉ Short Story Competition for his first published short story since he started writing just two years ago.

Flower Wild is the imagined interior monologue of Violet Gibson, the Irishwoman who attempted to assassinate Mussolini in Rome in 1926. It was described by the judges as “spellbinding” and “an outstanding piece for radio”. The winners in the literary prize in honour of Francis MacManus were announced on Arena on RTÉ Radio 1 this evening .

Tivenan receives €3,000 for first prize. Second place (€2,000 ) went to Kissing Booth by Alan Walsh from Wicklow town, while The Shape on the Strand by Katherine Duffy, from Dundalk but living in Churchtown, Dublin, came third (€1,000). Seven runners-up each receive €250. All 10 shortlisted stories will be broadcast on RTÉ Radio 1, starting tonight at 11.20pm with the winning story, read by Ingrid Craigie.

Tivenan said he “came across Violet Gibson when listening to Lisa O’Neill’s song about her. I looked into Violet’s life more over the following months and found many unknowns. What stories did she need to tell herself before she upped and shot an Italian dictator? Was it possible for her to stay sane in that asylum for three decades? Was she able to make peace with the complete abandonment, with herself, at the end of a life? These questions haunted me into writing Flower Wild.”

As well as O’Neill’s song, Barrie Dowdall’s film Violet Gibson starring Olwen Fouéré was screened this year at Dublin International Film Festival. Gibson is also the protagonist in Anna Vaught’s Saving Lucia, published this year by Bluemoose Books, about her relationship with James Joyce’s daughter Lucia in the Northmpton asylum where they both ended up.

Vincent Woods, one of the judges, said “the narrative voice is utterly assured and compelling, the story dramatic and poignant, the structure unerring”. Madeleine Keane said the story “distils a whole life into this demanding art form. Much is handled – history, politics, religion – and yet it is so well controlled. As a portrait of madness, it utterly compelling and credible.” Danielle McLaughlin, a previous prize-winner as well as a judge, called it “A spellbinding piece of historical fiction”, presenting “the story of a particular moment in history, while also encompassing the broader sweep of one Irishwoman’s life”.

Kissing Booth is a skewed take on the global pandemic, “inverting a familiar narrative and how that might unexpectedly lead to a utopian conclusion” says its author Alan Walsh, who is “keen on the idea of writing towards a utopia, with the wide range of meanings that word might hold, and how to construct interesting and unexpected ways to get there.” It will be read for radio by Bláithín Mac Gabhann.

The Shape on the Strand is a playful ghost story set on a Spanish island, involving a translator’s transgression and a feathered hat. “The idea of a writer haunting his translator occurred to me when I was abroad, and losing sleep over a difficult literary translation project,” says author Katherine Duffy. Jane Brennan reads the story for radio.

The other shortlisted stories, which will be broadcast on weeknights on RTÉ Radio 1, are: Hands; A Downpour, by Aengus Murray (Valencia, Spain), read by Liam Carney; Neadú by Ceri Garfield, (Mullach Inis, Co. an Chláir), read by Bríd Ní Neachtain; The Brow of the Hill, by Edel Moloney (Shankill, Co. Dublin), read by Derbhle Crotty; Everything Will Be Recorded, by Seán Mackel (Muff, Co. Donegal) read by Lalor Roddy; Beneath the Trees, Where Nobody Sees, by Julie Cruickshank (Dublin 8), read by Cathy Belton; Tactics, by Andrew Maguire (Omagh, Co. Tyrone), read by Ignacy Rybarczyk; Guinness & Coke, by Lochlainn McKenna, Cork, read by Éanna Hardwicke.

Woods observed that “there was a palpable sense of unease running through many of the stories that came to us – a reflection of pandemic times, perhaps.” The diversity of voices and themes is reflected in the shortlist, a mix of the challenging, entertaining, reflective and surreal, he said.

Keane said it was “uplifting to read the richness and range, the diversity and imagination of these short fictions”. McLaughlin said Ireland produces “a kaleidoscope of writing talent”.