Gold Friend by Chris Murray: the title is often the last piece of the jigsaw 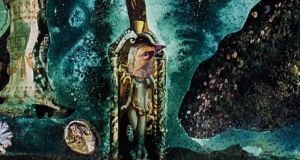 Salma Caller provided the cover art, which is a little bird-headed goddess, a detail from Chris Murray’s chapbook A Hierarchy of Halls

It is not often that a book title eludes me, I often get to the title before the book is completed but in the case of Gold Friend, the title emerged much later. In fact, after the manuscript had been proofed and was being prepared for type-setting.

In the first instance, the title derives from a phrase from the Anglo-Saxon poem The Wanderer, which I somehow managed to carry with me from my studies in Old and Middle English at UCD. The title, by itself, and as an amalgamation of the words Gold and Friend, was both appropriate to the collection and felt natural, even if finding it was stressful to begin with.

The poem image that elicited the book title is infinitely more complex and derives from what I can only describe as textural associations that are rooted very much in a “place”. The place being Drimnagh Castle where I began my work as a stonecutter.

The castle is moated and lit with a submarine-like movement of water at all times. The historical tales that surround the castle converge with more modern stories including a suicide, a community restoration project, and a project to help (mostly) young men find a trade and some pride in what they are doing.

The convergence of influence and imagery that is inherent in Gold Friend began at the castle and works from there into other places and into other books too. The gold friend is both a literary device and an absent person who acts as a passive receptor of knowledge. The gold friend is disembodied, and cannot access the sensory world, or experience it as we do.

Be near enough to the periphery
to discern the wing-settle-sounds
small birds make in thickets,
their halls -
Near enough for red to insist
that you regard it as haw,
rose-leavings
Know, bird-panic sounds
differently to wing-settle’s
soft-rest after the flurry of
flight,
– they say

All the books that a poet writes are interconnected in some way. Gold Friend is connected very much to bind. It comes very soon after the publication of bind because many of the poems were written at the same time as that book. Bind had a thematic thrust that rejected some of the more light-filled poems that inhabit Gold Friend, but they share certain commonalities like the prevalence of the non-human world, the use of a very limited colour palette, and the simple joy of just being in or of this increasingly complex world. Shared themes include necessity, the necessity for description, the non-human and mythos.

Dawn’s advent is sure –
winter’s gradient,
a darklight in
lightswell, the
groundswell –

brown-tipped-streaked
sublunar,
her advent is ||

Her subterranean work
is accomplished,
not pushed off
neither denied,

sure as the blade
holds a-dew-globe
(adieu)
encapsulated,
a pearl, she is

I sent Liz McSkeane a very loose manuscript in early January. It was at that time provisionally (and unimaginatively) titled Five Books and she asked to meet me. We met just before the pandemic and discussed the possibility of making a book. The value of a good editor is not alone in her producing the book, but in her seeing it as a book when the author might not be quite there with it.

The first question that Liz asked me was: “Does the tree at the centre of the book survive?” From that point, we discussed whether the book would be one of hope, or of despair – of progression or of regression, in an era of ecological disaster (mostly caused by governments that talk crap and do nothing legislatively). We both decided that the final poem of the book would be a very angry new Eve, a reverse Sheelagh-Na-Gig, and that the book would begin with a non-human voice or absence.

All the work that we undertook to finish the book was done remotely and with the collaboration of Salma Caller, who provided the cover art. The cover art is a detail from my chapbook A Hierarchy of Halls and is a little bird-headed goddess, which connects Gold Friend with the chapbook both thematically and artistically.

Around the time of completing the book proofs, a poem from the book, Nocturne For Voices One and Two, was accepted by Una Lee who is producing an album in 2021 which will include works by Siobhan Campbell, Gabriel Rosenstock, David Butler and others. We previewed the sound art as part of our non-traditional virtual launch on September the 8th 2020. This is a film of the launch.

Lucy Collins wrote about the book and interviewed me at Liz’s home for the virtual launch. I am very indebted to these women who have worked so hard for this book throughout the lockdowns and with a lot of difficulties. We met again two weeks ago after not seeing each other for months. I have been thinking a lot about the spaces that we create in order for the poem, and indeed the collaborative art associated with the poem to be heard, read, and encountered by the reader.

My interest as a poet is primarily in text and in the creation of the book but I have made some space in my life to platform the poem over some years through various sites, especially in Poethead.

I am taking this opportunity to thank all the poets, editors and translators who have entrusted me with their work over these 12 years. The site will be closing in early 2021. I am looking at ways to keep the work available to the many readers who have visited the site. I feel very strongly that it is time for me to withdraw and focus on my work in progress (which has a title).
Gold Friend is published by Turas Press