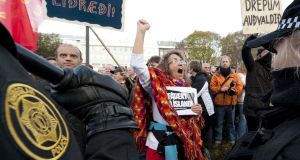 Hundreds of people protest outside the Icelandic parliament in Reykjavík in October, 2010 against evictions after a recession sank the country’s banking sector and forced the collapse of the Icelandic government. Photograph: Halldor Kolbeins/AFP/Getty Images

Anger and anxiety seem to be the two dominant emotions of our day. At the group level we see civil unrest, industrial strife and prejudice towards migrants. At the individual level there’s criminal activity, mental health issues and deaths of despair. Is there a root cause? Is there something that links the feelings of the individual to the actions of the collective? And is there something we can do? According to authors Mark Blyth and Eric Lonergan, there is. They call it Angrynomics.

This summer produced numerous popular economics books but none seeks to address the question of why there is so much anger, and why mainstream economics fails to grasp this, quite like Blyth and Longergan’s new work. Anger, as they see it, “unites the public and private, the macro and micro”. It allows us to comprehend key political economy developments of our time and contextualise many seemingly chaotic and disparate events.

Arguing from the outset that the neoliberal order is broken, they call for a major system reset. Contemporary politics has for some time been ruled by a kind of “anodyne centrism”, leaving us “not only bereft of motivating political identities, but also…bereft of ideas”. They’re not calling for a return to the pre-crisis 2000s à la Joe Biden’s current campaign message, nor a longing for the old 1970s social democratic model, in the vein of Jeremy Corbyn’s. The authors want to chart a new course which they believe will redress the current imbalance between capital and labour, through the enactment of some novel policy prescriptions.

This is not some scholarly treatise written for academic/professional colleagues. It’s written for the layperson in a style that’s casual and engaging. Through a kind of Socratic dialogue between our two authors, their conversational format lets them tease out ideas in a back and forth exchange, whilst inviting the reader to reach their own conclusions.

Weaving back and forth across four overlapping themes: there’s a crash course in recent political and economic history laying the groundwork for “how we got here”, a lively dialogue on public anger and how it manifests itself in legitimate moral outrage or illegitimate tribal prejudice, a short dialogue on private anger and lastly, as is conventional in popular economics books, the what is to be done section.

Separating public anger into two categories: moral outrage and tribal energy, the former is a kind of righteous indignation, the collective sense that “enough is enough”, which they see as a legitimate response to people’s sense of economic injustice and political helplessness. Genuine concerns individuals have around job insecurity, loss of representation, economic inequality and a discredited political establishment serve as collective motivators. Examples include the Icelandic protests following the Panama Papers release, and France’s yellow jackets movement.

This is contrasted with the category two – tribal anger – which is cynically weaponised by political opportunists. Right-wing populists, preying on the private anger and economic insecurities of voters, try to channel this outrage against foreigners and “others”. Trump, Modi and Orban feature as examples of populist leaders, with events such as Brexit cited as populist moments where people mistakenly believe they could “take back power”. As they state, people have every right to be “pissed off”, but caution, “be pissed off about the right things”.

Up until this point the authors sketch out well some of the major causes of societal anger and anxiety. Yet their remedial policy prescriptions raise major questions about whether they would achieve these aims. Some proposals are certainly worth considering, but their dismissal of others, in the absence of any serious consideration, seems at best a missed opportunity and at worst disingenuous.

They reject Thomas Piketty’s global wealth tax and the EU’s digital sales tax because of insurmountable collective action problems, and the unavoidability of aggressive multinational tax avoidance. Regarding Piketty we agree, but for the EU we’re not so sure. Yes, there is opposition to the digital sales tax – Ireland in particular – but Covid19 will bring renewed pressure, so this can’t be ruled out. Also, the base erosion and profit shifting (BEPS) initiative, country by country reporting and the moves toward corporate taxation based on formulary apportionment, means curbing aggressive tax avoidance is now a real possibility.

Instead the authors propose making tech firms pay a data dividend for using of our data to pay for a universal basic income (UBI), but it’s not made clear why tech firms would acquiesce to such a thing when, as the authors recognise themselves, they go to such lengths to avoid tax?

Similarly another other big idea in economics which is generating a lively debate, that of modern monetary theory (MMT), is given short shrift. MMT describes how the plumbing of the financial system works and how governments actually fund themselves, therein arguing that many governments can fund a job guarantee to bring about full employment. The heart of its contention goes very much to Keynes’s line that “anything we can actually do, we can afford”. Yet the authors dismiss MMT as a “free lunch” but don’t offer a substantive critique. This is curious given that one of the author’s recently described Economist Stephanie Kelton’s new book on MMT as “the one economics book you should be reading this summer”.

Their central policy proposal is the creation of national wealth funds, which they argue offer “a more innovative and rigorous framework for using the state’s balance sheet to address wealth inequality”. This is where serious doubts arise. They contend that states should take advantage of the low-negative interest rate environment – and here we agree. However, their proposal is to borrow around 20 per cent of GDP, about €67.8 billion for Ireland (2019), to invest in stocks to make a return of up to 6 per cent. This surplus this would generate would be distributed “after the debt has been repaid, in 10-15 years, depending on the success of the investments”.

Stock markets have been massively overinflated (think bubble) since the onset of quantitative easing with 80 per cent of fund managers in agreement. Ownership is also highly concentrated, for example institutional investors own around 80 per cent of all the stock on the S&P 500. Would nations investing 20 per cent of GDP into stocks not cause massive further inflation? Would sharp ownership concentration not allow the beneficiaries of QE to exit their positions at an artificially high rate, whilst leaving states on the hook for the eventual collapse? What would be the implications for Ireland buying shares in Google, Facebook and Apple, companies that comprise a large part of our corporate tax base, and which have used Ireland for aggressive tax strategies (Double Irish /Stateless Income)?

Lastly, returns of 6 per cent seem rather dubious, and as regards the timeline for payoff (up to 15 years); let’s just say that as people writing in our early 30s, we can’t afford to wait that long. A more pragmatic way for states to address societal anger and anxiety is to tackle the main economic problems of the day. Build more affordable housing, create better health care systems and infrastructure, and provide decent paying jobs – don’t go taking a spin on the stock market.

Cillian Doyle is a final year doctoral student in the School of Business, Trinity College. Mairead Farrell is Sinn Féin’s spokesperson on Public Expenditure and Reform.