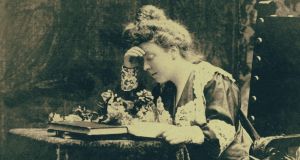 We are told the past is another country, but it is often striking how contemporary a figure recovered from the obscurities of history can feel to us. The famously forgotten Irish writer Hannah Lynch is one such figure, whom Faith Binckes and Kathryn Laing bring to uncanny life.

The authors’ evocation of Lynch’s own acute, wry self-awareness can make for an unusual reading experience. At times Lynch seems to nod in agreement at the shoulder of the engrossed reader, sharing her concerns about forgotten lives and careers, the invisibility that is too often the fate of those whose work and life exceed easy categorisation.

As Binckes and Laing say of their subject, “Lynch was well aware that ‘biography’ and ‘history’ are genres open to subversion, deformation and play, and that women’s lives are particularly vulnerable to misinterpretation.”

This study offers a glimpse not only into the life of a neglected Irish writer, famous in her time, but also into a robust international women’s culture at the fin-de-siècle that only recently has become the subject of critical revival, to which Irish writers, artists, journalists, and activists contributed significantly.

Among the book’s signal achievements is its delineation of the role Irish intellectuals played in the vibrant European metropolitan culture of the Victorian and Edwardian eras. The canon of post-1800 Irish history has been undergoing re-evaluation in recent years, growing more complex and nuanced, especially in the work being done on women who fall outside of the cliched stereotypes of heroic soldiers, crafty negotiators, or dreamy poets.

This is not to suggest, however, that Lynch was not heroic: one of her most astonishing feats of courage was risking physical safety to smuggle the plates of the United Ireland newspaper out of the country to France when the publication was proscribed in 1882. This bold undertaking led Myles Dungan recently to characterise Lynch as “one of the most prominent, enterprising and tenacious members of the Ladies’ Land League”. Lynch’s intellectual daring was even more impressive and sustained. She fearlessly challenged powerful political and cultural forces and individuals in her writing, both fiction and journalism.

A 1902 Harper’s Bazaar column, Recent Happenings in Paris, identified “Miss Hannah Lynch” as “the most gifted woman Ireland ever produced”, a woman this deeply researched study describes as “supremely modern”. From where did such a “modern,” “enterprising,” “gifted” woman emerge, only to sink from view?

Lynch was born in Dublin in 1859 to a politically active family. Her stepfather, James Cantwell, had been a Young Irelander, involved in the 1848 rebellion. After a peripatetic career as a Fenian agent, Cantwell settled in Dublin and married Lynch’s widowed mother (probably in 1860 or early 1861). Once relocated to the Irish capital, he became an active member of the Home Government Association, the Home Rule League, and the Amnesty Association. There are indications that into the 1880s Cantwell was on familiar terms with leading figures in the “dynamite campaign” against the British empire, including Jeremiah O’Donovan Rossa.

According to the poet Katharine Tynan, Lynch and her sisters were members of not only the revolutionary political organisation, the Ladies’ Land League, but also “Dublin bohemia”, which was closely aligned with European, and especially Parisian, culture. Tynan described the Cantwell-Lynch family as “bookish” and as a formative influence on her own literary career.

This particular mix of letters and politics continued to distinguish Lynch’s work to the end of her short life. The Ladies Land League was created in 1881, an auxiliary branch of Michael Davitt’s Land League, devoted to the reduction of rents, the eventual seizure of land from landlords, and achievement of land ownership to tenant farmers. The Ladies’ Land League was formed to provide continuity when the male leadership was imprisoned, and offered what was at the time a rare opportunity for women’s collaborative political activity.

The organisation provided inspiration for first-wave Irish feminism and has also been associated with emerging Irish women artists of the fin de siècle, especially those identified as “New Woman” writers. In addition to her work for the Ladies Land League, the 1880s were significant for Lynch on several fronts: she began to be published in England, Ireland, and the United States; attended Tynan’s literary salon, where, in the company of salon regulars like WB Yeats, Douglas Hyde and George Russell, she witnessed the early formation of what would become the Irish Literary Revival; and joined a number of important political, publishing, and literary networks in Ireland and elsewhere.

However, even as Lynch was establishing herself in these worlds, she maintained a striking critical distance and scepticism toward all political and literary trends, including those in which she was implicated. While she would satirise “revivalist aesthetics” and critique the versions of Irish nationalism she saw developing, particularly the gender politics of both, she would at the same time “smuggle an anti-imperial text into a pro-imperial journal.”

Her own gender politics also resisted conforming to expectations. She would write conventional romances about girls and childhood for certain publication, but even her “cosy themes were shot through with irony and ambivalence”. Lynch’s positions could be hard to define, not consistently radical or conservative, a kind of intellectual restlessness and impatience that caused her discomfort with the label of “New Woman” writer and to extend her wariness of doctrinal thinking to emerging feminisms as well.

Lynch challenged popular political stands, for example, complicating her life and threatening her own career by vigorously defending French officer, Captain Alfred Dreyfus, against a famously false conviction of espionage. The anti-Semitism that animated these charges argued that, as a Jew, Dreyfus was not really “French” and was therefore inherently disloyal. Through her writing Lynch imagined a more flexible, inclusive understanding of national identity, “a cosmopolitan modernity in which national identities are not erased but hybridised and recombined,” a concept with implications for Irish nationalism. This idealised hybridisation was not “an accomplished merging or interpenetration, but a messy series of adjustments, often ambiguous and still in process.” Lynch regularly braved and even invited messiness and ambiguity.

Writing for both traditional women’s journals and pro-imperial organs indicates only a small sample of the variety of outlets that Lynch found for her journalism, travel writing and fiction. One of this study’s many fascinating historical insights is the range of publishing opportunities in the Irish, English and European periodical press of the era, including political, religious and literary publications, featuring an unexpected number of crossovers in both contributors and readership.

Lynch was not alone in her transnational interests and activities or in her complex ideological affinities. The story Binckes and Laing tell is not of one woman’s experience, but a complication of accepted narratives, including those that have accumulated around the literary culture of revival-era Ireland. The heterogeneous world of letters revealed here will rewrite our impressions of the fin-de-siècle period as experienced by Irish intellectuals, largely by restoring its cosmopolitan texture, usually written out of conventional accounts of this time and place.

The authors provide rich transcultural, political, and literary contexts for reading Lynch’s work and encourage a re-evaluation of canonical Irish writers like James Joyce, Thomas Moore and Yeats, as well as of modernists like Joseph Conrad, Virginia Woolf and George Meredith, a particularly important figure for Lynch. We are also introduced to lesser-known contemporaries of Lynch whose lives and careers offer revealing parallels, like Emily Crawford, Alice Corkran and Frances Low. The Lynch “case study” recognises the importance of women’s professional and affective networks in the development of an Irish intellectual of the early 20th century.

Lynch’s modernity, for Binckes and Laing, is evident in her “mobility”. While she lacked the traditional “womanly” attachments of marriage and family, she enjoyed a wealth of professional connections. The strengths of these networks were vital for the survival of an unmarried, independent working woman, whose curiosity and drive sent her around the world, ever receptive to new experiences and perspectives. Lynch knew and wrote about “cultural dispossession, the reality of poverty”. The struggle to live beyond convention could be daunting and exhausting, especially in the last year of her life, when illness made work impossible.

Precise details of where she lived and when are not yet available in their entirety, but by dint of their own international labours, the authors have done a remarkable job of unearthing clues to Lynch’s movements and connections. Binckes and Laing write for an impressive variety of audiences: those interested in Irish history, in women’s history, in literary history, in cultural transnationalism at the turn of the 20th century, and for literary scholars, and even general readers, who enjoy skilful and tantalising close readings, illustrated by generous excerpts of the original texts.

The chapters engage with the themes and conditions of Lynch’s own writing, including connections and intersections, “vagabondage,” identity and cosmopolitan modernity. The authors make a compelling argument for reading Lynch as a modernist, whose style, which distinguished both her travel writing and her fiction, could be described as “literary impressionism”.

For example, her subversion of the “unthreatening” genre of nursery biography, in her master work, Autobiography of a Child (1899), is comparable, the authors argue, to Conrad’s deployment of the imperial adventure. Lynch’s self-conscious deployment of various genres in this novel, including the künstlerroman and the fairy tale, indicates a modernist sensitivity to “artifice and craftedness that conceals and reveals.”

The voice that emerges from the primary texts, amplified through deft analysis, speaks to 21st century preoccupations with issues of identity, our social and cultural interpellations, and the experience of late modernity as distinguished by “fracture and plurality”, a state of raw vulnerability at once perilous and thrilling. Lynch was witty, scabrous, principled, brave, adventurous, intelligent and certainly one of Ireland “most gifted” women. Binckes and Laing have done an immense service by restoring her to us.