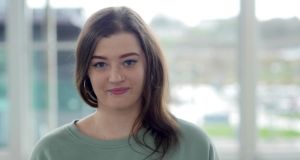 Caragh Maxwell: a second-year student at Sligo IT, her essay was the most popular article in Irish Times Books this year

The most-read article in The Irish Times books section in 2019, by a margin of more than 20,000 views, was this remarkable essay on her troubled relationship with her body by Caragh Maxwell, at the time a first-year student on the writing and literature BA at Sligo IT.

The essay, published under the title, I hoped to God that I’d just die in the night and get it over with, came to me via one of her tutors, the author and regular Irish Times reviewer, Eoin McNamee, who is now director of the Trinity Oscar Wilde Centre and director of the M Phil in creative writing at Trinity College Dublin.

The essay went viral, prompting many published writers to express their admiration on social media and several literary agents to contact the author. Here is a sample of the piece.

“By the time you’re 25, your heart will have beat almost a billion times. I am rapidly approaching my billionth beat, the cardiac muscle holding its own as I learn to work with it instead of against it. I have inhabited this body for almost a quarter of a century and in that time I have suffered more than some people do in one hundred lifetimes ... Like everything else on this planet, this mishmash of flaws and good intentions is derived from stardust. I will be inside this vessel until the day I can return to the atmosphere. Until then, we are tentative friends, learning to be kind to each other. Who will love us if we don’t love ourselves?”

The second most-read article was published in March to mark the day on which the United Kingdon was supposed to leave the European Union. I canvassed the views on Brexit of Irish writers living in Britain and in the North, the tenor of which is captured by the headline: Brexit is aggressive and dangerously nostalgic. The UK is in for a brutal chastening. It is interesting to compare it to this article, ‘UK was groomed’: Irish writers throw book at Brexit, published after the Brexit referendum in June 2016. (Timothy O’Grady’s Brexit poem came in at 21st.)

Our third most-read story was first published in February 2018, evidence of the internet’s “long tail”. What did Jesus really look like, as a Jew in 1st-century Judaea?is clearly a question that many readers are curious to know the answer to. Joan E Taylor, Professor of Christian Origins and Second Temple Judaism at King’s College London, set out the evidence.

Richard Dawkins, one suspects, could not care less about Jesus’s appearance. The leading atheist is however, passionate about what he sees as the calamity of Brexit, which dominated his interview with Joe Humphreys, our fourt most-read article.

This powerful extract from Children of the Troubles by Joe Duffy and Freya McClements, a record of all those 16 and under killed during the conflict, was our fifth most-read article.

My annual survey of poets’ favourite love poems, Love poems: ‘For one night only naked in your arms’ - 14 poets pick their favourites, is our sixth most-read article. Interestingly, however, it was the 2018 version, with the 2017 edition, ‘Take your clothes off’: Poets reveal their favourite love poems, coming in at 87th. Here is a link to this year’s model, which was in 78th place and is I think equally deserving of a little love.

In seventh place is Same same but different, a short story by Anne Hayden, which was the Hennessy New Irish Writing competition winner back in April 2016. It appears to have made its way on to the Danish school curriculum. Go figure.

In eighth place is Classic horror: the 10 most terrifying short stories ever written, selected by Trinity College’s Darryl Jones, the author of Sleeping With the Lights On: The Unsettling Story of Horror.

Short stories also feature in ninth and 10th place on our list, by one of our most celebrated writers and by a teenager making her publishing debut as part of Fighting Words – The wise man, a short story by Donal Ryan (from Christmass 2015!) and My Mammy lives in a box by Amy Cahill.

Ducks Newburyport by Lucy Ellman was another huge success for Galley Beggar Press – it won the Goldsmiths Prize and was shortlisted for the Booker Prize. Her marvellous essay about it was a bit of a hit for us too, coming in in 11th place. Here’s a sample: “There is a female cosiness factor involved in spreading out a big, fat, soft book for the reader to tramp around in. I wanted a certain gentleness to prevail too, in a novel that, if nothing else, offers an antidote to the priorities of testosterone.”

Sam Thompson, a former RUC man whose novel about an RUC man during the Troubles, Nights in Armour, was first published by David Trimble and endorsed by Danny Morrison, struck a chord with his article about the Troubles, published in the wake of the murder of his fellow writer Lyra McKee. (My account of Lyra’s life and legacy was at 67th.)

Our most-read review was Diarmaid Ferriter on Inglorious Empire: What the British Did to India, Shashi Tharoor’s angry history of British rule in India which he found to be a timely response to empire nostalgia. Interestingly, it was published in March 2017.

In 14th place is another beautiful essay, Second-generation Irish: ‘We were outsiders among the English – and the Irish too’ by the poet Ian Duhig, taken from I Wouldn’t Start From Here: The Second-Generation Irish in Britain, a collection of writing and memoirs published by The Wild Geese Press.

It ends with this remarkable poem he workshopped with members of Leeds Irish Health and Homes.

I am the wind on the sea
and in a horse’s mane;
I am the sound of the ocean
and the engine of a plane;

I am the tear of the sun
and its loveliest flower;
I am the hungry family
in its emigrant hour.

I know your streets
aren’t paved with gold
because I laid them,
come rain or cold,

I am the slighted Irish
minding your sick,
teaching your children.
You called me thick.

I worked like a donkey,
a Trojan, a slave.
I paid my way here;
I earned my grave.

In 15th place is a very different extract, Grindr, blackmail and confession: The life of a gay seminarian, taken from Frédéric Martel’s In the Closet of the Vatican: Power, Homosexuality and Hypocrisy.

In 16th place overall was Amy O’Connor’s news story about John Boyne’s decision to delete his Twitter account after the furore over his take on the trans issue (30th) – subject of his YA novel, My Brother’s Name is Jessica – prompted several high-trafficking articles, including this response by Aoife Martin (28th).

In 17th place was Mark Hilliard’s news story about how John Banville was the victim of a cruel hoax claiming he had won the Nobel Prize in Literature.

Our fascination with the US presidency accounts for the last three spots in our top 20. First up is Stephen Philips on the highlights of Michelle Obama’s bestselling autobiography Becoming; then Elisabeth Egan on Six things we’ve learned from Melania Trump’s unauthorised biography; and finally Inside the Trump presidency: A mad king roams empty halls, Hugh Linehan’s interview with Michael Wolff, author of Fire and Fury and Siege: Trump under Fire.

Other essays to strike a chord with readers were I was seven when Dad died. I thought I found him in our attic one summer by Fionnuala O’Leary (79th) and Don’t dip your pen in someone else’s blood: writers and ‘the other’ by Kit de Waal from last year (76th). And this one meant a lot to me: The support act’s T-shirt shrank so Fatboy Slim made me a mixtape.