In Becoming, Michelle Obama’s autobiography, she details anger at Christopher Hitchens and admiration for the queen 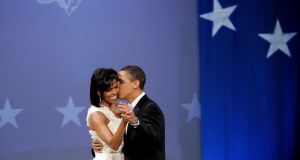 Michelle and Barack Obama dance upon his inauguration as US president on January 20th, 2009 at the Washington Convention Center in Washington, DC. File photograph: Justin Lane/EPA

Michelle Obama’s Becoming chronicles its author’s vertiginous rise from humble origins on Chicago’s South Side though Princeton and Harvard law to a coveted position at a swank law firm in downtown Chicago. Here, she met Barack Obama, then an intern on vacation from his own legal studies at Harvard. The two fell hard for each other.

Not your average boyfriend
Idealistic and wonkish, Barack wasn’t your average boyfriend: “I woke one night to find him staring at the ceiling, his profile lit by the glow of streetlights outside,” recounts Michelle. “He looked vaguely troubled, as if he were pondering something deeply personal. Was it our relationship? The loss of his father? ‘Hey, what’re you thinking about over there?’ I whispered. He turned to look at me, his smile a little sheepish. ‘Oh,’ he said. ‘I was just thinking about income inequality.’”

Barack’s aggravating disregard for punctuality
Michelle credits Barack with inspiring her to “swerve” from a law career she found dry and isolating to more fulfilling work in nonprofits, community relations and university administration. But his habits could be exasperating, especially when the couple had kids: “If Barack’s disregard for punctuality had once been something I’d gently teased him about, it was now a straight-up aggravation…I’d hear his excitement when he called to report that he was done with work and finally headed home…And then I’d wait…On my way, I was learning, was the product of Barack’s eternal optimism, an indication of his eagerness to be home that did nothing to signify when he would actually arrive. Almost home was not a geo-locator but rather a state of mind.”

Then there was his version of the man-cave: “He worked late at night in a small room we’d converted to a study at the rear of our apartment - a crowded, book-strewn bunker I referred to lovingly as the Hole…Barack, I’ve come to understand, is the kind of person who needs…a closed-off little warren where he can read and write undisturbed. It’s like a hatch that opens directly into the spacious skies of his brain. Time spent there seems to fuel him…There he can flip between the six or seven books he’s reading simultaneously and toss his newspapers on the floor.”

‘I thought he’d get eaten alive’
Shes was trepidatious about his entry into the rough-and-tumble of politics: “…I thought of lawmakers almost like armoured tortoises, leather-skinned, slow moving, thick with self-interest. Barack was too earnest, too full of valiant plans, in my opinion, to abide by the hardscrabble, drag-it-out rancor…Quite honestly, I thought he’d get eaten alive.”

Conversely, though, she concludes: “He was strangely suited to the tussle of lawmaking, calm inside the maelstrom, accustomed to being an outsider, taking defeats in his easy Hawaiian stride. He stayed hopeful, insistently so, convinced that some part of his vision would someday, somehow manage to prevail.”

Still, she remained a reluctant political spouse, consenting to Barack’s 2004 Senate bid on the proviso that “[I]f he lost, he’d move on from politics altogether and find a different sort of job,” for instance as “head of a foundation.” Moreover, amid the clamour for him to run for president in 2008, she initially pressed him to defer until 2016: “Just for once, I wanted him to be content with life as it was. I didn’t understand how he could look at Sasha and Malia, now five and eight, with their pigtailed hair and giggly exuberance, and feel any other way. It hurt me sometimes to think that he did.”

On the campaign trail, she describes the cognitive dissonance of finding herself suddenly elevated to celebrity status: “I had Oprah Winfrey sending my encouraging texts. Stevie Wonder, my childhood idol, was showing up to play at campaign events, joking and calling me by my first name as if we’d known each forever.”

Christopher Hitchens lambasted
Besides excoriating Trump who she blames for endangering her family by whipping up birtherism, she lambasts late Anglo-American journalist Christopher Hitchens – his column ridiculing a thesis she wrote at Princeton still rankles: “He tore into college-age me, suggesting I’d been unduly influenced by radical black thinkers and furthermore was a crappy writer…It was a small-minded and ludicrous insult, sure, but his mocking of my intellect, his marginalizing of my young self, carried with it a larger dismissiveness.”

As First Lady, Michelle championed a drive to reduce childhood obesity among other initiatives. She also relates the trials of raising teenagers in the White House: “’Don’t you want to come downstairs tonight to hear Paul McCartney play?’ ‘Mom, please. No.”

Finally, during their whirlwind of official visits, the first couple developed a soft spot for the queen of England. Her unpretentiousness reminded Barack of his grandmother while Michelle marveled at the spectacle of seasoned royal efficiency in working-and dispatching-a crowd, compared to her husband’s garrulousness: “[T]he Queen managed to whisk people speedily past with economic, friendly hellos that left no room for follow-up conversations, while Barack projected an amiable looseness, almost inviting chitchat and then ponderously answering people’s questions, thereby messing up the flow of the line. All these years after meeting the guy, I was still trying to get him to hurry up.”
Becoming by Michelle Obama is published by Viking, at £25