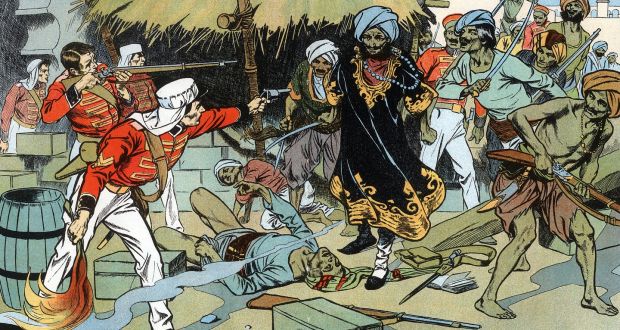 Private army: the East India Company had 260,000 soldiers at the start of the 19th century. Illustration: Ann Ronan Pictures/Print Collector/Getty

Book Title:
Inglorious Empire: What the British Did to India

Chronicling the evils of British imperialism is imperative given the impact and legacy of that imperialism, and given the dishonest and selective nostalgia about it, not to mention downright ignorance. Almost 60 per cent of Britons were proud of the British Empire and almost 50 per cent thought it had made the colonies better off – a manifestation of what the scholar Paul Gilroy has termed postcolonial melancholia – according to a YouGov poll in 2014.

Inglorious Empire, by Shashi Tharoor, a United Nations diplomat turned Indian National Congress MP in New Delhi, adds to a growing list of books on what the British did to India, most recently Jon Wilson’s India Conquered: Britain’s Raj and the Chaos of Empire. Wilson underlines how the British view of themselves as conquerors generated a racist delusion of “victor’s sovereignty”, an argument still fuelled by the current wave of empire nostalgia.

Tharoor notes, somewhat quietly in a footnote towards the end, that Wilson’s effort was published “just as this book was going to press” and “makes much the same case” about the extent to which Britain benefited from imperial rule at the expense of the conquered.

The growing library is justified; Britain’s exploitative, racist imperial project in India was awesome in its savagery and vindictiveness, what Tharoor calls a “long and shameless record of rapacity”. The recent books are a welcome antidote to the nauseating righteousness and condescension pedalled by Niall Ferguson in his 2003 book Empire, which argues that British imperialism gave to the world its admirable and distinctive features (language, banking, representative assemblies, the idea of liberty) and that India, “the world’s largest democracy, owes more than it is fashionable to acknowledge to British rule”.

Tharoor sets out energetically, bluntly and hurriedly the litany of exploitation and theft, and the support given to the East India Company. This was before the Government of India Act of 1858 led the British crown to assume direct control. The company had a private army of 260,000 at the start of the 19th century, and the champions of the British industrial revolution plundered India’s thriving manufacturing industries.

Under British rule India’s share of world manufacturing exports fell from 27 per cent to 2 per cent as East India employees made colossal fortunes. The marquess of Salisbury, secretary of state for India in the 1870s, remarked that “India is to be bled”, and by the end of the 19th century it was Britain’s biggest source of revenue.

“To stop is dangerous; to recede ruin” was the logic, as enunciated early by Robert Clive, commander in chief of British India in the mid-18th century. The Indian shipping industry was destroyed and Indian currency manipulated while tariffs and regulations were skewed to favour British industry.

This fostered a court culture for Indian princes to follow, and there were many dissolute rajas, but just 4 per cent of the coveted positions in the Indian civil service were filled by Indians as late as 1930. The nationalist leader Jawaharlal Nehru was cutting in his dismissal of a civil service that was “neither Indian, nor civil, nor a service”.

By 1890 about 6,000 British officials ruled 250 million Indians, but there was also a “cravenness, cupidity, opportunism and lack of organized resistance on the part of the vanquished”.

Ultimately, it was the rise of Mahatma Gandhi and his promotion of the moral values derived from satyagraha (nonviolent resistance) that “proved a repudiation of British liberalism and not its vindication”.

Racism was also reflected in the penal code: “there had never been a taboo against homosexuality in Indian culture and practice until the British Victorians introduced one.” Crucially, Britain also “helped solidify and perpetuate the iniquities of the caste system”, which was made out to be more uniform and pervasive than it had been. Religion became a useful means of divide and rule, with the fostering of a two-nation theory that eventually divided the country and made partition inevitable; one million were killed and 17 million displaced.

Tharoor’s assertion that “stories abound” of Hindu and Muslim communities “habitually working together in pre-colonial times” is a bit loose and ambiguous, but Lord Oliver, the secretary of state in the 1920s, admitted a predominant bias in British officialdom in favour of the Muslim community to offset Hindu nationalism. The British also sponsored a Shia-Sunni divide in Lucknow and generally transformed religious differences into public, political and legal issues.

There are also reminders of the vile racism of Winston Churchill: “I hate Indians. They are a beastly people with a beastly religion . . . Let the Viceroy sit on the back of a giant elephant and trample Gandhi into the dirt.” Tharoor seeks to demolish the myth of “enlightened despotism” given brutalities like the Jallianwala Bagh massacre of 1919, with soldiers “emptying their magazines into the shrieking, wailing, then stampeding crowd with trained precision”. It is a pity he does not give the context for the comment of William Joynson-Hicks, home secretary in the 1928 Conservative government of Stanley Baldwin, that “we conquered India by the sword and by the sword we shall hold it. I am not such a hypocrite to say we hold India for the Indians.”

Up to 35 million died unnecessarily in famines; London ate India’s bread while India starved, and in 1943 nearly four million Bengalis died. It was their own fault, according to the odious Churchill, for “breeding like rabbits”. Collectively, these famines amounted to a “British colonial holocaust”.

Tharoor finds the argument that modernisation could not have taken place in India without British imperialism to be “particularly galling”. In response to the claim that empire laid the foundations for eventual success in a future globalised world, he quite rightly observes that “human beings do not live in the long run; they live, and suffer, in the here and now”. And although the “gift” of the English language cannot be denied (“I am after all using it as I write”), there was only a 16 per cent literacy rate at the time of Indian independence.

Inglorious Empire is not, however, a polished effort; it seems rushed. Tharoor admits the decision to write it, following online reaction to a provocative lecture he gave at Oxford, was “made rashly”, and it shows. It is too derivative and at times sloppy and sketchy, and the over-reliance on anecdote does not generate confidence. (“The story is told – I cannot pinpoint the source”; “There is a story – perhaps apocryphal”). He generalises when there is no need to, and the book becomes too repetitive (“Let’s look at the numbers one last time”).

There are also too many sweeping assertions: “By the early 1800s India had been reduced from a land of artisans, traders, warriors and merchants functioning in thriving and complex commercial networks into an agrarian society of peasants and moneylenders.”

Indeed, it is so staggering that it becomes quite exhausting, but that should not merit too much sympathy for the well-connected, -heeled and -staffed Tharoor. He thanks his “two tireless researchers . . . who bore the brunt of the load” and a staff that “backed me up in a hundred vital ways throughout the writing of this book”.

Tharoor also had the generous hospitality and support of “His Majesty Jigme Khesar Namgyel Wangchuck, King of Bhutan”, without whom “I would have been unable to write this book or finish it within deadline”.

Isn’t it well for him?