We are Made of Earth: Greece’s leading novelist explores refugee crisis

Review: Panos Karnezis focuses on meaningless of life when context and hinterland removed 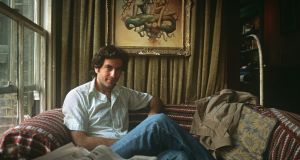 Book Title:
We are Made of Earth

Panos Karnezis is possibly the leading Greek novelist of his generation, and one of Europe’s most distinguished storytellers.

His early novels, with Greek backgrounds, explored themes in his native culture such as disorientation, hope, fear and greed, which he has more recently transposed to a wider canvas. The Maze centered on the emotions aroused by the rout of the Greek army in Turkish Anatolia in 1922. The Birthday Party exposed the fears of an Onassis-type tycoon. But The Convent was set in Spain, and The Fugitives was laid in Latin America (The Mission territory, both physically and metaphysically). Each of them examines human weaknesses and strengths when confronted with challenges that seem to be sent by God from hell.

In We are Made of Earth (not the most exciting of titles) he takes us, perhaps irresistibly, to the current refugee crisis and, although his location is dystopian, it can be readily imagined as a remote Greek island on which both the tragedy and the comedy of human weakness are acted out.

The main players – until the huge influx of refugees in the last part of the story – are a doctor, Mokdad, and a young boy, Jamil, possibly Syrian or Afghan, arriving on the island after surviving the wreck of their boat, only to be greeted, somewhat bizarrely, by an Asian elephant called Shanti (meaning “peace”), the star of a defunct circus with a horrible resemblance to the situation in Brian Friel’s Crystal and Fox. Their interplay with the circus owners is set against the island itself, a gradually intensifying drama that is catalysed by the sudden arrival of hundreds of similar refugees.

The developing relationship between the doctor, the boy and the circus owner and his wife, each with their own secret agenda, is subtly and compassionately drawn. In fact it is Karnezis’s characteristic compassion which defines a narrative skill which could otherwise become vindictive.

All of them, and the native islanders themselves, are prisoners not only of circumstance, but of necessity and even of choice. Karnezis suggests that it is not only refugees, but those whose hopes have met an unfortunate reality, who (as in Peter Ustinov’s story Frontiers of the Sea) spend their lives “staring at the horizon”.

Karnezis examines with both love and cruelty his character’s attitude to fate. The stasis of the drama is contrasted with the determined haste with which the new influx of refugees address their necessity to be elsewhere. These refugees retain some sense of purpose, of destiny, as a means of combatting their current misery, whereas Mokdad, Jamil and the circus people – including Shanti, who becomes a vital personality – pursue a philosophical acceptance of a fate which is always receding, diminishing and, ultimately, evaporating. The boy Jamil, trying to find a way out of the web in which exile and shipwreck have caught him, works out that “God belonged to the adult world, which was enough reason to regard Him with suspicion”.

The “realities” of the current crisis between Greece and Turkey, with mostly Syrian refugees caught between them, intrudes slightly into Karnezis’s narrative. He presents us with the stark contrast between Mokdad, the doctor, before and after: “Educated, well off, he had been esteemed, and now this: nameless, homeless, an alien, an intruder”.

But it is not the principal point of the story. His intention, as it is in The Maze, is not to depict or predict history, but to calmly assess the damage provoked by expectations, the pathos elicited by passion deferred, and the sheer meaningless of life when context and hinterland are removed. “A person had no fixed qualities. It all depended on the circumstances”.

Karnezis, as a superb storyteller, leaves us with not one, but two, vicious twists of his plot in the last chapter. And he has the ability to catch us unawares in the self-reflections of his characters. The circus owner, reduced to absolutely nothing by the death of his elephant, decides “You could not avoid making bad decisions if you wanted to be in charge of your own life” – a reassuring view for some, no doubt. Meanwhile his wife, having sex with Mokdad, “felt neither unease nor passion, but the calm conviction that she was setting herself free from grief”. She was, Karnezis tells us, “easy to hurt, like everyone, an open wound”. It is the fact that Karnezis can tell us this and yet reconcile us to those wounds and that woundedness, that marks him as both a sensitive and an honest observer. This is a fine addition to Karnezis’s already impressive list.