The Irish at Arnhem: a bridge too far 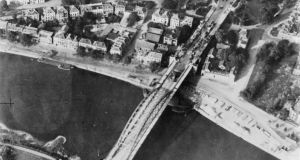 The bridge at Arnhem

“I think we may be going a bridge too far.”
Lt Gen Frederick Browning to Field Marshal Bernard Montgomery

This year marks the 75th anniversary of the battle for the bridge at Arnhem – of such strategic importance that both sides were desperate to hold it. This was a pivotal moment in the final phase of the war in Europe. The intense conflict was famously depicted in the epic war movie A Bridge Too Far, but more significantly its outcome thwarted Allied plans to end the war by Christmas 1944. My new book, A Bloody Week, looks at the Irish at Arnhem.

After D-Day, the collapse of German resistance in France and Belgium meant finally the end of the war was within sight. Operation Market Garden was designed to bring that quickly within reach. The Allies’ plan was imaginative, daring and simple. Nothing like it had ever been attempted before – 35,000 airborne troops were to be flown from England and dropped behind enemy lines. Their mission: to seize and hold nine bridges across the Rhine. This would allow Allied forces advance 64 miles into enemy territory and establish a bridge-head from where they could bring the conflict to a speedy end. It was the first time airborne troops were to be used by the Allies on such a massive scale.

The plan was the brainchild of Field Marshal Bernard Law Montgomery who had deep family roots in Donegal and Derry. Had it worked it could have ended the second World War before Christmas 1944, potentially saving tens of thousands of lives as a result. Surprise and speed were crucial to its success. It was opportune to try – the prize a secure start line to strike into Germany itself.

As with the June landings in France, there were a huge number of Irish personnel involved. But the operation was a gigantic gamble – a desperately risky undertaking at best – and it ended in disaster. For nine days the airborne men held out against overwhelming odds in one of the most fiercely fought battles of the second World War.

“Charge!” came the shout and, as one, 150 airborne troops emerged over the rim of the large natural crater with bayonets fixed on their rifles, yelling, roaring, bawling, running straight at their disbelieving German attackers. In a scene more reminiscent of an old-style “over the top” bayonet charge from the trench warfare of the Great War, it was all the more remarkable because it worked.

It was 4th Parachute Brigade’s Brig Gen John “Shan” Hackett, whose Irish father came from Tipperary, who ordered and led the desperate manoeuvre – given the near hopeless situation his troops found themselves in. Breaking cover, running bald-headed with weapons blazing, yelling and screaming, they made their seemingly suicidal breakout. They charged at the astonished Germans who were so shocked that they scattered. The paratroopers kept running until they reached the safety of positions newly created by the 1st British Airborne Division around the Hartenstein Hotel. The naturally occurring undulation in the woods from where they had sprung was thereafter known as Hackett’s Hollow.

One day earlier, four battalions – the 1st, 3rd and 11th Parachute Battalions and the 2nd Battalion of the South Staffordshires’ Air Landing Brigade) had sought to advance through Arnhem town. Their mission to reinforce a “seize and hold” operation of the bridge proved unsuccessful. It also tragically saw them decimated to the extent they ceased to exist as viable individual units. The 2nd Batallion had fought like demons, but their capacity to hold out much longer was already overstretched. The Germans were in control of the town and – with reinforcements constantly arriving – were exerting ever mounting pressure.

As Hackett had done in the Hollow, 4th Parachute Brigade Maj GenUrquhart hoped to do so now at Oosterbeek and form a defensive perimeter in the centre of which was his divisional headquarters at the Hartenstein Hotel by assembling the remnants of his Division into a thumb- or horseshoe-shaped pocket at Oosterbeek with its base on the Lower Rhine. With the arrival of the remaining elements of Hackett’s bayonet charging troops, Urquhart divided the defensive perimeter into eastern and western sectors commanded by Hackett and Hicks respectively.

Defending its southern arc was Lonsdale Force, a cobbled together mixture of paratroopers and airborne South Staffs under Major Dickie Lonsdale, who is believed to have been born in Manorhamilton, Co Cavan. Lonsdale had been wounded in the hand by flak shrapnel just before jumping at Arnhem and was twice more hit so his appearance in many bloodied bandages was somewhat fearsome. He set up his headquarters near Oosterbeek Church and is renowned for his energetic encouragement of those around him, particularly having ordered his men into Oosterbeek church when he appeared on the pulpit and addressed them stirringly with one arm in a bloodstained sling, a bandaged leg and a further bloodstained bandage wrapped around his head with the words, “We’ve fought the Germans in North Africa, Sicily and Italy. They were not good enough for us then and they are bloody well not good enough for us now!”

A ring of steel was now placed around the encircled British Oosterbeek perimeter about four miles distant from the bridge and so began another phase of the battle. With sniping and mortar barrages constant, these were added to by intermittent infantry and tank attacks. With the fight for the bridge and their hopes of success there ebbing away by the hour, the British Airborne Division at Arnhem in the Oosterbeek perimeter were now fighting a different battle – fighting for time so that 30th Corps would arrive and relieve them.

All the while casualties mounted; among those killed in action were Land Corporal Patrick Harrington, from Durrus, Co Cork, 11th Parachute Battalion; Maj Houston James, from Derry, Headquarter Company, 3rd Parachute Battalion and Sergeant John Hunter, Co Antrim, Platoon Sergeant of 10 Platoon A Company, 1st Parachute Battalion. Tens of others from Ireland, North and South, were wounded and captured.

Over nine days , the Allied forces desperately defended the north side of the Arnhem road bridge and the ever-shrinking perimeter in the western suburb of Oosterbeek. They bravely fought a highly contested battle far fiercer and more bitter than ever imagined. You cannot fight tanks and armoured vehicles with rifles and machine-guns, but for the most part they had to and did. By holding out with obstinate, unyielding, bloody-minded stubbornness, their wilful tenaciousness gave 30th Corps every opportunity to link up and consolidate the bridgehead. They arrived agonisingly close, with the Irish Guards to the forefront, but “time and space” denied them their victory.
Dan Harvey is a retired Irish Army officer. A Bloody Week: The Irish at Arnhem is published by Merrion Press