‘Lyra and I compared notes about our books. I lived to see my title in print, she did not’ 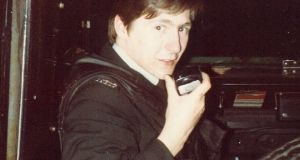 Sam Thompson inside an armoured landrover

It seems barely credible that less than a month ago I was comparing notes with a talented young writer on the release of our respective books. We were both excited about getting into print. She had a two-book deal with the prestigious publishing house Faber & Faber while I had signed a deal with the respected Irish company Mercier Press. I have lived to see my title in print; she did not.

Only a matter of hours after we exchanged messages, she lay dying in a Derry street, cut down by bullets from a masked gunman. I am speaking of course, about Lyra McKee. Her death is a cruel reminder of a past that, like a lingering virus, refuses to go entirely way.

Her encouragement persuaded me to go on after my own novel Nights in Armour, had been rebuffed by numerous publishers. She was convinced Troubles fiction was coming back into vogue so, despite what I had been told, I took her at her word, got over my disappointment and tried a few more publishers.

My novel is unusual in that it is having a second lease of life after having briefly seen the light of day in late 1993 under the pen name, Blair McMahon. It was published by David Trimble before he became leader of UUP. He felt it encompassed the emotional side of the Troubles. I don’t know how much it affected him but I sometimes joke I’m indirectly responsible for the peace process. The second edition has undergone a rewrite with the benefit of an editorial team. The story and plot are unchanged, but it should now be a better, more professional read.

Over the past few years the curiosity of the “ceasefire generation” and a growing trivialisation of the conflict through the deliberately provocative use of flags, emblems and songs, convinced me people need to see the Troubles for the venomous, heart-breaking times they really were. Few former protagonists of whatever stripe want to relive them.

Most Troubles fiction has been from the point of view of the British army or more usually the IRA. I get that. I understand how the perceived underdog is more natural storytelling material and if anyone has published books from that angle, good luck to them. Every writer, even the Stephen Kings and JK Rowlings of this world, know how hard it is to get into print – you take your chance when it comes to you.

I always had an interest in writing. I remember as a child trying to write a book but inevitably, I got bored after a few pages or so as seven-year-olds tend to do. First-time writers are advised to write about what they know and what I knew about as a young man was working as a uniformed constable in the RUC.

I was still a teenager when Bobby Sands died and in Border and “hard” (mostly republican) areas the vast majority of patrol officers were in their teens or early twenties. Someone at 30 would have been considered an old man.

The book, though fiction, was inevitably influenced by what was going on at the time, what I heard and what I saw. Real incidents and killings aren’t depicted – the hunger strike is the background noise against which the book’s events take place but the important thing in any work of fiction is that it seems real or, if not real, at least plausible.

I have been pleasantly surprised at the goodwill extended to both me and the book from republicans. Confident in their own story, they have no objection to others telling theirs. Séan Murray, the director of Unquiet Graves and, I suspect, no fan of the RUC, told me it was important for each community to get their story out.

The Belfast Telegraph and U105 covered the book and were intrigued that it received a favourable review from former Sinn Féin publicity director Danny Morrison, (an interesting take in itself as it assumes one writer won’t entertain the work of another, purely on the basis of the author or subject). I welcome his review. Every writer wants to reach as wide an audience as possible and I hope it opens the book to an audience who might otherwise dismiss it out of hand.

Republicans and nationalists may be curious to see the events they remember and were involved in from “the other side of the hill”, while former colleagues and unionists may feel vindicated to finally see a story of the Troubles from a viewpoint they are sympathetic to.

As Morrison’s review said, the book does “not read as propaganda”, in my view a correct judgement because it was not written as such. If it had been, it would have lacked any credibility. I tried to inject balance where possible, and explored how young people in particular, living in a toxic environment, could be seduced by the apparent solution of violence. The focus, though, is on its RUC officers. The shadowy world of informers and collusion, a word I had never heard used at the time of writing (1985/86), is also there.

Almost 40 years on, the more I reflect on those things, the more I am convinced that what we believe and what we become is largely determined by the circumstances of our birth. Many of the historical issues surrounding the RUC were simply irrelevant to most of us who joined it. The force seemed no more controversial than it would be for a young man from Dublin to join An Garda Síochána today.

Today, I take a broader view, an interest in history (I have also written as yet unpublished history of the second World War) tells me we all get carried along by historical forces we can barely understand and that it is absurd to view people as eternal enemies because they were born (in my case) a hundred yards down the street. I am now part of an informal reconciliation group of “former enemies” who meet occasionally, simply to put aside the poisonous relations of the past. If we have one thing in common, it is a mutual feeling of “never again” for regardless of the cause or uniform of the killer or victim, the resulting blood and tears are pretty much the same.

The political scene in Northern Ireland may seem sterile and hopeless now, but believe me, it was much worse in 1981. For those of you who weren’t around or who can’t remember, let me take you there for a few hours. You’ll be glad to leave it behind.
Sam Thompson was born and grew up in the loyalist Shankill and Ballysillan areas of west and north Belfast. He joined the RUC in 1979, serving in Armagh City, west and central Belfast, Dungannon and in several posts in headquarters before retiring in 2008. He briefly served alongside the now Garda Commissioner Drew Harris in 1986 and was one of the first PSNI officers to complete a secondment with An Garda Síochána in 2007

The Boys in the Band is theatrical, dated and utterly fabulous
5