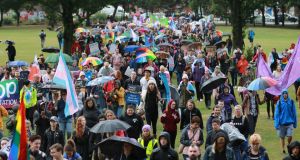 John Boyne, in a recent Irish Times article entitled Why I support trans rights but reject the word ‘cis’, states that he doesn’t consider himself a cis man. “I don’t consider myself a cis man; I consider myself a man.” It seems odd that, having written a book about the transgender experience and, now, an article, that he would go out of his way to object to this adjective. I presume he has no objection to being called a gay man or a white man. Why, then, this objection to being called a “cis man”?

The word ‘cis’ is short for ‘cisgender’, the dictionary definition of which is ‘denoting or relating to a person whose sense of personal identity and gender corresponds with their birth sex.’ Seem perfectly reasonable, right?

It is, basically, the opposite of transgender. I am a trans woman. Trans is just one of the adjectives that can be used to describe me. I am also a white woman, a fat woman, a gay woman, a funny woman (I hope), a kind woman (I also hope). I am all of these things and I am so much more. I am not, however, a cis woman for the very reason that I am, as already mentioned, transgender. One cannot be both.

Saying a trans woman was born a boy is problematic. I wasn’t born a boy. I was born me. I’ve always been me

The only time I refer to people as being cis is when discussing trans issues. This is to distinguish them from transgender and non-binary people. In the same way if I were involved in a discussion about, say, Black Lives Matter, I would point out that I am a white person and I am speaking from a position of white privilege. Boyne, whether he likes it or not, is a cis man speaking from a position of cis privilege. In fact, the whole article reeks of that privilege.

Take, for example, this sentence from the article: “However, a friend of mine, born a boy, came out as transgender in his early 20s…” Saying a trans woman was born a boy is problematic. I wasn’t born a boy. I was born me. I’ve always been me. I was assigned male at birth but I wasn’t born a boy. A doctor or a midwife or a nurse took one look between my legs and decided I was male. No one asked me and I wasted the best part of my life trying to conform to that assignation. Note, also, the misgendering in that sentence. Boyne uses the word “his” instead of “her”. This is very troubling, not least for the fact that the writer himself is a member of the LGBT+ community. This is basic stuff and if he is getting this wrong I have to wonder what he’s getting wrong in his book. I should point out that I haven’t read his new book or, indeed, any of his books.

It is entirely possible for an LGBT+ person to be transphobic. Thought you should know

Also in the article he mentions former tennis star Martina Navratilova. He rightly says that she has been a fearless advocate for gay rights over many decades. No one is disputing that. However, he objects to Navratilova being labelled transphobic for questioning “where trans women should compete in professional sports”. He omits to point out that the reason she was labelled transphobic is that she argued that allowing transgender women to compete in women’s sporting tournaments was “insane and cheating”, comments for which she subsequently partially apologised.

Boyne, however, misses the point and says that “for anyone to suggest that a person of her courage is phobic about anything is to deliberately ignore her history”. This, quite frankly, is bull. No one is disputing her courage and many of us are aware of her history. It is because of that history that her comments were so disappointing and hurtful to many in the trans community. They were, I’m sorry to say, transphobic. It is entirely possible for an LGBT+ person to be transphobic. Thought you should know.

Many of us are fighting for our lives, for our very right to exist and here we are being debated out of that existence

Boyne goes on to say that “there is no safe place for people to debate these topics without being branded an enemy”. Well, boo-hoo. I don’t want there to be a safe place for people to debate these topics because, here’s the thing, John, we are not a debate. I am tired of my life and the lives of my community being put up for the debate: Which bathrooms should we use? Which prisons should we be placed in? Which hospital wards? Which changing rooms? Should we be allowed to play sport? Each of these questions has the cumulative effect of pushing transgender people more and more towards the periphery of society. The “just asking questions” brigade are just making difficult lives for an already marginalised minority that much more difficult.

Towards the end of the article he again mentions that this is a debate and that there are two sides. There’s that cis privilege again. It’s only ever a debate when you think there’s a side to be argued against. It says that “there are so few nuances, so few shades of grey, that it feels like it has to be all or nothing. That you’re either an ally or an antagonist.”

Yes, it does feel like that – especially when you’re under attack. Trans people don’t have the luxury to deal with nuances or shades of grey. Many of us are fighting for our lives, for our very right to exist and here we are being debated out of that existence. Sure, that might sound dramatic and emotive and I speak from a position of huge privilege. I am a white trans woman with a good job. I have a roof over my head and I can put food on my table. I have access to healthcare and hormone treatment. The difference is that I recognise that privilege and it’s not going to stop me from fighting for my community and those that don’t have that privilege.

Whether Boyne likes it or not, he is a cis man and he has cis privilege. It’s just a pity he can’t seem to recognise it.

Aoife Martin is a director of Transgender Equality Network Ireland