A reflection on borders in verse by Tim O'Grady 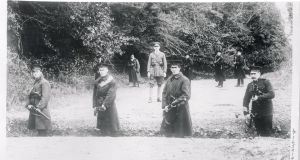 After Reading an Article by Pankaj Mishra

When the British wanted to divide India
They called on a myopic barrister named Cyril Radcliffe
Who’d never been east of Paris.
He hadn’t much time, WH Auden said,
To separate “two people fanatically at odds,
With different diets and incompatible gods”.
He stayed in his villa under police guard,
Studying out-of-date statistics and inaccurate maps;
Then he drew his lines
And hoped for the best
And sailed home to England.

It was random, it was crude,
India reeled under the wound.
The lines sundered hinterland from port,
Lover from lover.
The greatest refugee population in world history was raised.
Millions died, thousands were raped,
As wars began that continue to this day.
As for Cyril Radcliffe, Auden reports,
Return to India he would not
For fear that he’d be shot.
The following year they made him a viscount.

Ireland, first and last in the imperial story,
Got its own border half a century earlier.
It loops and bulges and staggers
Like a drunk
Or a plotline full of afterthoughts,
Slicing through towns and bisecting cottages
In order to enclose the largest area Unionism could dominate,
A gerrymander that bestowed power
On those who had not earned it.

The Cyril Radcliffes of their time
Told the new Irish government,
Don’t worry, it can’t last,
The day will come
When it will fall into your hands
Like ripened fruit.

It wasn’t the first promise made and broken
And wouldn’t be the last.
Border roads were dynamited,
Watch towers went up,
Helicopters hovered overhead.
War raged again
And two of the most inward-looking
And inert societies in Europe
Grew up to either side of it,
Poor, parochial, Church-dominated Eire.
And the paranoid and cruel apartheid regime in the North.
Only the smugglers seemed to benefit.

Partition tends to fail over time
And is itself a failure
To face the problem
Of how to live together.
It is an act of despair,
Or more likely of indolence.
Fences make good neighbours, it is said,
But you can talk through a fence,
Pass over a slice of pie.
You wouldn’t run it through your living-room
Or patrol it with an army.

Two hundred years ago Georg Friedrich Hegel
Revived the dialectic of Zeno and Socrates,
Thesis, antithesis, synthesis,
Whereby our view of reality
Advances through a continuous process
Of correction of previous errors,
Each arising from an undue abstraction,
The misconstruing of something fixed and limited
For the whole picture.
Such it was to either side of the border,
Two undue abstractions,
Fixed and limited,
Growing ever more rigid
As they averted their eyes from one another.
It was the old story, divide and rule,
But could have been otherwise,
The border lifted from the land,
The two sides facing each other,
Thesis and antithesis,
Planter and native,
Calling each other out,
Reducing the other’s undue abstractions
By the amount they removed of their own.

And then, mirabile dictu,
One Good Friday morning
The border began slowly to evaporate before our eyes.
The watchtowers came down,
The army went home.
Farmers could cross the road to their own fields
Without a twenty-mile detour to a checkpoint.
People moved as the wind blew
Or the spirit took.
Ian Paisley had a laugh with Martin McGuinness
And politicians who thought each other
From rival galaxies
Sat down together
To talk about drains.
A borderless Ireland
Became less a romantic aspiration,
Or a nightmare to oppose with blood and iron,
But rather a synthesis
Arrived at
Through the banal catalytics of pragmatism.

Meanwhile, over in England,
David Cameron had an idea
To cauterize a wound in the Conservative Party.
We all know what happened,
Or didn’t happen,
Next.

And the border hove back into view,
And along with it Cyril Radcliffe
In reincarnated form,
The top-hatted Rees-Mogg and Bullingdon Club Johnson,
Calling Ireland to heel.
We’re on our way, don’t you see?
We’re marching towards our destiny.
You’re of no account,
So do what it takes
To get us back our DUP votes.

The Democratic Unionist Party,
Their name a tripartite oxymoron,
“the political wing of the seventeenth century” as someone called them,
Their mandate starting at thirty per cent in the North
And declining through the jurisdictions
To one per cent of the UK,
Around whose centuries-long belligerent and deafening monosyllabic No
We must always arrange ourselves,
There they are sprucing up their wardrobes and their factotum strut,
Power brokers, loyal subjects,
But fearful of looking too long in the mirror
Lest they see what they know is there –
The forlorn figure of the unrequited lover,
Useful when no one else is around,
But expendable when they are.
Will someone finally ask them to show their hand?

Trust us, said Mountbatten and Radcliffe,
Trust us, say May and Liam Fox,
You’ve already said you want no hard border,
Well neither do we.
So, snap, what, between friends,
Is the need for a guarantee?
Well if that’s the case, we say,
What fear have you of offering it?

There are many kinds of border,
Between night and day,
Old and young,
Wealth and poverty.
A window is a border and so is skin,
It tells us where we end,
It keeps out and holds in.
But it also invites,
Says come here to me now,
It’s not far.
It’s only a matter of how you look at it.

This poem was written for the Imagining Ireland event which took place at the Barbican in London on January 30th. Timothy O'Grady's works include (with Kenneth Griffith)  Curious Journey: An Oral History of Ireland's Unfinished Revolution (1982), and the novels Motherland (1989), winner of the David Higham award for the best first novel, and I Could Read the Sky (1997), which won the Encore award for best second novel

‘Guernica’: 80 years on still a stark reminder of war’s horror
2