‘I believed it’: John Banville was told he won 2019 Nobel Prize in hoax call 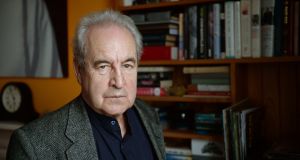 Organisers of the Nobel Prize in Literature are investigating a hoax phone call informing the Irish writer John Banville (pictured) that he was to receive this year’s award. File photograph: Dara Mac Dónaill/The Irish Times

The organisers of the Nobel Prize for Literature are investigating a hoax phone call informing the Irish author John Banville that he was to receive this year’s award.

Banville received a call, which appeared to come from the Swedish Academy’s offices, telling him he was one of two winners about half an hour before Thursday’s ceremony in Stockholm announcing the recipients of this year’s prize.

However, shortly after the actual recipients were announced he received a voicemail explaining that there had been a last-minute disagreement among the decision makers.

In the voicemail, a man claiming to be Mats Malm, permanent secretary of the Swedish Academy, explained various internal tensions which he claimed ultimately led to the prize being withdrawn from Banville and given to somebody else.

The Booker-Prize-winning author said he initially believed the voice message to be real. When he attempted to return the calls he reached the offices of the Swedish Academy, but could not get through.

“I believed it. The call came from Stockholm, why would I not believe it?” Banville told The Irish Times.

For some 45 minutes he understood his lifetime body of work was to be recognised by the Academy, seeing him follow in the footsteps of literary greats including WB Yeats, George Bernard Shaw and William Faulkner.

However, it later emerged that the prize was being given to Austrian writer Peter Handke and Polish author Olga Tokarczuk.

Banville said he believes the calls were part of a hoax more than likely aimed at discrediting the Academy, an organisation which is overcoming recent scandal.

“I was disappointed of course. When you are phoned up and told you got the Nobel Prize you are not thinking straight,” he said.

In response to joint reporting on the issue by The Irish Times and Aftonbladet in Sweden, senior members of the Academy denied they had made any contact with Banville or that any error or confusion had arisen.

“Nobody from the Academy has made such a call. It sounds like a bad joke,” said Mr Malm. “It has happened before. When I talked with the publisher of Olga Tokarczuk I actually had to prove that I was who I said I was before I was able to talk to her.”

Mr Malm was also likely to have been in the press conference when the voicemail was recorded.

Per Wästberg, another Academy member, also suspected it was a “joke”.

He said: “Nobody from the Academy has made a mistake. We got hold of the laureates immediately.”

What remains unclear is how the Academy’s phone numbers appeared on Banville’s phone – and whether the calls were actually made from its offices. Mr Malm said they would “look into” the matter.

The Academy, which has since been in touch with Banville, has been the subject of scandal, internal divisions and tensions in recent years.

This year was the first time in the award’s 118-year history that two literature prizes have been given simultaneously. The move follows sexual assault allegations linked to and high-profile resignations from the Swedish Academy in 2017, which led to the cancellation of last year’s prize announcement.

Controversy continues to surround the awards. Handke, one of the 2019 recipients, has been criticised for his portrayal of Serbia as a victim during the Balkan Wars of the 1990s and for attending the funeral of its former president Slobodan Milosevic.

In 2016, musician Bob Dylan was awarded the prize, which led to accusations of dumbing down. In 1989, three members of the Academy resigned in protest at its refusal to denounce the fatwa imposed on Salman Rushdie following publication of The Satanic Verses.

Its past controversies aside, the award would have capped a distinguished career for Banville. A former journalist with The Irish Times, his first book was a short-story collection called Long Lankin (1970). He went on to publish numerous novels and other works.

He was the recipient of the 2005 Booker Prize, the 1976 James Tait Black Memorial Prize, the 2011 Franz Kafka Prize, the 2013 Austrian State Prize for European Literature and the 2014 Prince of Asturias Award for Literature.

Elected a fellow of the Royal Society of Literature in 2007, he was made a Cavaliere of the Ordine della Stella d’Italia – essentially granting him a knighthood – by Italy in 2017.