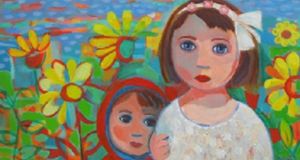 SIRENS Part III: Celina Muldoon
Kevin Kavanagh Gallery, Chancery Lane, Dublin. Until August 31st
Celina Muldoon’s Sirens project began with an exploration into accounts of mythological beings in the vicinity of her home in Co Donegal and, via the involvement of young collaborators, delved into “identity, isolation and a sense of place” on the periphery. Performance-based (live, Sat August 31st, 25mins), the work also involves installation, text (Sue Rainsford) and music (Keith Mannion).

Raphael Hynes: Still life paintings
Séeamus Ennis Arts Centre, Naul, Co Dublin Until September 30th
Drogheda-born Hynes studied at NCAD, though he paints still-life subjects in a precise, cool form of realism that recalls William Coldstream and Euan Uglow, or John Long – strong on measurement, with carefully calculated colour and tonal values. There is a poise and serenity to his work.

The Colours of Wonder and Innocence: Marja van Kampen
Signal Arts Centre, Bray, Co Wicklow Until September 1st
Van Kampen’s colourful paintings address the theme of childhood, drawing on her own memories and observations – the latter including visits to India – and her personal archive, including family photographs, in both colour and black-and-white, of herself and her sister.