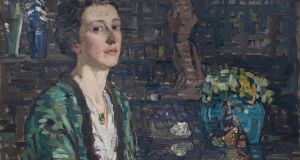 Mary Swanzy (1882-1978) was born in Dublin, the second of three sisters. Her family lived on Merrion Square. Her parents, Sir Henry Rosborough Swanzy, an ophthalmic surgeon who played a central role in establishing the Royal Victoria Eye and Ear Hospital; and Mary (nee Denham), were, as Julian Campbell put it in his 1986 study of the painter, “of the professional Protestant classes who were so influential in that generation”.

Mary later learned that she had been a delicate infant, to the extent that her survival was initially doubted. But survive she did, and went on to attend Alexandra College, then as now known for fostering a spirit of intellectual and creative ambition in its students. Although it was Victorian in its strictness, she described her childhood as “a gift from heaven”.

She was fond of the theatre and attended art classes on Saturdays. In her mid-teens she was sent to the Lycée in Versailles, then Freiburg in Germany, emerging with a command of both French and German. Back in Dublin she took further art classes with May Manning, a contemporary of Sarah Purser. John Butler Yeats played a role in the classes, and Swanzy held him in high regard. She also became enduringly close to Purser who, with Manning, encouraged her to study in Paris, which she did around 1905.

Her life in Paris, while agreeable, did not resemble the bohemian myth. Paris was, at the time, the centre of the western art world and a magnet for artists of many nationalities. Usually Swanzy was in bed by 8pm each evening and in the studio by 7.45am each morning, working intensively from the life model. By all accounts she was straight-laced, conscientious and hardworking, to a degree that makes her sound a bit one-dimensional.

After a spell back home, she paid a return visit to study in Paris in 1906. Campbell notes Joyce’s friend Con Curran’s mention of her as being a student of painter and teacher Lucien Simon, which makes sense. She attended one of Gertrude Stein’s Saturday soirées. Stein’s house was a concentrated gallery of contemporary and recent art in Paris. Swanzy subsequently expressed her admiration for Picasso’s portrait of Stein.

Her father hoped she would be a portrait painter, and she did give it a try but in the end opted not to. Imma cites her unhappiness with the fact that men tended to want to be painted by men. While some of her portraits impart a sense that she is not fully engaged, nonetheless they do show real flair and genuine connection with the sitter, more than enough to indicate it might have been a worthwhile course to pursue. In any case, a consistent exhibitor, she was becoming increasingly well established and respected, in Ireland and eventually in Paris.

Within the space of a few years prior to the first World War, both her parents died. The loss left her sad and unsettled, but gave her the luxury of financial independence. Her immediate impulse was to travel, including a visit to Italy and, over the years, regular stays in Saint-Tropez. In Dublin she shared a studio with painter Clare Marsh for a time, and had a major exhibition in 1919.

Swanzy was not politically engaged. As it happened, she was in Dublin in April 1916. In a much quoted radio interview with Andy O’Mahony in 1977, on being asked about her political stance during a turbulent period in Irish history, from the Easter Rising through the War of Independence and the Civil War, she remarked that while she was in favour of freedom on principle, she was against revolutions in general. One feels she greatly valued stability above almost anything.

One day in March 1920, a masked group of RIC men entered the house of Thomas Mac Curtain, lord mayor of Cork, and killed him. A second cousin of Swanzy’s, Oswald Swanzy, was named at the inquest as the detective inspector in charge of the group. He was whisked away from Cork for fear of reprisal and stationed in Lisburn.

However, Michael Collins’s intelligence network, which included an RIC sergeant, soon located him and he was shot dead in Lisburn that August. His death triggered a wave of loyalist riots and sectarian violence in which more than 30 people died. It is not clear to what extent Swanzy was affected by these events, but the timing does coincide with the beginning of an extended period of travel for her, and it is telling that, following several years spent abroad, she did not return to Dublin but settled in London for the rest of her life (with the exception of three years during the second World War spent with her sister in Dublin).

In any case, initially she joined her sister who was engaged in relief work with the Protestant mission in eastern Europe. In Czechoslovakia she sketched a great deal, picturing local life – markets, traditional public events, the mountainous landscape – with crayon, often working on flimsy sheets of mission notepaper. Worked up into paintings and exhibited back at home, these drawings became bold Fauvist compositions. Swanzy immediately organised and embarked on a more ambitious journey still, travelling to stay with an uncle, a sugar merchant in Honolulu, via Canada and the United States.

The setting was stimulating for her. She wrote to Purser of the “perfect climate and beauty … I feel a draw towards tropical scenes”. In Honolulu, and during a subsequent visit to Samoa, her painting seemed to click into gear and she made probably the most accomplished work of her life. The best of these paintings are in public collections and they shine in the exhibition.

Although she does not seem to have visited Tahiti, mention of Gauguin is unavoidable. Imma’s commentary – rather puritanically and fancifully – compares her wholesome vision to his tendency to sexualise the women of the islands, praising her “feminist and liberal view of the lives of these people”, projecting current PC values on to her in retrospect. Gauguin was certainly a difficult, even disreputable person, and his behaviour was in some respects indefensible, but he did manage to make a substantial amount of great art. Equally, in Swanzy’s case, it is fair to say that the tropics unleashed in her an enriching dimension of sensuality that is otherwise relatively lacking in a great deal of her work.

When she did settle in London, via a stay in France when she seemed slightly adrift, she embarked on a cycle of experimentation in her painting that saw her draw on many styles and movements. She has been described as the first Irish cubist, but her take on cubism was cautiously selective (with a nod to the Orphism of Sonia Terk Delaunay and her husband, Robert Delaunay, perhaps, and to André Lhote’s rather mechanical approach, which had such a lasting impact on a generation of Irish modernist artists through his role as teacher).

Looking at her work now, it appears to most immediately echo contemporary trends in British art and design that come under the general heading art of the Machine Age. More often then not, Swanzy’s notionally cubist or futurist compositions feature a stylised but basically naturalistic motif, nestled within an arrangement of concentric curvilinear patterning. Other groups of paintings veer towards expressionism and surrealism, using caricaturish distortion, often with allegorical, moralistic intent. They come across as arch and awkward.

Even Swanzy’s most sympathetic observers baulked. Brian Fallon wrote of his reservations about this “fey, elfin whimsy of a fantasy world”. Campbell referred to the “prim, Edwardian feeling” that shows through the veneer of modernism. He quotes Terence de Vere White, who spoke perceptively of Swanzy as a “strict, upper-class Protestant lady, I don’t think she ever quite gave vent to her feelings … her paintings have a sort of power not so much because of what she says in them but because of what she suppresses.” That remains a fair assessment.

Netflix: 10 of the best new shows and films to watch in April
8