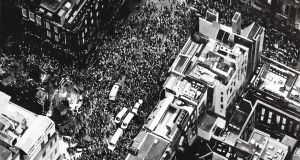 Protest Crowd, London is one of a series of works by Joy Gerrard based on crowds in urban spaces. How was it done? Gerrard’s images are sourced in photographic documentation. That might be benign, as in media coverage, but there is also the more ominous example of surveillance imagery. Moving on from representations of extreme weather events, she had been considering the mass movement of crowds in urban spaces almost in terms of fluid dynamics, as though the individuals fused together – as crowds do in many ways – to become a mass, flowing around incidental obstacles, channelled and redirected by larger structures. She found that drawing was an effective means of doing what she wanted, though she also made a film, Shot Crowd. There is a nearly abstract, calligraphic quality to the myriad distinct marks that recalls Louis le Brocquy’s ink drawings for the Táin, in that each mark corresponds to an individual.

They were configured as a response to Brexit given that the two galleries were initiated as a cross-Border partnership to provide a cultural resource for the Border region.

It is. Gerrard was born in Ireland, studied at the Crawford College of Art in Cork, NCAD and the Royal College of Art, London. She moves between London and Belfast. She has been exploring and developing this general series since about 2006. She was working towards an exhibition at the Millennium Court Arts Centre in Portadown in 2010 titled Space, Fear and the Multitude. Pretty much as she progressed, social media – especially via the exponential growth of Facebook – became an active element in mass gatherings. She did not concentrate exclusively on protest. Worship, including pilgrims at Mecca and people seeking refuge, such as those displaced by Hurricane Katrina, have also featured.

She could not have known – no one did, really – that a new chapter in the history of mass gatherings was beginning, but since the advent of the Arab Spring in 2010, it has been hard to keep pace with the development of mass protest. She has actively addressed, for example, the Occupy Movement, Black Lives Matter, protests against the Trump presidency and, of course, Brexit. What next? It’s hard to know, but the evidence is that she will have her work cut out for her for some time to come.