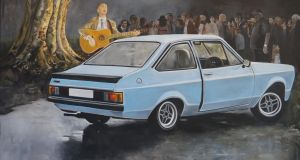 Gerry Davis’s 'Wedding Car' makes sense in that every element is easily legible, visually, but it is also a little odd

What is it?
Wedding Car is a painting by Gerry Davis.

How was it done?
Davis is in many respects a straightforward representational painter. His paintings feature readily understandable images of the world around him. However, his temperament, allied to his considerable natural facility, had the effect of making him question what he depicts and why. Rather than following the line of least resistance and adhering to pictorial conventions, he is suspicious of convention, uneasy about the overlap between painting and image. Wedding Car makes sense in that every element is easily legible, visually, but it is also a little odd. It implies a substantial back-story but does little – apart perhaps from the title clue – to elaborate it.

Where can I see it?
Wedding Car is included in Procession, Davis’s solo exhibition of new work at the Galway Arts Centre, (47 Dominick St, Galway, until February 8th, galwayartscentre.ie)

Is it a typical work by the artist?
Typical up to a point given that it does feature some recent developments in his work, but then he is still relatively young – he was born in Cahir, Co Tipperary, in 1985. He studied at the Limerick School of Art and Design (LSAD) and was a founder member of Wickham St Studios there. In 2016, he won the Hennessy Portrait Prize – now the Zurich Portrait Prize – at the National Gallery of Ireland (NGI). His prize commission, a portrait of Kilkenny hurler Henry Shefflin, now hangs in the NGI as part of the portrait collection.  He has remarked that, as far back as secondary school, he was interested in digitally manipulating images to produce surreal effects. So it was sort of logical for him to go on to study software development at Limerick Institute of Technology. He had the coolness of nerve, when he realised he’d made a mistake, to quit and take a portfolio course that won him a place at LSAD.

There, what impressed him about painting was the physicality of the medium, as opposed to the virtual, immaterial nature of digital imagery. In time he moved towards what he terms documentation painting. In terms of documentation, he has most notably made a series of studio paintings, accurate, deadpan representations of his immediate working environments. There’s a real flicker of connection here with other contemporary representational Irish painters including Kevin Cosgrove, Mairead  O’hEocha, Stephanie Deady, and Colin Martin.  Davis expressed a similar sentiment about portraiture: it’s documentation in that the subject is a given, you just set about painting it. More recently, it is as if he has revisited his early interest in manipulated representation, via the medium of paint. The result is a species of magic realism, a realism that allows the subjectivity of memory, the fantasy of dreams, the imagined and speculative. There is a documentary aspect, a substantial autobiographical strand – including in Wedding Car. Who knows where this line of development will lead him next, but lead him it will as for him the point of painting is wrapped up in the process of painting, never an end result.