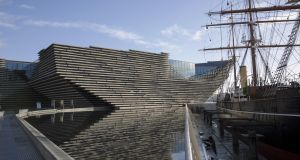 The V&A in Dundee which was designed by Japanese architect, Kengo Kuma. Photograph: Getty Images

Scotland’s first design museum opened in September in a stunning building designed by Japanese architect Kengo Kuma that looks like sea stacks rising up out of the city’s waterfront. Fittingly, given its location, it main current exhibition looks at ocean liner style from the golden age of travel. April brings it right back to the present with an exhibition looking at videogames, robots and the future of design.

The Scottish Design Galleries at its heart features 300 exhibits from the V&A’s collections of Scottish design, as well as from museums and private collections from across Scotland and the world. The showstopper here is the magnificent Charles Rennie Mackintosh Oak Room, the restoration of a Glasgow tea room he designed in 1907 which had been packed away in storage by the council for more than 50 years.

Amid a sea of glass and concrete skyscrapers, the new public space at Tai Kwun, Hong Kong’s Centre for Heritage and Arts, gives visitors space to breathe in a crowded city, thanks to the transformation of a former police station. Undertaken by the Hong Kong Jockey Club, the elegant new development opened last year with a packed schedule of more than 30 exhibitions, shows, performances and cultural events.

The former prison yard and parade grounds are put to work too, hosting theatre, music, dance, film and workshops – including soothing gems such as how to build a terrarium. Open to the public from 11am to 11pm daily.

To see every item in the Louvre in Paris would famously take 100 full days, at a speed-seeing rate of 30 seconds per piece. Who needs the stress? Take a leisurely turn instead around its newest outpost, in Abu Dhabi.

Not in any way a copy of the French Louvre, as its patrons are keen to point out, but very much a museum with its own entity, you might think of it as a licensing deal representing hundreds of millions of dollars on the French side and an opportunity to pivot from oil on the Emirati side.

No matter, it opened two years ago and features loans from France – to be rotated on a 10 year basis – as well as the emirate’s own expanding collection. Visitors are guided through a chronological and theme-based display, across different periods and civilisations. Highlights include one of the earliest large scale representations of humankind, an 8,000 year old plaster statue of what looks like two people under a duvet, but surely isn’t.

The building itself was designed by French Pritzker-prize winning architect Jean Nouvel and is situated on Saadiyat Island, planned home to the Frank Gehry designed Guggenheim and the Norman Foster Zayed National Museum, both of which are still at mirage stage.

Apparently it took 20 years to build the Great Pyramid of Giza. By contrast the new Grand Egyptian Museum next door was first mooted in 1992, was scheduled to open in 2002 and is yet to be completed.

It’s a fittingly colossal delay but worth the wait, and a partial opening is due this year. The $1 billion museum, which sits on a 50 hectare site two kilometres from the Giza pyramids, will ultimately house 100,000 artefacts spanning prehistoric Egypt to both Greek and Roman eras.

The centrepiece will be the complete collection of Tutankhamun’s tomb and if progress is slower than it was in 2500 BC, it’s only because today there are 6,000 workers on site daily. Back in the day there were 100,000.

Designing a museum to complement the Great Pyramids requires an epic architect, which it has in Dublin based practice Heneghan Peng.

Ideal homes are a particularly significant part of this year’s European City of Culture, the southern Italian city of Matera. Residents here have been redecorating their caves for 8,000 years.

The opening exhibition of the year, Ars Excavandi, is billed as the first exploration of the practices of excavation that have given rise to architectures, civilizations and rupestrian (rock) art down through the centuries. From the earliest troglodytes and their cave daubings to monuments, canals, and even cities such as Matera itself, all have been carved out of the rock. Go in August to participate in the Open Design summer school.

The monolithic fair is the ultimate destination for anyone looking to see around corners in interior design. Simultaneously exhilarating and exhausting, it takes place in January and September, at the massive Parc des Expositions de Paris Nord Villepinte, near Charles de Gaulle airport. Unfortunately it’s a trade fair reserved for décor, design and lifestyle professionals – but then which of us is not the professional architect of our own lifestyle?

One alternative for rank amateurs is to tally their visit with Paris Design Week (September 5th-14th), which is designed to overlap with the trade fair, and where you’ll find lots of events open to the public too including Le Off, an exhibition of new design talent and emerging design brands from around the world.

Stay somewhere smart in the south of France and enjoy an art and architecture walk around Chateau La Coste, a villa, biodynamic winery and art centre complex owned by developer Paddy McKillen.

It features works by luminaries such as Tadao Ando, Tracey Emin, Alexander Calder and Ai Weiwei. There’s a music pavilion by Frank Gehry, a quick brown fox from Michael Stipe and works by Irish artists Sean Scully and Guggi.

It holds exhibitions too, with one called L’âme du Metal running until March, featuring furniture and architectural elements by Jean Prouvé. Sixty pieces are presented in an exhibition pavilion designed by Renzo Piano. Bono’s been, it seems, and you can too with doubles from €650 a night.

If it’s a city break in a design hotel you’re after, check out – or rather into – the Hotel Puerta America, a luxury hotel on the outskirts of Madrid. It includes the handiwork of 19 top architect and design studios, including three Pritzker Prize winners – Norman Foster, Zaha Hadid and Jean Nouvel.

Hop off the lift on any of its 12 floors to find completely different surrounds and styles, from the gleaming whiteness of Hadid’s science fiction inspired rooms to Nouvel’s sleek, dark suites. Others involved include architects Richard Gluckman and the late Kathryn Findlay, and industrial designers Mark Newson and Ron Arad. Five star B&B from €130 a night – sold!

Warhol at the Whitney, NewYork

In the age of internet memes Andy Warhol’s predictions about 15 minutes of fame seem positively quaint. Catch up with the prince of pop art to see how the rest of his output stood the test of time at the Whitney Museum of American Art in downtown Manhattan.

The exhibition, which runs until the end of March, also includes his time capsule project – basically cardboard boxes left unopened after a house move.

You mightn’t want to book a trip just for it but if you’re in Beijing anyway and checking out the Forbidden City, just two blocks away, don’t miss the nine floor Guardian Art Centre which opened in in September.

Guardian is the country’s oldest auction house and has created what it reckons is the world’s first purpose built auction house – a one-stop art facility that houses art galleries and antiques dealers, exhibition space and onsite auction facilities.

There’s a hotel on site too, where you can watch the auctions on in house TV, make bids and stow your purchases in bedroom safes that are 1 metre wide.

In reality you’re much more likely to be watching China’s burgeoning millionaire class in action – the country’s art market is thought to have surpassed the US’s in 2016.

The centre itself was designed by German architect Ole Scheeren, who also had a hand in the city’s CCTV building, an iconic building that looks like the bottom half of a Lego figure wading through skyscrapers. If all that modernity is too much for you, rest your eyes on the traditional Chinese style complex of the National Art Museum of China across the road.