An atmospherically rich combination of image and sound 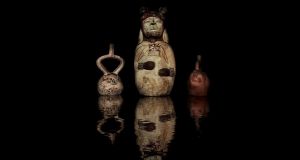 Quiccheberg’s treatise (which existed in two forms, one concise, one longer) was a reflection on the then prevalent phenomenon of Wunderkammern, the cabinets of curiosities built up by wealthy private collectors. Such collections – the antecedents of museums as we know them today – were, he argued, a legitimate means of assembling and organizing concrete knowledge of the wider world. And the grouping and partnering of objects could frame a narrative. They might also serve to enhance the value of the objects.

Implicit in his perceptive analysis is the idea that the collection might serve other, ultimately less edifying ends to the purely scholarly and investigative. He imagined an ultimate Wunderkammer, a systematic collection that comprehensively encompasses the world of natural and human creation.

There are no known contemporary examples of such theatres of wisdom (theatrum sapientiae), as he expressed it – he used theatre in a particular sense, by the way, not theatre as one might generally understand it – and sadly Quiccheberg himself died within a couple of years of his work’s publication, but the development of museums subsequently can certainly be seen as confirming his ideas.

From the beginning she has shown a flair for evoking a curious, dreamlike space, distinctively her own

Hence Ní Bhriain’s interest in Inscriptions and her use of brief extracts from the treatise in Eileen Walsh’s voiceover. Her intonation has a rueful, meditative air, matched by Susan Stenger’s score with its desolate, woodwind edge (the tap of Morse code was apparently a source, as well as the practice of keening), both in accord with the stately, elegiac pace of the dark lit footage. Ní Bhriain notes the museological role in Western imperialism.

From the beginning she has shown a flair for evoking a curious, dreamlike space, distinctively her own, in a form of video montage that seamlessly intermingles elements of interiors and landscapes, in general and very precise, detailed ways, unfolding at an unhurried pace, usually effected by a slow tracking shot across a subtly shifting scene. The presence of water has been a disorientating constant.

Inscriptions draws on three locations. One is the British Museum, a prime example of Quiccheberg’s ultimate Wunderkammer if ever there was one. In a darkened interior, the camera tracks across elements of its “earliest collection”. Ní Bhriain has in mind the impulse, exemplified in the colonial mindset, to eclipse indigenous culture and reduce it to the status of ethnographic curiosity, denying and indeed preventing its continuity. But it appears that the museum interior is slowly flooding.

Flooding is a given in the second location, a vast limestone quarry, where the camera prowls the vertiginous worked levels, encountering drill holes, machined incisions and hand painted markings to guide extraction. The suggestion is that the worked quarry is metaphorically linked to the role of the museum: the layers of geological history become apparent even as they are dismantled and dispersed.

Does the metaphor work? The quarry is a magnificent visual setting as well as an ambiguous one. Stone has long been enlisted to imperial ends, and much more. Amy Siegel’s amazing film Quarry, for example, (which has been shown in Temple Bar, incidentally), traces a block of marble from its Vermont origins to a speculative Manhattan development of mindless opulence.

An air of aftermath attends the overall work – but an unresolved aftermath, there is also a sense of simmering crisis

Ní Bhriain’s third location is far from Manhattan opulence. It is a bleak, grid-patterned accommodation centre, a set of numbered, rectangular metal huts that recalls temporary refugee housing, or something even more sinister. This – displacement, forced migration – is the net result of the imperial project, is perhaps the implication. And again, water is lapping at the floor level of these dwellings.

An air of aftermath attends the overall work – but an unresolved aftermath, there is also a sense of simmering crisis. For all the scholarly diligence of the museological enterprise, the wrenching violence of the quarrying process, in which the earth is literally ripped out of itself, is enduringly disturbing. And then there is the open question of the people we do not see, the occupants of the numbered huts. In each case, museum, quarry and camp, the organisational method, taxonomy, classification and numbering, seems ill starred. We are left with a melancholy uncertainty.

Inscriptions is an atmospherically rich combination of image and sound, a worthy relation not just of Ní Bhriain’s previous work but also that of Siegel, mentioned above, Clare Langan and Elizabeth Price.

Keanu Reeves: Everyone is talking about his new girlfriend, and it’s not why you think
10