Art in Focus: JMW Turner – A Ship against the Mewstone, at the Entrance to Plymouth Sound 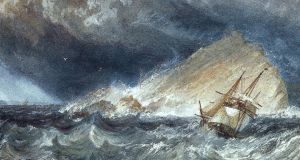 JMW Turner: from A Ship against the Mewstone, at the Entrance to Plymouth Sound. Photograph courtesy National Gallery of Ireland

What is it?
A Ship against the Mewstone, at the Entrance to Plymouth Sound is a watercolour by Joseph Mallord William Turner.

How was it done?
Turner characteristically plunges us into the heart of the action, heightening the drama as the merchantman battles the elements, adding plentiful white highlights, including the wheeling gulls. A succinct watercolour sketch, without the ship, in one of the artist’s sketchbooks clearly maps out the composition and mood. He probably made it when he visited the English West Country in 1813, staying in Plymouth, looking for subjects for a volume of engravings, Picturesque Views on the Southern Coast of England, which appeared a year later, with engravings by WB Cooke from Turner’s original works.

Many ships came to grief on the Mewstone. Turner had a close encounter with it himself, as recounted by his friend Cyrus Redding. They set out to visit Burgh Island, about 30km along the coast, which meant passing the Mewstone, but the conditions were rough. As others became violently seasick, Redding reported, Turner seemed to thoroughly enjoy the experience and studied his surroundings intently. When they arrived on the tidal island, he made some rapid sketches.

While the ship’s predicament may appear alarming, it has been noted that Turner, an experienced sailor, has quietly indicated otherwise. The vessel has reefed its topsails and has virtually made it to the haven of the sound.

Where can I see it?
The watercolour is part of the Vaughan Bequest. Henry Vaughan, who inherited a fortune when relatively young, was an avid art collector, and particularly fond of Turner and Constable – he gave Constable’s The Hay Wain to London’s National Gallery, for example. When he died he left works to several public galleries, including the National Gallery of Ireland, which received 31 Turner watercolours. Aware that they were light-sensitive, Vaughan stipulated that they be exhibited only in the subdued light of winter.

Although lighting technology has ameliorated the risks involved, the stipulation still applies, and it has become an annual ritual that the watercolours are exhibited every January. This year, at Turner: The Vaughan Bequest, in the Print Gallery of the National Gallery of Ireland from January 1st to 31st, the watercolours are complemented by plates from the artist’s Liber Studiorum, a collection of prints of more than 70 of his best-known works. Turner made the etchings and handed them to engravers expert in mezzotint, with his own sepia watercolour studies as guides.

Is it a typical work by the artist?
Yes. Turner, a landscape painter of genius, was a phenomenon as much as an artist, a driven, obsessive worker with a boldly independent vision. He is forever associated with the sea, and with light. Later in his life, the tangible subject matter in his paintings seemed to dissolve completely into abstract evocations of light, colour and space.