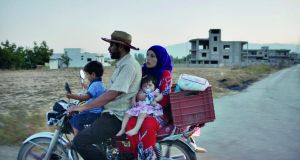 Jumana Manna’s Wild Relatives are seeds, and her film of that title uses them as a means of exploring the play of global power. The Svalbard Global Seed Vault is a huge Arctic repository of the world’s seed stock, a doomsday back-up for seed gene banks throughout the world. In a series of vignettes, Manna focuses on “the personal lives” of those “enmeshed in the international transaction of seeds.” A series of clay sculptures produced during her residency at IMMA relate human bodies to the flow of labour and power.

Sandra Hickey was one of over 100 artists who painted over 65,000 individual frames in the style of Vincent Van Gogh for the Oscar-nominated painted animation film Loving Vincent. She went on to paint a series of landscapes continuing his style. She was also working on a series of abstracted figurative works. These two strands of work are shown together at Triskel. Loving Vincent will be screened on December 3rd at 6pm, tickets €9, book at triskelarts.ticcketsolve.com.

Work by 36 artists selected from open submission by a three-member panel. Participants include Desmond Kenny, Beatrice O’Connell, Elaine Grainger, Austin Hearne, Natasha Pike, Myra Jago, Helen G Blake, Aine Phillips and Jennifer Trouton. Plus a solo show, Proverbs, by Robert Ellis, winner of last year’s Winter Open Prize. In still and moving images, plus audio, Elis explores the contemporary Ugandan landscape in the light of it past and through its proverbs.

A survey of Niamh Barry’s edge lit sculptural lighting pieces. Art meets design, usually interior design, in Barry’s flowing, linear illuminated installation works often combining bronze and LED lighting. Originally, Barry studied ceramics at NCAD but was interested in lighting, and furniture design, from the start. Then, in 2009, she devised her trademark work “a bronze, curvilinear, edge lit piece.” She has gone on to explore the form and win many commissions since.