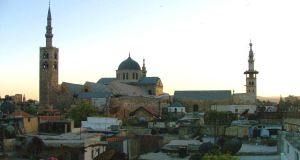 View of eastern side of the Umayyad Mosque, Damascus (715 CE). Photograph: Stephennie Mulder

Last week Stephennie Mulder, who teaches the history of Islamic Art and Architecture at the University of Texas at Austin, was in Ireland to deliver the annual Chester Beatty lecture.

The subject was her multiple-award-winning book, The Shrines of the ‘Alids in Medieval Syria. Originally published in 2014, the volume has just been published in a paperback edition – the hardback sold out and is currently being reprinted.

At first glance it may seem like a niche subject, yet it has attracted a great deal of attention beyond academic circles. As Mulder is keen to emphasise, it has much greater resonance than you might expect, in the context of the recent history of the Middle East, and the general misapprehension of Islamic culture in the West.

Originally from Salt Lake City, Mulder began her studies, which eventually encompassed art history, archaeology, anthropology and Arabic, in Utah, and went on to Princeton and Pennsylvania (she’s been teaching in Austin since 2008). What prompted her interest in Islamic art and culture?

“It’s really simple. I took a class in Islamic civilization and I realied immediately that it was something that had been missing from my education. I mean, I knew China and India had long, rich histories, for example, but the Islamic world, in contrast, had been largely written out of the history we were taught. My history of art textbook had 17 pages on Islamic art in its totality, and about 60 on ancient Roman art alone.”

She had been taught, essentially, “a European story” that was partial and incomplete. Even the European Dark Ages, she notes, weren’t that dark and were in fact an era of interaction and interconnection with the Islamic world.

From 1998 until 2010 she spent her summers working in the field in Syria, mostly at Balis, an important medieval Islamic city. “In all my time there I found the Syrians to be the kindest, gentlest, most helpful people imaginable – in contrast to the mindset of the political leadership. It’s a contradiction I still cannot quite figure out.”

She was head ceramicist on the excavations but, while in Syria, she also became interested in the ‘Alid shrines she encountered. Apart from a couple of spectacular examples, most are unremarkable, even humble, structures. But, she points out, they are mines of information.

As she explored them (eventually she documented 14 in great detail, the substance of her book) one characteristic particularly intrigued her. She goes back to the Sunni-Shia dichotomy in Islam which, she feels, is too glibly represented as an absolute schism.

Rather than seeing a sectarian opposition, she prefers the term “interpretative communities”: the Shia assign authority to a particular line of Muhammad’s descendents, but the Sunnis do not. They have a great deal in common. The ‘Alid shrines are Shia but, she points out, the evidence is clearly that they were respected and patronised by both communities, hence her book’s subtitle: Sunnis, Shi’is and the Architecture of Coexistence.

Surprisingly, Mulder’s is the first systematic study of the shrines and, she argues, is a corrective to the facile view of sectarian division. As with the period of constructive interaction between European and Islamic peoples, accounts of “accommodation and co-operation” are eclipsed by stories of conflict.

Her multi-disciplinary approach has been vital to her work. In fact, she says, in a sense her book is as much about her methodology as about the shrines. That is, as with general historians, art historians look to sources, but art and architectural historians also deal with “material culture” which greatly expands the evidential resources at their disposal.

On site, she could chart “changes in calligraphy, even in writing style”. She is currently involved with the fruits of those years of excavation at Balis, working towards publication on the stories the ceramics tell. It is gratifying to her that her ‘Alid shrines study has attracted wide readership – and garnered an impressive series of awards, including the Syrian Studies Association Award and Iran’s World Prize for Book of the Year (she travelled to Iran with her daughter for the presentation).

Her experience in Syria and other areas of the Middle East has engaged her with the threats to cultural heritage posed by war and trafficking, and she is actively involved with organisations attempting to publicise and address the problems.

Clearly aware of the importance of information, she is also a co-founder of UT Antiquities Action, which aims to raise awareness of cultural heritage loss. It is immediately apparent that she is equally passionate about scholarly standards, and she mentions the growth of what might be termed historical fake news: the appearance of supposedly factual media outlets that promulgate nonsense – myths, falsehoods, debunked theories – while deliberately blurring the line between fact and fiction.

The Shrines of the ‘Alids is published by Edinburgh University Press. Why cross the Atlantic to publish? That, she explains, is down to the presence in Edinburgh of the great historian of Islamic art and architecture, Robert Hillenbrand. Hillenbrand officially retired in 2007 (he began teaching in 1971) but is still involved with the university and has been instrumental in making it a centre of Islamic and Middle Eastern studies and publications.

The Shrines of the ‘Alids in Medieval Syria: Sunnis, Shi’is and the Architecture of Coexistence by Stephennie Mulder is published by Edinburgh University Press (£35, paperback)