The importance of interaction, and idleness 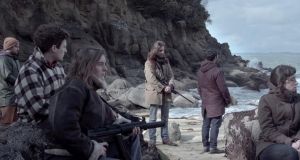 Temple Bar Gallery, Dublin
★★★★
Six short films by Lola Gonzàlez are looped on six flat-screen monitors throughout Temple Bar Gallery (Gonzàlez spent a residency at the studios there). The walls are lined with large-scale prints of stills from the films. Each work stands alone, but there are consistencies, repetitions and continuities throughout. They are strongly performative in a physical dance theatre mode, choreographed as much as, or more than, directed – and involving some collaboration with the performers. They play language games, including the use of private, personal languages and symbolic schemes and codes implicitly understood by the protagonists but obscure to us. Usually, they feature a small group of youngish people isolated in settings that are clean, comfortable and vaguely institutional, though not in a bad sense of the term. Much attention is paid to the wider landscapes, which are often beautiful.  The focus is on interactions between individuals and within the collective. Gonzàlez, a young artist whose work has received much favourable attention, was born in Angoulême in southwest France, and it’s safe to conclude that her childhood, spent in communal environments, shapes and informs her work. Group dynamics are repeatedly explored and enacted from film to film. In the outstanding Les anges, three young men move through a parched landscape on all fours, in the manner of a troop of wary baboons. On the fringes of a city, they encounter a fourth, who approaches and accompanies them, apparently attempting to help raise them upright.

Helping, guiding and supporting are recurrent tropes among Gonzàlez’s groups of people. In Rappelle Toi de la Couleur des Fraises, a self-contained group happens upon two individuals washed up on the shore and accepts – or inducts? – them into their community. Complexity attends the communal ideal; it’s not all harmony and sweetness. Summer Camp teeters between comedy and oddity as the campers exercise obsessively, compile endless lists and devour heaps of seafood, all with a fixed intensity of purpose.

More ominously, in Véridis Quo (a title referencing the Daft Punk track?), set in a wintry country house and grounds, the group is armed and much of the communal energy goes into weapons training and target practice. From film to film, the small groups are apt to gather and gaze out towards a distant horizon, as though waiting for something or someone. On these occasions they seem absorbed into a group identity, almost hypnotised.

Le Langage et l’Amitié, Essai N°1, possibly the most recent piece, is also the shortest, and takes the form of a cryptic, Godardian conversation, a language game, between a man and a woman. Gonzàlez’s work strikes a chord with Kazuo Ishiguro’s Never Let Me Go and in fact with Ishiguro generally. Where her communal childhood informs her sensibility, he arguably gained a comparable perceptual shift through moving with his family from Japan to settle in England when he was only five. Both, while seeming to address strange, even perplexing settings and communities, actually turn out to deal with the absolutely familiar, everyday world. Might Gonzàlez make a feature-length film? In her short films, as seen together here, she seems at times to rely too easily on default templates and default devices, but there’s a terrific core of achievement, inventiveness and insight that suggests great things yet to come.

Taylor Galleries, Dublin
★★★★
Ozio translates loosely as “sloth”, but Janet Mullarney, the driving force behind this three-person show, has more in mind a generative, thoughtful idleness, the momentary calm that allows ideas to percolate and lead one off in an unexpected direction. And the ideas do percolate here, from Helen O’Leary’s playful reconfigured paintings to Nataly Maier’s distillation of the classical frieze, the work on view is enormously varied in its physical form and its conceptual reach.

Mullarney has embraced the spirit of ozio, notably in embarking on a series of collages and ceramic sculptures both based on the form of a conical peak. Her starting point was “a very old sketch done on a very old envelope”. Think of the flap of an envelope, translate it into three dimensions and you have your cone. Then – and this is, frankly, speculative – add René Daumal’s unfinished, posthumously published surreal novel Mount Analogue, centred on an attempt to scale a peak that flickers in and out of visibility and accessibility, a metaphysical mountain that may connect earth and heaven, the mundane and the transcendent. It’s a line of interpretation that accords well with Mullarney’s inclination towards surrealism and allegory.

Her feeling for materials is sure, and also daring, qualities that hold for her two companions as well. O’Leary dismantles painting and then rebuilds it from scratch. All the traditional materials are there – wood, fabric, paint and a bit more – but reconsidered and recombined in structures that are evident records of her process. The works have a fragility, an exploratory delicacy, but also appear curiously durable and timeless.

Maier, German by birth though based in Italy, originally trained as a photographer, though she went on to amalgamate photography with sculpture and painting. Light and colour are central. Her main contribution to Ozio is an excellent, whole-room installation, a frieze made up of a succession of small watercolour abstracts lining the walls, each composed of three horizontal bands of colour. The colours, painted with egg tempera, she accumulated over years. They are drawn from mostly Renaissance paintings in European museums, and they set a mood, an atmosphere, to a degree that belies their modest scale. Ozio is a beguiling slow burner of an exhibition.