The Liberties: where the past and present collide 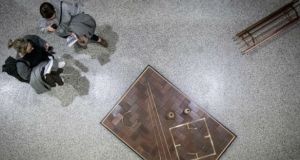 Marielle MacLeman: In the Course of Rearrangement
★★★★
The LAB, Foley St, Dublin

The title of Marielle MacLeman’s exhibition is a reference to the kind of sign that greets museum visitors at the entrance to rooms or spaces that are temporarily closed. The diverse array of works that make up her show are succinctly elegant distillations of spaces in course of rearrangement in an altogether wider context: a section of the urban fabric as it ravels and unravels through time.

In outline, what she sets out to do might sound like too much, involving as it does myriad places, personalities and events, together with more universal patterns and phenomena, but make your way through the gallery’s several rooms and it becomes clear that she has managed a kind of alchemy.

The immediate place in question is Dublin’s Liberties, and under consideration are “the histories of enterprise, labour and land use“ there.  MacLeman is not a local: Scottish by birth, she studied art in Dundee and is based in Galway, but she is a sympathetic environmental observer – and researcher, presumably, given that a quick turn tHrough the Liberties hardly imparts a sense of its exceptionally long, rich, densely layered history. That history extends from its 12th century beginnings to its industrial heyday, when it was a magnet for trades and craftspeople and associated services.

But following the Acts of Union its core activities, including wool and silk weaving, tanning, silverwork and more were targeted and undone by deliberately restrictive measures. Its decline, which played out over many generations, might have proved rapidly terminal but for the ascendency of brewing and distilling. Living conditions were poor, though in time progressive housing developments followed. MacLeman taps into aspects of this historical narrative and locates it in the current moment. Some of the first pieces you see as you enter the LAB, in the small cube space to your left, mimic flyers and posters “for a campaign”. They are imprinted on grass sheets, not paper, and bear the slogan: “Turn your rents to grass.”

She’s alluding to the advice reputedly given to the Earl of Meath about 200 years ago, that a grass crop would pay him more than rents from struggling weavers in the Liberties. Current development plans acknowledge the area’s past, and the green space deficit in the inner city. The city council’s Liberties Greening Strategy has resulted in Weaver Park on Cork St, close to Weaver Square, an urban green space in which fittings and amenity furniture are designed with reference to lost local industries. Examples of much of the actual equipment can be found in the National Museum.

Several of the pieces MacLeman has made incorporate grass from the first cut of the turf in Weaver Park in exceptionally fine, intricate, geometric patterns, beautifully evoking a combination of mechanical and organic processes. Just such a combination is involved in the production of cloth, incidentally. The bittersweet epilogue to the opening of Weaver Park was the loss of nearby allotments and an informal community garden in what had been a derelict space. The site will be given over to housing.

A veritable network of derelict sites has been evident in the Liberties for years. One ubiquitous sign of dereliction is a profusion of vigorous buddleia bushes. MacLeman has harnessed buddleia blossom, including blossom from another space in transition, the spectacular site at Bridgefoot Streeet, previously earmarked for housing but now in the process of being transformed into another Liberties park, one on a much larger scale than Weaver Park. The park’s precursor, a community garden, is saluted in the symbolic Pedestal for a park.

The buddleia blossom went into making a dye to colour wool, several varieties of Irish wool sourced by the artist, then sent to be spun and dyed, then returned to her for further dying and eventually to Ceadogán Rugs who transformed the spools of dyed wool yarn and MacLeman’s design into an actual rug. The convoluted-sounding process seems to deliberately echo globalised production practices – and apparently the bulk of raw Irish wool is exported directly, at low prices, into that international arena. The rug recalls the first cut compositions, with perhaps a more definite nod to the patterning and motifs of Celtic decorative art.

Riding the franchises alludes to the one-time practice of a ceremonial, eventually carnivalesque procession around the boundaries of the city’s franchises, notably the Liberties. But the trappings MacLeman uses, rather than celebrating a range of craft and industrial skills, feature the plastic mesh and other materials associated with bounding sites under construction, devices of exclusion not inclusion.

This brief account does not encompass every element of the exhibition, which benefits greatly from explanation. To get the most from it you’d do well to take the time to read Nathan O’Donnell’s helpfully detailed text, preferably while you’re still in the gallery. Without such explanation, and without the show’s exceptionally good installation design, in its fine-tuned subtlety the work could become bogged down in the sheer density of the network of allusions and references that MacLeman generates. But she does manage the alchemical transmutation from data to ideas, notes to music, and her work brilliantly embodies its meanings - rather than carrying them like a burden.

The project is a joint undertaking between the LAB and Galway Art Centre, and the show will travel on to Galway in March. Dominick Street is quite a different setting, but one feels that not only should the rearrangement prove a good fit, it might also reveal it in a new light.