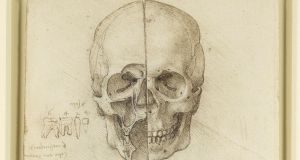 What is it?
The skull sectioned is a drawing by Leonardo da Vinci (1452-1519) and, dating from 1489, one of his earliest human anatomical studies. That year, for the first time, he had acquired a human skull. On his death in 1519, he left his vast archive of papers to his assistent, Francesco Melzi. The skull sectioned was among drawings sold by Melzi’s heirs to Pompeo Leoni. It was then listed in the possession of Thomas Howard, 14th Earl of Arundel. Its path to the Royal Collection, where it was registered in 1690, was probably via Charles II.

How was it done?
Most of Leonardo’s drawings dissolve any distinction between art and science. They are made at first hand from the world around him, whether in the form of specimens or processes, and they are direct accounts of what he saw and, often, incorporate his analysis of what he saw. The skull sectioned is the verso of a double-sided drawing. The recto depicts the cranium sectioned.

Usually Leonardo’s anatomical drawings were made from corpses he dissected himself (in one case he dissected the body of an elderly man whose peaceful death he had observed, and his drawings document atherosclerosis and cirrhosis of the liver). The precision and fluency of his draughtsmanship are extraordinary. Here, the bisected skull is shown intact on the right and then further sawn across the front on the left.  To the lower left he’s drawn examples of the different kinds of teeth found in the skull. His annotations, on teeth and skull, are made in his trademark mirror-writing, reading right to left. The drawing is made in pen and ink, with traces of black chalk evident.

Where can I see it?
The skull sectioned is one of 12 Leonardo drawings on view at the Ulster Museum, Botanic Gardens, Belfast until May 6th (nmni.com/our-museums/ulster-museum/) as part of a remarkable 12-city series of exhibitions collectively titled Leonardo da Vinci: A Life in Drawing, marking the 500th anniversary of the artist’s death. Venues throughout the UK include Glasgow, Sheffield, Liverpool, Manchester, Bristol and Southampton. Leonardo drawings from the Royal Collection (home to a staggering 550 drawings) will be on view at all of them. The 12 drawings in Belfast span the range of the artist’s extensive interests across the arts and sciences.

Is it a typical work by the artist?
Leonardo is forever known for a handful of iconic works, such as the Mona Lisa and The Last Supper (these two alone have generated interpretive speculation on an industrial scale), but it is fair to say that drawing was utterly central to everything he did. He not only observed through drawing, he thought through drawing. Drawing is all the more important given the relative sparsity of completed paintings, sculptures and other works, partly because, as with the Last Supper, they were inherently unstable to begin with, because he used experimental techniques and materials.

Also, though, because he famously evidenced a closure complex. He seemed reluctant to complete anything. En route to completion, he tended to disappear into ever-widening circles of research. His treatise on painting stalled as it gradually came to entail understanding pretty much everything about everything. As with so much else, he always intended to publish his anatomical observations, but never managed to do so. In some cases centuries passed before mainstream anatomical theory caught up with him as, for example, with his analysis of the role of the aortic valve in the working of the heart. In the final years of his life, surveying the extent of his archive when he settled in France, he realised that it would take several lifetimes just to organise and evaluate the diverse store of material he had created.