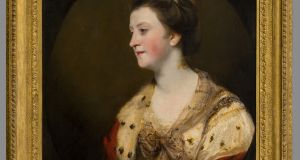 The portrait of Lady Emily FitzGerald was painted by Joshua Reynolds when she was 43.The painting originally hung in the dining room of Carton House, Co Kildare, and is now displayed in Castletown House, formerly home of another sister, Lady Louisa Conolly

Emily FitzGerald, the Duchess of Leinster, has returned to Ireland, after an absence of more than 60 years. Once called the “Queen of Ireland”, she had lived in grand Irish houses from Leinster House to Carton House to Frescati House in Blackrock (now no more). From now on she’ll hang out at Castletown House in Kildare – and anyone can visit her there.

Sir Joshua Reynolds’ portrait of Emily FitzGerald, who had quite the life in 18th-century Ireland, was unveiled last week in Castletown House, Co Kildare. The painting originally hung in Carton House, where Lady Emily once lived, and was last displayed in Ireland in 1957, since when it has been in private ownership. The Reynolds portrait was bought for £81,250 (€90,536, including premium) on July 4th, 2018, at Bonhams in London, by the Office of Public Works and the Castletown Foundation, with support from the Friends of the National Collections of Ireland.

Lady Emily had a fascinating life: married to James FitzGerald, the first Duke of Leinster, she was called the Queen of Ireland because of her role as a political influencer. Her son Edward was a major figure in the United Irishmen, injured during the 1798 rebellion and died in prison of his wounds.

Emily Lennox, goddaughter of George II, was born on October 6th, 1731. The second of seven surviving children of Charles Lennox, 2nd Duke of Richmond (who was illegitimately descended from King Charles II of England) and Lennox and Sarah, daughter of William Cadogan, Earl Cadogan. Lady Emily married James FitzGerald, 20th Earl of Kildare, on February 7th, 1747. After their London wedding they moved to Fitzgerald’s native Ireland and lived in Carton House, Co Kildare, Frescati House in Blackrock and Leinster House in Dublin.

Their marriage was reported to be happy one – difficult as that may be to credit, given Lord Kildare’s numerous infidelities – and they had a whopping 19 children together (although their last child was fathered by Lady Emily’s lover, the children’s tutor William Ogilvie; would you blame her?).

Lord Kildare became Marquess of Kildare, then Duke of Leinster, recognising his contribution to Irish political life, which many attributed to Lady Emily’s skilful political networking. After his death she caused quite the scandal when in 1774 she married the Scottish Ogilvie, nine years her junior, who had originally come to Carton as a tutor her children. She continued to be known as the Dowager Duchess of Leinster.

The portrait was painted by Joshua Reynolds the same year she married Ogilvie, when she was visiting her dying sister, Caroline, Lady Holland, in London. She looks rather stately in a pink dress and ermine shawl, within a painted oval. She was 43 at the time, and would go on to have three more children with Ogilvie. Clearly they had servants.

The painting originally hung in the dining room of Carton House, and is now displayed in Castletown House, formerly home of another sister, Lady Louisa Conolly. The FitzGeralds and the Conollys played a significant role in Irish history and Carton remained in Fitzgerald control until the 1920s (when the 7th duke sold his birth right to a moneylender to pay off £67,500 gambling debts). Emily and James had arranged a marriage for her 14-year-old sister Louisa to the Rt Hon Thomas Conolly of Castletown. Nine years older than her, Conolly was an MP with political ties to James FitzGerald. The Conollys and FitzGeralds were both major landowners and important political players in Ireland.

The portrait was commissioned when both families were at their zenith of influence.

In a letter from Lady Caroline to Emily on August 26th, 1763, Caroline advises her sister about sitting for a portrait, suggesting Reynolds. “Painters make their other portraits, I think, look the same age. You’ll be handsome enough to make the best picture in the room, if the painter does you justice. Lady Susan is very near if not quite as pretty in Reynolds’s picture as Sal [their sister, Lady Sarah Lennox], so that vast beautiful bloom is of little consequence as a picture. I would have it half a length and well done, for it’s not being so young and blooming as it once would have been that makes very little difference in a picture, except quite old people and children.”

Now OPW commission John McMahon is “delighted to be able to return this wonderful portrait of such an iconic figure in Irish public life back to Ireland”, while Jeanne Meldon and David Sheehan, co-chairs of Castletown Foundation, are pleased to acquire the Reynolds, with such historical significance to Castletown.

Matthew Russell of Friends of the National Collections of Ireland (FNCI) sees it as helping return a part of Ireland’s history. Since 1924 the FNCI has supported national cultural institutions, museums and galleries by donating art and important historical objects for public benefit of the public. “Fortunately our grant towards the acquisition of the Reynolds portrait was made possible through a recent unexpected and generous bequest.”

Castletown House in Co Kildare, Ireland’s earliest and finest Palladian house, was built in the 1720s. Managed by the OPW, it reopens for tours on March 1st. castletown.ie