Art in Focus: Gerard Byrne – Points of view in Waiting for Godot 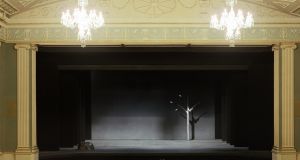 Gerard Byrne photographed the empty set of Waiting for Godot by Samuel Beckett in the Gate Theatre. Designed by Louis le Brocquy in 2002 for a production marking the 50th anniversary of the first performance of the play in January 1953, the set is closely related to the original spare presentation which featured a model tree designed by Alberto Giacometti (which no longer exists).

Byrne also made a substantial photographic series titled A country road. A Tree. Evening – Beckett’s opening stage directions. He sought out locations, in France and Ireland, where Beckett might have encountered such a scene, and photographed them under the unnatural glow of theatrical lighting.

It is included in the current exhibition of selected works from the AIB Art Collection at the RHA, Ely Place, Dublin (until March 3rd, rhagallery.ie). AIB’s collection, built over four decades under the guidance of art advisor Dr Frances Ruane, came to be one of the most important in the country, tracing the development of Irish art, including artists from abroad working in Ireland, from the birth of modernism up to 2006. In 2012, 39 key works were given to the Crawford Art Gallery, Cork. Landmark pieces by Micheal Farrell and Robert Ballagh are included in the RHA selection.

It fulfils several of the criteria. Byrne’s work is mostly lens based. And it embodies an enduring interest in theatre as one among several forms of cultural representation (others being magazines, in both their editorial and advertising content, photography itself, local radio stations, popular myths and visual art, notably the history of minimalism and its implications). Usually time plays a crucial role: in several of his best-known works, drawing on pre-existing texts. They are addressed with a kind of Brechtian alienation technique, introducing a measure of critical distance. The effect is to point up what might be termed a self-complimentary present, one that takes an implicitly patronising stance in relation to the past and assertively predicts the future. But of course the fate of each supposedly enlightened, progressive present is to date, quickly and cruelly, while the anticipated future veers off-path.

More recently, as with In Our Time from 2017, which centres on a prototypical American commercial radio station, he presents every element of the subject, including the pop music, the DJ’s commentary including traffic updates, the ads and so on, as modular components of a minimal system, one that might, theoretically be shuffled and continued indefinitely. In Our Time develops ideas on the minimalist art movement, especially the relation of minimalist art to time, and the nature of audience engagement with it.

Dublin born and Dublin based, Byrne is one of relatively few contemporary Irish artists to have built significant international reputations, and he has developed projects and exhibited widely both in Ireland and abroad.